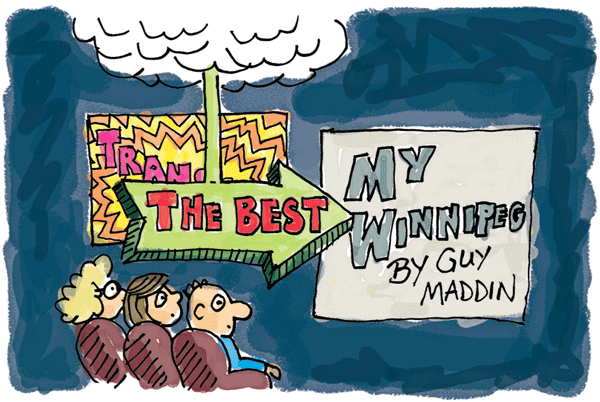 It's easy to be cynical about awards season, but a chance to promote quality is still valuable. Illustration by David Donald.

If you ever want to get your hands on an Oscar, you’ll probably have to earn it the hard way. Security is tight on those things, and the resale market starts at $50,000 and heads into the seven-figure bracket if the winner was anyone you’ve heard of. (Michael Jackson once paid over $1.5 million for Gone with the Wind’s Best Picture award.) If you’re not at all picky about your statuettes and don’t mind owning one that looks like an Oscar minus its arms and with an extra ass for a head, you could always go for a Genie. (Resale value is negligible unless it once belonged to Al Waxman.)

The annual giving of hardware is actually the culmination of several months’ worth of prognostication, deliberation, and dispensation of less glamorous awards. This period— which can stretch from early December all the way into March—is “awards season” in the movie business. It’s when the average moviegoer is suddenly supposed to really, really care about film as an artistic medium, irrespective of the hype, lies, and misleading marketing schemes she’s routinely fed for the rest of the year. It’s the time when we learn a lot about the films that are supposed to represent the medium’s highest achievement, even though most of us gain this knowledge only to better our chances in office Oscar betting pools.

It’s easy to be cynical about awards season and its rituals. (Unless, of course, you have a direct stake in one of the movies bound for victory. This year, Precious, Up in the Air, and Clint Eastwood’s Invictus are among the early faves.) After all, studios spend millions on “for your consideration” advertising, events, dinners, and everything else they do to help position their films as deserving. That includes courting the various critics organizations in cities like New York, Los Angeles, and Toronto, giving hacks who spend the rest of their year fretting over newspaper bankruptcies a brief taste of power and influence. For one brief flickering moment, it’s as if their opinions matter.

This feeling may be the main reason that anyone takes part in the shadowy processes that yield awards. And while even these participants might complain about the ever-swelling glut of prizes, citations, and Top 10 lists, on some level they know that this might be the only means to let the world know about what matters to them, especially when it comes to movies as an art form.

Speaking as a critic, I can say that opinion-making by jury or consensus—and not individual reviewers—is already the norm. Whereas a rave by Pauline Kael or Roger Ebert may have once put asses in seats, now most movies live or die by their user-generated ratings on the Internet Movie Database or the aggregated scores of reviews as tabulated by the geek wizards at Rotten Tomatoes or Metacritic.

To participate in a vote for a prize or a list—like Canada’s Top Ten, a worthy initiative by the Toronto International Film Festival group to create a more valuable guide to the year’s finest homegrown efforts, than the more industry oriented and often baffling Genies—almost concedes how little the individual critic’s voice matters. As for the moviegoer, the prizes and the lists have become another means of managing all the unruly streams of information, opinion, and invective pouring in from every direction. It’s a filtering of data that tells us the important books we’re supposed to read, the essential music we’re supposed to hear, the must-see movies we must see. All of these comprise what used to be called the mainstream and disparaged accordingly by snobs like me. Lately, it feels like an increasingly futile effort to construct some sort of fluctuating canon of Things Worth Caring About in an ever more fractionalized and factionalized culture. Prizes and lists reassure us that it’s not too late to impose some degree of order. Somehow, somewhere there’s a panel of experts who’ve done the hard thinking and decreed that, yes, the state of art is better than fine, it’s great (and here’s another masterpiece in case you were worried).

To believe that such an endeavour has value might be as naive as believing the Best Picture Oscar actually goes to the year’s best picture. (Remember: they gave one of those to Chicago.) But if three more people went to see Kelly Reichardt’s Wendy and Lucy or Guy Maddin’s My Winnipeg— the best feature and best Canadian feature of 2008 according to the Toronto Film Critics Association, of which I’m a member—because of stupid awards, then maybe it’s worth the trouble.