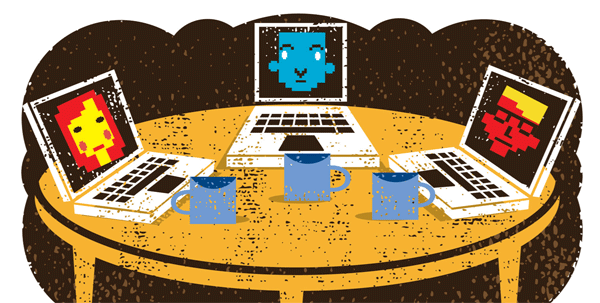 Online communities bring together people who would never talk in real life. Illustration by Matt Daley.

Though you can count the joys of graduate school on one hand—without even using all of your fingers—spending an evening with like-minded friends just chatting is definitely one of them. As the drinks flow and discussions stretch late into the night, it’s easy to feel the glow of both comfort and belonging.

But as much as I love the company of my peers, it’s hard not to notice that we usually talk about the same things in the same way. You know: Mad Men is great but problematic, and, well, what’s the deal with this Harper guy? Still, even the most polite among us have to admit that, in the interest of challenging complacency, blunt disagreement is an occasional necessity—and when everyone comes from more or less the same background, that can be hard.

The internet, that grand messy swirl of ideas, might seem to offer an answer. But alas, it suffers the opposite problem: on the web, genteel discussion is about as rare as the average unicorn. Exchange is notoriously confrontational, irrational, and pointless. Users are always warned to never feed “the trolls”—the online agitators whose sole purpose is to provoke and annoy, and who frequently capsize the entire conversation.

But if you are looking for discussion that will challenge and provoke without devolving into mudslinging, there is hope—and it comes in the unlikeliest of places. It’s called the “off-topic section.”

Case in point: it isn’t exactly something I’m proud of, but I spend a good deal of time on NeoGAF, an online message board that bills itself as the premiere video game community on the web. It may sound a bit like boasting about “the diveyest dive bar on the block,” but NeoGAF is, surprisingly, a bit of a paragon for both the best and worst of online dialogue.

Most of the chatter is about the stated subject of the site—video games. Forum moderators constantly struggle to keep these conversations on topic. As a result, NeoGAF, like almost every one of millions of web forums out there, has an “off-topic section” where members can blow off steam and rant about almost anything they want. Spend a bit of time there, and you’ll find people from radically different viewpoints actually talking about things they might hardly dare to in real life.

“A question for gay guys: would sex with a woman disgust you?” reads one naive post. “Muslim racism in Norway!” loudly claims another. But while that may sound like a breeding ground for ignorance—and occasionally is—a lot of the time, it’s the opposite. Recently, when a poster ominously linked to a piece about the failure of some newly black-owned farms in South Africa, I cringed; after all, Canadian public discourse and the web have very different standards of what’s acceptable to say, and even in a moderated space like NeoGAF, prejudice isn’t uncommon. Instead, what transpired was a generally reasoned discussion of race-based policies in South Africa, and multiculturalism in general. By the end of it, people committed to absolute ideals of equality had to admit that there were complex reasons behind things like cultural relativism or the machinations of politics and history.

Similarly, in those other discussions, a teenage boy, unfamiliar with simple truths about the fluid spectrum of sexuality, learned some valuable lessons, while a poster with a set of Islamophobic beliefs had his assumptions and discourse soundly and smartly critiqued. In engaging with viewpoints they might not otherwise hear, people were having their beliefs and views challenged in a way that would not have happened offline.

NeoGAF’s community formed around shared interests rather than a set of shared beliefs. As a result, it is composed of a staggeringly diverse group of people: young and old, male and female, left to right, and everything in between. Few things capture the site’s heterogeneity like the fact that, as I type this, a thread about the low median income for single black women sits right under one simply entitled “Boobs!”

This isn’t limited to video game communities. The same basic dynamics apply to web forums the world over, be they about urban affairs, technology, or craft-making, and in these quiet, nerdy corners of the web, people who may not otherwise talk are actually conversing.

In the offline world, this radical mixture rarely happens. Peer-groups often form because friends think the same way, and many of us spend our time surrounded by the like-minded, comfortable in the feeling that what we believe and know is right and true. It’s not so much that familiarity breeds contempt, but that it simply breeds more familiarity—what we might less generously term “a rut.” The off-topic sections of message boards offer something more hopeful: people who have gathered around a topic that unites them often proceed to talk about the topics that don’t.

Find a community that is tight-knit and with a few bright lights, and you could find real, diverse engagement often lacking in the offline world. And if you’re lucky, rather than wasting your energy feeding the trolls, you might end up nourishing your brain instead.