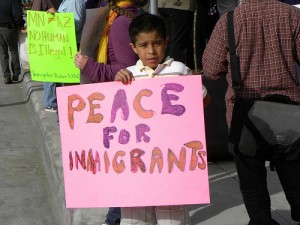 At a protest against Arizona's SB 1070 law that allows police to demand proof of citizenship. Creative Commons photo by Flickr User Fibonnaci Blue.

Canadians like to feel good about our official policy of multiculturalism, and in general there’s plenty to feel good about. But as the introduction of the ominous new law SB 1070 in Arizona in April swept the news—a law that allows police in that state to demand proof of citizenship from people in public and detain them if they suspect them of being illegal migrants—Canadians seemed blind to similar tactics being deployed in their own backyard.

We have every right to condemn Arizona’s law, but we have nothing to be smug or self-righteous about. No One Is Illegal, the national network of migrants, refugees and immigration activists who have been doing some amazing work on exactly these kind of topics, issued an alert recently reporting that Canadian Border Security Agents are working locations in Toronto’s west end, stopping people, asking for identification, and making arrests, and have already detained more than 20 people who don’t have “adequate documentation.”

This kind of “papers please” policing is sinister and—while I generally dislike this kind of phrase—un-Canadian. (As far as I can tell, this hasn’t been reported by a major news outlet, which means so far all the reporting we have is from NOII itself.) Here’s their advisory:

Immigration Enforcement is stopping people on the streets, at work, and while shopping based on their skin color and accent. This is systematic racial profiling that creates fear in our communities. It is part of the social-cleansing of Toronto in the lead up to the G20 Summits. It is the same racist policy that is being opposed vehemently in Arizona in the United States.

No One Is Illegal-Toronto has received confirmed reports that further raids are being planned specifically in the St. Clair Area THIS WEEK. [email protected] restaurants will be targeted, and ID checks based on racial profiling may take place. We believe that raids on Bloor West will also continue.

This fundamentally unjust harassment must be opposed.

Read the full alert at No One Is Illegal’s website. I’ve also submitted NOII’s report to OpenFile.ca to see if we can’t get some more reporting on this issue.