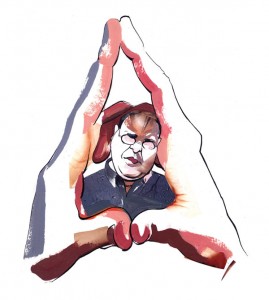 Free at last. After three years and nine months thwarting a deportation order in the sanctuary of a Montreal church, Abdelkader Belaouni became a Canadian citizen in October 2009.

Belaouni was one of the refugees I spoke to for my article “Gimme Shelter” in This Magazine’s July-August 2009 issue. At the time, he was living in the shelter of a century-old house on the grounds of Saint Gabriel church, in the Pointe-St-Charles neighborhood in Montreal. [That article is nominated for a National Magazine Award, by the way! – Ed.]

In June 2009, after almost four years of tireless campaigning on the part of his supporters (and just after the issue went to press) victory came in the form of a telephone call. Belaouni’s lawyer Jared Will, called to say the Quebec government was going to allow him to stay in the country on humanitarian grounds.

First though, he would have to complete a medical examination in Tunisia, which borders his native Algeria. The Canadian government demands such examinations for all immigrants in an effort to prevent strain on Canada’s health care system. Belaouni was worried that he might not pass the examination; he is legally blind and suffers from diabetes.

Nonetheless, he began fundraising for the trip. With the support of his friends, Belaouni collected over $10,000 from donors across Canada. He flew to Tunisia on September 23. Four weeks later, Belaouni received a call from the Canadian embassy in Tunisia. He had passed the medical examination and his Canadian visa was ready.

On October 22, he was back in Canada, now his home. His almost four year stay in sanctuary paid off. He joins the more than 150 refugees who’ve avoided deportation with a stay in church sanctuary.

The congregations act as safety nets for what they see as holes in Canada’s immigration system, namely the lack of a formal appeal system in the refugee determination process. A bill (C-291) that would see a formal appeal system implemented was being tossed around parliament at the time “Gimme Shelter” went to print. But in December 2009, it was defeated at third reading in the House of Commons. The vote was tied. The speaker broke it with a vote against.

Belaouni is grateful for the safety net his friends at Saint Gabriel’s church provided. He and his supporters say he was unfairly treated by the refugee determination system, and that a stay in sanctuary was the only remaining option. Today he lives in Saint Hubert, just east of Montreal, in a one-bedroom apartment. He looks healthier than the last time I saw him. He tells me he lost 10 lbs—credited, he says, to his daily exercise routine and raw-food diet.

He is also fulfilling many of his dreams. The album he completed while living in sanctuary is now available on iTunes. He has two books in the works, one about his life and the other about the Algerian revolution. He is also set to start work at an immigration center in Montreal at the end of May.

I caught up with him on May 17, the day before his 43rd birthday. Here are a few minutes of our chat.