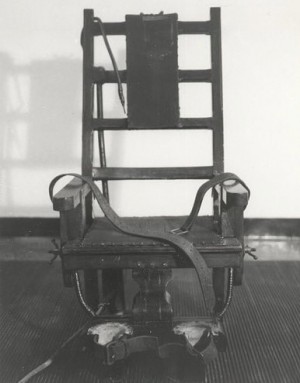 The camera rolled as a three-drug cocktail was shot into Andrew Grant DeYoung’s arm, there in a prison in Jackson, Georgia. It captured De Young as the injection reached his veins and killed him, thus carrying out his sentence, and granting him a spot in the history books as the first man in America in almost 20 years to be filmed during his execution.

That was on July 21, 2011. And the irony was likely lost on De Young and his executioners that, only days before this execution was filmed in the interest of scrutinizing lethal injections, Canada was entering its thirty-fifth year without the death penalty.

On July 14, 1976, the House of Commons voted to strike capital punishment from the Canadian Criminal Code. The road to abolition had been a long one. The first time an MP had introduced an anti-capital punishment bill was 1914, and several more such bills would be shot down over the following decades. After 120 years, and 710 executions, Canada’s capital punishment laws were pretty well-ingrained into judicial society.

It wasn’t until 1956 that Parliament even considered removing the death penalty as a punishment for youth offenders. But by the end of that decade, politicians and the public alike had begun to question the humanity of capital punishment and its effectiveness as a deterrent. Anti-death penalty protesters had started picketing executions, serving as foils to the rabid crowds who had once gleefully swarmed public hangings.

As resistance to capital punishment grew, the death penalty was removed from several crimes, including rape and some murder charges. By 1963, it had become de facto policy for the federal government to commute death sentences and, in 1967, a moratorium was placed on capital punishment for all crimes except the murder of on-duty police officers and prison guards. Nine years later, total abolition was made official. The vote on the hotly contested bill, which had prompted Prime Minister Pierre Trudeau himself to take the floor and make a plea for abolition, transcended partisan lines, and split Canada’s MPs 131 to 124.

Thirty-five years on from that landmark legislation, and nearly 50 years after the last executions were carried out, debate over the death penalty in Canada still rages on. Public opinion has almost always favoured the death penalty in theory, if not in actual practice. A poll conducted by a private research firm this past January found that 66 percent of respondents support capital punishment in some cases, though only 41 percent of Canadians surveyed actually want to see the death penalty reinstated. Those figures are still astonishing considering how long Canada has been without capital punishment, and that the only attempt to reinstate it was defeated in 1987, 148 to 127, an even greater margin than the one in the original abolition vote.

Is there an empirical reason for the continued support of the death penalty, or the need for harsher sentences in Canada? The numbers would suggest not. Canadian murder rates have been on a steady decline since their peak in the mid-1970’s, the years leading up to abolition. As of 2009, the murder rate was at its lowest in 40 years. There has never been any conclusive evidence that abolishing the death penalty directly results in lower murder rates, but the trend debunks the theory that capital punishment is necessary to keeping murder rates low. What’s more, according to Amnesty International, the conviction rates for first-degree murder cases doubled, from 10 percent to 20 percent, within ten years of abolition, the implication being that the high stakes of capital punishment actually got in the way of justice.

Although the PM also insisted he has no intentions of trying to reinstate capital punishment, his remarks sparked a minor furor during the recent election, as members of the opposition suggested that a Conservative majority would push the death penalty back into the lawbooks. But the most notable controversy surrounding the PM and his stance on capital punishment has been over the case of a Canadian fighting his own death sentence in the United States.

A Canadian on death row

In 1999, Alberta-born Stanley Faulder was put to death in Texas, becoming the first Canadian in almost 50 years to be executed south of the border. In the run-up to his death, the Jean Chrétien government tried to have Faulder’s sentence commuted, but the appeal was rejected by Texas’s then-governor, George W. Bush. Today, with another Canadian facing the death penalty in the States, the government is less interested in helping.

Ronald Allen Smith, of Red Deer, Alberta, has been on death row in Montana since 1983. His death sentence has been overturned three times and, each time, he has been resentenced with the same outcome: death by lethal injection. Just as they did in Stanely Faulder’s case, the Chrétien government went to bat for Smith. Throughout the early years of his appeals, Canadian officials had stayed in constant contact with Smith’s council, and made a formal request for clemency on his behalf in 1997.

Clemency requests for Canadians sentenced to death in foreign countries had been standard government policy at the time. But Harper’s Conservatives, who took power in 2006, changed that policy, announcing that they would not seek clemency for multiple murderers convicted in democratic states. They withdrew their support for Smith in late 2007, prompting Smith and his lawyers to appeal to the Canadian Federal Court. A judge there determined that the government had to follow the old policy until a suitable replacement was enacted, and Harper finally complied, and the Canadian government resumed its talks with Montana officials. Smith has currently been granted a stay of execution while he fights a civil court battle against lethal injections, which he argues are unconstitutional.

Thirty-five years after it abolished capital punishment, Canada continues to soldier on without it, in spite of the opinions of 41 percent of its populace, and even the personal opinion of its prime minister. The U.S., meanwhile, continues to hand out death sentences in all but 14 states.

But American capital punishment laws are being challenged, as some people look to revive the brief ban on executions that existed between 1972 and 1976.

The execution of Andrew Grant DeYoung, was filmed in order to determine the effectiveness of the drug pentobarbital in sedating condemned criminals during lethal injections. The video will be used in the appeal of another inmate on Georgia’s death row who, much like Ronald Allen Smith, is fighting his death sentence on the grounds that execution constitutes cruel and unusual punishment.

These men’s appeals will bring before American courts the same question that was put to Canada’s legislators 35 years ago. Is the death penalty fair and just in a liberal democratic country? At the end of that long debate, it was Pierre Trudeau who, as was so often the case, provided the most eloquent, definitive answer:

“I do not deny that society has the right to punish a criminal, and the right to make the punishment fit the crime, but to kill a man for punishment alone is an act of revenge. Nothing else. Some would prefer to call it retribution because that word has a nicer sound. But the meaning is the same. Are we, as a society, so lacking in respect for ourselves, so lacking in hope for human betterment, so socially bankrupt that we are ready to accept state violence as our penal philosophy? … My primary concern here is not compassion for the murderer. My concern is for the society which adopts vengeance as an acceptable motive for its collective behaviour. If we make that choice, we will snuff out some of the boundless hope and confidence in ourselves and other people, which has marked our maturing as a free people.”