Thousands of people who experienced the G20 summit weekend in Toronto have their own individual stories—some of them terrifying, we’ll have some from our own correspondents soon—and Twitter was one of the main ways that the narrative was shaped. Lots of people took their smartphones into the streets to document the protests and the police responses, and anyone following along on Twitter got a much clearer picture of events than people watching broadcast news, and they got it faster. The experience even turned some Twitter-skeptics into believers. Here are seven notable tweets that shaped our understanding of this lost weekend.

The police knew that social media was going to play a prominent role in the protests, and so they had a presence on Twitter, Facebook, and YouTube, to communicate and to try to exert some measure of spin control. On Saturday, after protesters engaging in Black Bloc tactics broke windows and set fire to several damaged police cars, the Integrated Security Unit tweeted their awareness and reassured followers that the police reaction would be “balanced”:

But it was not to be. Police actions just a few hours later got wildly out of hand. Steve Paikin, host of The Agenda on TVO, was at the Novotel demonstration on Saturday night and his tweets showed that you can still shock a veteran news reporter who’s seen it all. After his experience, he wrote a now-widely-cited blog post that pulled no punches with its blunt headline, “An Awful Night for Democracy in Toronto“: 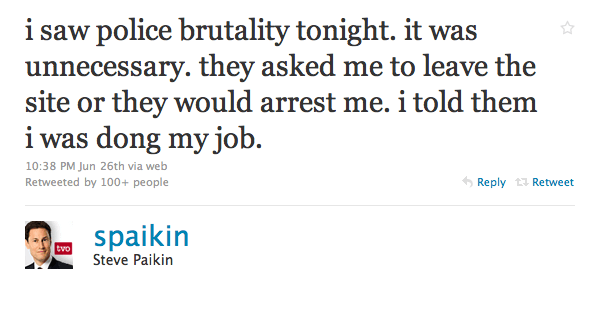 You don’t have a social media news revolution, of course, without some social media internet-meme jokesters coming along for the ride. Riding the coattails of @MontrealCopCar—the Twitter account that instantly popped up after spectators burned 16 Montreal police cars in April 2008 to celebrate a hockey victory—@Torontocopcar was online before the flames were extinguished.

The mood was considerably darker Sunday afternoon when security forces cordoned off the corner of Queen and Spadina, saying they had evidence there were people within a small group of marchers along Queen West intent on committing more vandalism. As storm clouds loomed, ranks of riot police “kettled” everyone in the intersection, including several tourists, passers-by, people waiting for the streetcar, and more. Among the crowd was Globe and Mail writer Lisan Jutras, who quickly felt the vibe change…

…While Justin Stayshyn also tweeted from inside the kettle that many of the people being detained were curious onlookers, not troublemakers:

Not that it mattered. Police ultimately kept the majority of people inside the cordon, in a torrential downpour, for roughly five hours. News of the baffling police action travelled fast and far, prompting Roger Ebert to make the historical connection that the kids and their iPhones couldn’t:

Shortly after, Tony Clement, Canada’s minister of industry, merrily chirped what a grand and successful affair the whole thing had been, taking the prize for Most Fatuous Public Statement Of The Evening: 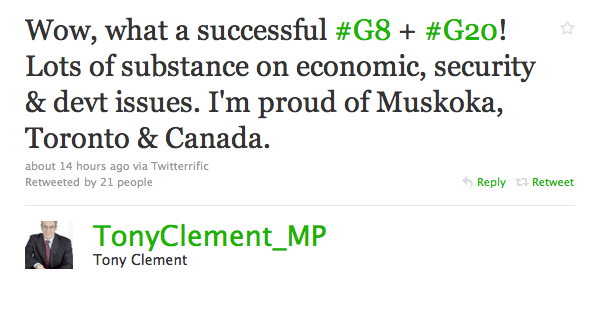