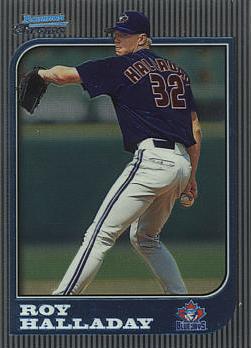 I miss you, Roy Halladay.

I remember when you did what you’re doing right now for the Phillies for the Jays. It was just last year. How could I forget? You were the reason—perhaps the only one—local fans continued to return to the Rogers Centre. The few bums that were in the seats were there for you, not for the team. When somebody had an extra ticket, the first question that anybody asked was, “Who’s pitching?” The only answer that meant anything was Doc Halladay. In a sports-mad city, you were the only thing that kept baseball relevant.

This season you’re ripping it up in Philadelphia, your first year in the National League, dominating the competition the same way you used to in Toronto. You’ve been on the hill four times so far and your record is a perfect 4-0. You already have two complete games and have given up a miserly 26 hits in 33 innings-pitched. Your ERA is under one. You’ve struck out 28 hitters and walked only three. There’s no doubt you’re the best pitcher in baseball right now and you’re probably the best player in the game, too.

The thing about you, though, Roy, is that you mean so much more to a ball club—and to a city, maybe even a country—than just what you produce. Everybody loves you for your humility and your blue-collar attitude. You’re a workhorse and a gentlemen. Players respect you, fans adore you. You may not be warm and cuddly, but your focus in unrivaled. Toronto couldn’t give you a chance to get what you ultimately wanted—a chance to win—so you moved on. It was the kind of break-up that was best for everyone involved.

But that doesn’t mean we don’t miss you every fifth day. Sure, the Jays got off to a hot start. But, really, they always do. We know they’re just a tease.

More so than any other sport, baseball is a pasttime. An American one at its heart, but there were times when the sandlot game gripped the whole country. I can remember the halcyon days when the SkyDome was packed to the rafters every day. When the team was loaded with players who had your competitive fire, Roy, people who had your character. Joe Carter, Roberto Alomar, Devon White, Kelly Gruber, Pat Borders, Paul Molitor. The list goes on. I remember how not just the city of Toronto but the entire country got behind the team. I remember living in Vancouver and watching as the Jays brought the World Series to Canada for the first time.

The Blue Jays could be called a national pasttime then. They created conversations across the country the way hockey and curling do. People watched for the sport itself and for the emotion that came with it. Today, Torontoians watch baseball to drink beer in the sunshine. Today, there seem to be more empty seats than filled ones at the Rogers Centre. Today, I couldn’t imagine a 10-year old in Vancouver getting behind the Jays.

You were the only thing that reminded me of those days, Roy. You might not have played on those teams, but you symbolize their greatest virtues. You were a bridge that connected the good ol’ days of the past to the sad-sack days of the present. But you still made the game—or at least the games where you were pitching—worth watching. I wish you luck, Doc, because you deserve better.

Baseball in Canada just isn’t the same. And, honestly, I don’t think it will be for a while.