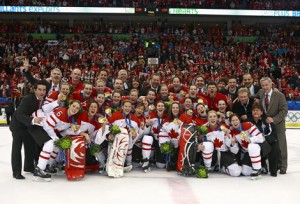 Guest blogger Canice Leung recently wrote in this space that Canada’s “national sport,” our beloved ice hockey, has became too elitist, too expensive and too inaccessible to maintain its position near to the top of the Canadian cultural hierarchy. Sparked by a fiery debate on Twitter the day before, her words were thought-provoking and insightful and her column provided an valuable perspective—one that those of us closely connected with the game often forget. And though I agree with the spirit of Leung’s argument, I have have to take issue with her conclusion, that hockey does not and should not represent this country.

She is right to point out that sport in Canada is a multimillion-dollar industry and that in certain respects it has become increasingly elitist and inaccessible. As Leung notes, higher-end ice skates alone can cost upwards of $600 and that’s just one piece of the bounty of expensive gear required to the play the sport at any level. Also, rinks are expensive to maintain, so ice-time is scarce and registration fees for youth hockey leagues are exorbitant. Just last week, the Greater Toronto Hockey League, the minor hockey association for the city that is supposed to the most diverse on earth, announced it would be doubling its fees next year. All the GTHL’s 512 teams will now pay $2000 to register a 16-player squad in order to cover the $500,000 hit the league expects to take with the introduction of the Harmonized Sales Tax in Ontario in July.

As Leung argued, circumstances like these make any sport—or any endeavour, for that matter—self-stratifying. Sure, there are bursaries, hand-me-downs and other equalizing measures out there. But with decreased accessibility comes increased elitism. More immigrants and second-generation Canadians may be filling roster spots in the game’s professional ranks. Yet there are also fewer opportunities for the less affluent to have a shot at playing the game at its highest level. For Leung, that means that when hockey is “put on a cultural pedestal, it demands a fairness and accessibility that befits the morals of the country it represents.”

But, for me, it’s still the national game.

The reason hockey needs to be more a more accessible and more equitable sport is precisely because it’s so deeply interwoven in our collective identity. Opening the sport to a wider, more diverse sample of Canadians will not only increase its already massive audience—10.3 million Canadians tuned in to the Olympic quarter-final against Russia; 21.5 million, nearly two-thirds of the country, for the gold medal match-up with the United States—and support other values we hold close, but also deepen the talent pool and make us that much better at, that much more connected, to our cherished national pastime.

When Leung writes that “in modern-day Canada, the idea that the sport represents us all seems anachronistic,” I think she may be missing the point. In today’s world, there is nothing that is going to perfectly represent us all. Hockey is for some, not for others. But the shared experience of sport can unite us and hockey is that shared experience for Canadians. The beauty of sport is that you don’t have to play it to take part in it—the Olympics final the perfect example of just that. It’s the overwhelming emotion and excitement coupled with hockey’s rich folklore that brings people together in one collective act. The fact that so many of us tune it on a nightly basis is what makes it ours.

Granted, it’s a shame the women’s game doesn’t get the attention it deserves—but that is true of all female sports and Canadian women’s hockey is probably in a better state than most. Plus, that culture is rapidly changing, particularly at the amateur level where more young and talented female athletes are playing competitive sports than ever before. They, too, share in the collective hockey experience and are increasingly becoming an active part in shaping it.

Of course, that doesn’t mean we shouldn’t apply a critical lens to our national game, giving it a free pass simply because we love it. More access and more representation will only make our game bigger, better and more of a positive force in shaping Canada’s culture. Leung’s point is an important one and very well taken. But there’s still something distinctly Canadian about that good ol’ hockey game.