This week we learned that government transparency in Canada is in pretty bad shape with the release of the information commissioner’s report. But it’s not all bad news: Two new websites have launched in the past few days that aim to shine a light on the activity of government, civil servants, and elected officials. 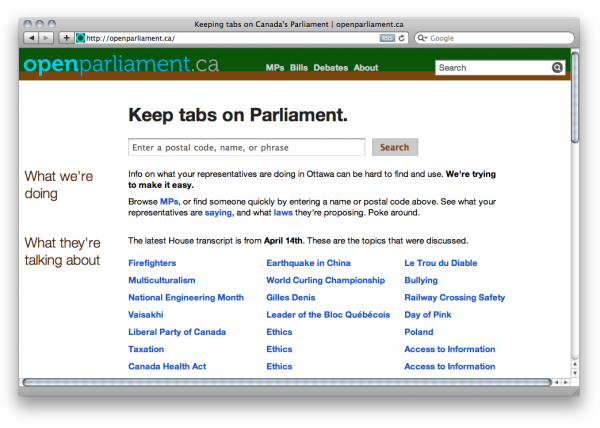 April 10 saw the launch of OpenParliament.ca, which aims to make it easier to follow what’s happening on the Hill. You can quickly and easily search for topics, people, communities, and more, and see what’s in Hansard, the official record of what’s said in the house of commons. Hansard has been available online officially for some time, but the interface is clunky and unhelpful; OpenParliament is much more user-friendly and speeds the process up considerably. You can sort the records by the activities of individual MPs, particular bills being considered, and subjects up for debate. The site also provides RSS feeds or email alerts that you can subscribe to, giving you instant updates on what parliamentarians are up to. Click on Libby Davies’ profile, for example, and you’ll see what she’s Tweeted, mentions in media outlets, motions she voted on, and statements she made in the house. Individual Bills also get profiles, collecting together who their sponsors are, who voted in favour or against, and what stage it’s at in the digestive tract of Canadian democracy.

The strength of OpenParliament.ca isn’t the information itself, which was always publicly available; its strength is that it pulls it all together in a way that is intuitive, fast, and beautiful. We’ll definitely be keeping an eye on it. You can also follow @openparlca on Twitter. 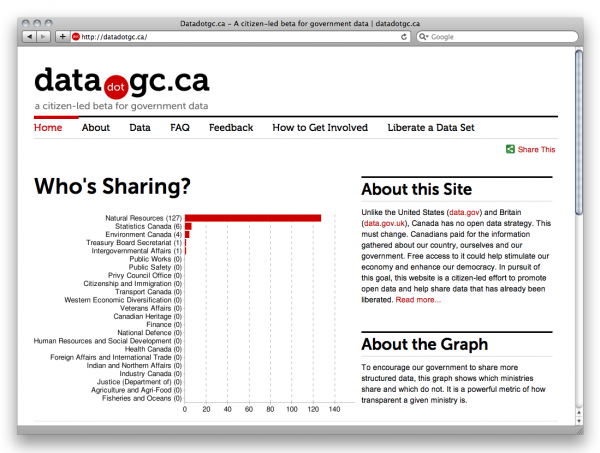 Just yesterday, writer/activist/consultant David Eaves threw the switch on Datadotgc.ca, another citizen-built website meant to liberate the flow of government information. Here’s their own statement on the purpose of Datadotgc:

Unlike the United States (data.gov) and Britain (data.gov.uk), Canada has no open data strategy. This must change. Canadians paid for the information gathered about our country, ourselves and our government. Free access to it could help stimulate our economy and enhance our democracy. In pursuit of this goal, this website is a citizen-led effort to promote open data and help share data that has already been liberated.

The site displays a chart on its front page showing the sources of its data, and which ministries and departments are providing open access to government data, to how many documents and databases; tellingly, the bar chart shows a bunch of zeroes, for everything from the Privy Council to Defence to Health Canada to Fisheries and Oceans. Unlike OpenParliament, which launches with 16 years worth of publicly accessible records already loaded, Datadotgc.ca (a homophonous play on the .gc.ca government of canada domain extension) will grow over time as volunteers add more links to the database. The project seems more technically complex, focused on building a huge structured database that will be of use to democracy nerds who want to build other sites (like OpenParliament) that slice and dice raw information in helpful ways.

So, while the government may not be getting more open, citizens are doin’ it for themselves with projects like these two. Got more examples? Leave some links in the comment section below!