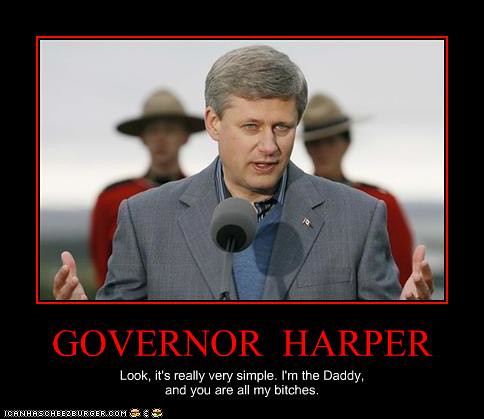 [Editor’s note: an experimental guest post today from online-culture columnist and Tumblr-er Rea McNamara, in Skype-chat-conversation with Jesse Hirsh. The large screengrabs of that chat below may not display 100% correctly for everyone, please let us know if you have insurmountable trouble.]

TGIF, if only to sit back and click through the old media misunderstanding of the on/offline anti-prorogue sentiments.

Yes, the “zeitgeist of self-flaggelation” involved in the Canadian Against Proroguing Parliament FB Group has been blogged about already: Group member numbers that now exceeds the population of Sault St. Marie, the social networking grassrooted acumen of a non-johnnyblog who’s just your average non-political activist who then has to deal with scoffing attention-diverting comparisons to “the membership of a dancing lobster fan club”. (Nevermind those Economist laments!)

And it’s understandable, especially given the greater dismissal of democratic action via the social networks (like the ‘slacktivism’ dismissal of last year’s “Twitter Revolution” story). But when you have a US Senator arguing for social networking to be a key component in foreign policy making, it’s worth re-assessing the framework to which we examine social networks.

Why do we focus on the how-many-people-joined-this-Facebook-group argument, when we should really be considering how the online interwebbed real-time streams of RT’s/bit.ly aggregation/’motivational’ Flickr photomanips is re-addressing our age-old how-many-ppl-went-to-this-rally protests? After all, those protests were staged for old media lenses and sound bytes. But when you got Conservative blog trolls hounding MSM op-eds, how does one register effective on/offline political dissent?

This is something that Jesse Hirsh — a former anarcho-syndacalist who founded both A-Infos and the Toronto-based tech activist project OAT — skimmed the surface in his much RT’d (over sixty times!) blog posting “Canadian Democracy in Crisis: A Challenge for the Creative Class”. Now an internet strategist/researcher/broadcaster, the tech expert argues that the Richard Florida-tagged crew needs to collaborate/connect/etc. on a diversity of tactics to prevent old media’s “compartmentalization” of the prorogue story.

So what better way to talk further with a ‘tech expert’ on his popular blog posting? Via Skype, of course. (Cue a Cole’s Notes version of an hour’s worth of screen grabs, after the jump.) 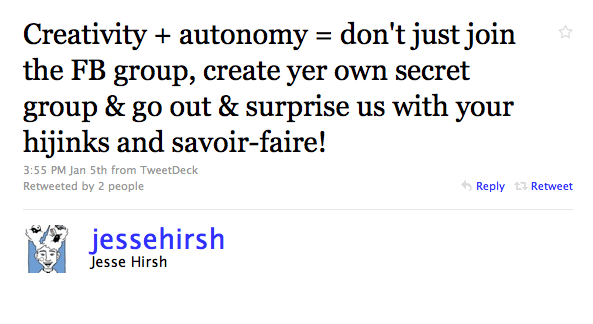 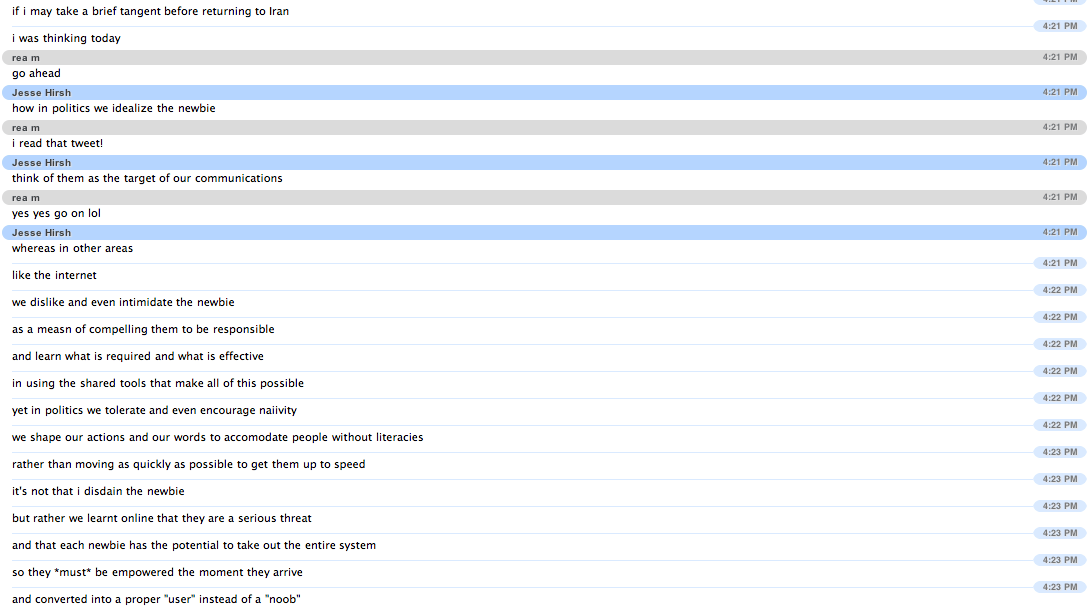 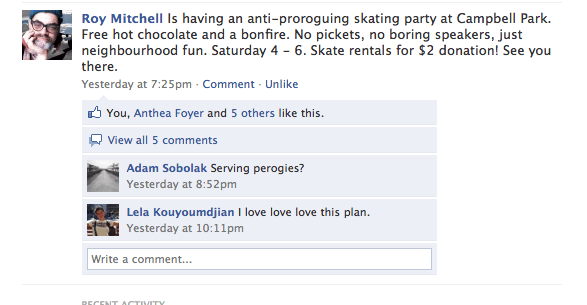 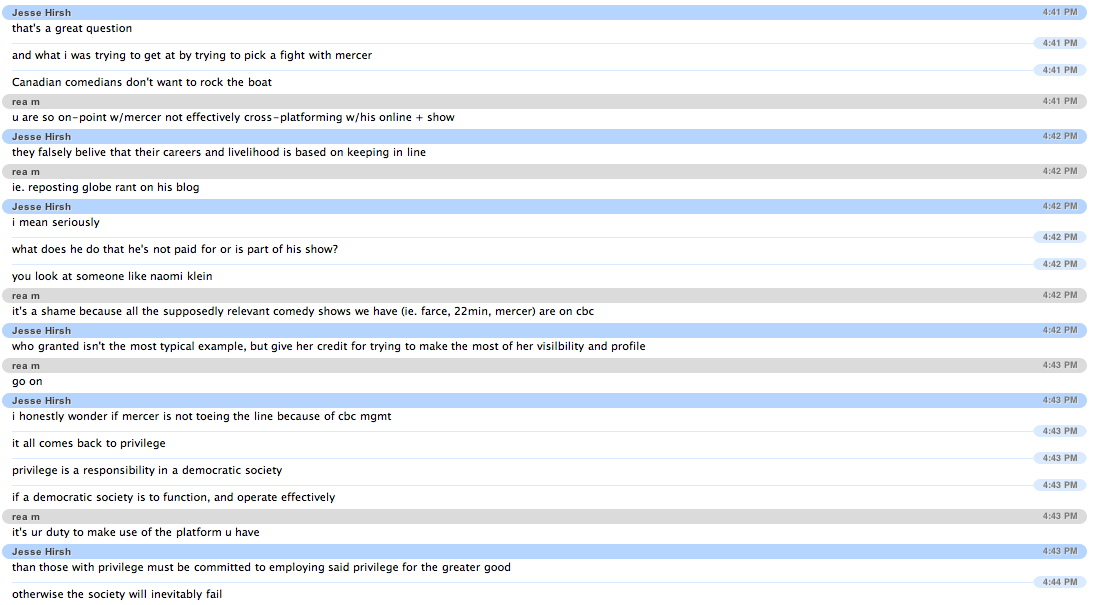 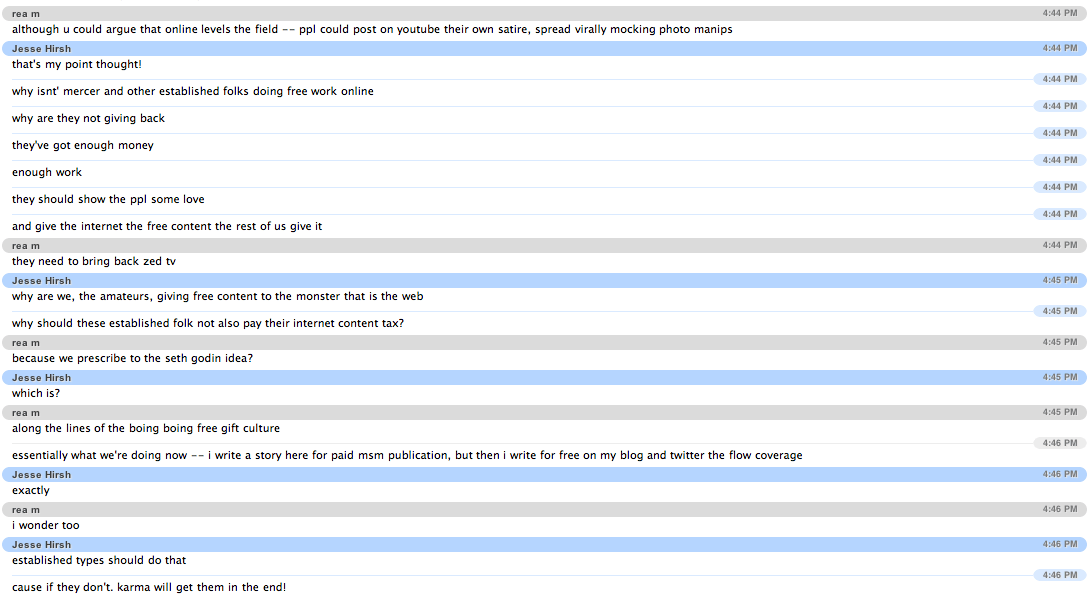 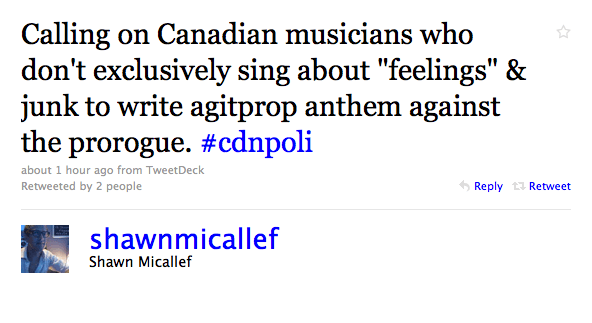 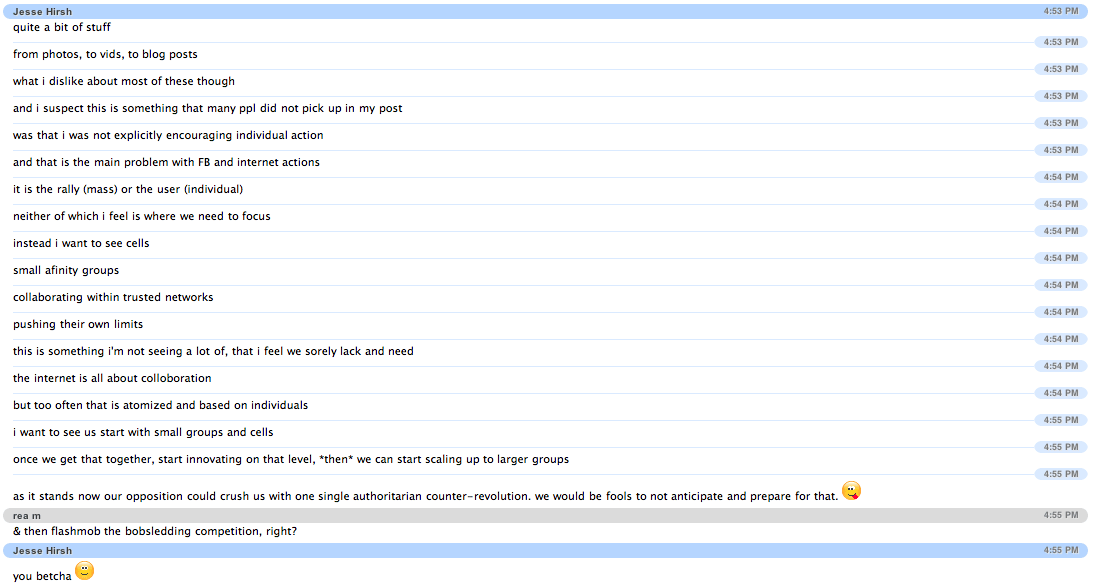