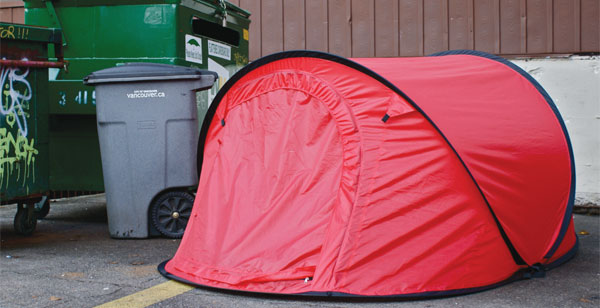 One of Pivot Legal Society's Red Tents on the streets of Vancouver during the 2010 Winter Olympics. Photo by The Blackbird.

The five-ring circus has rolled out of Vancouver, but the tents are still up. Hundreds of red tents, which became as much a symbol of our 2010 Games as those maple leaf mittens, won’t be coming down until we get our housing legacy. That’s the pledge of Pivot Legal Society, the non-profit legal advocacy organization that launched the campaign as some 350,000 visitors descended on Vancouver in February to soak up the so-called first socially sustainable Olympics.

The Red Tent campaign was pitched in response to the predicted shortage of shelter beds in the city during the Games and the failure of the Vancouver Olympic Organizing Committee (VANOC) and its government partners to deliver on promises related to housing and civil liberties. The distinctive tents bear the statement, “Housing is a Right. This tent is protected by Section 7 of the Charter”—the right to life, liberty and security of person. They will be popping up in urban centres across the country as Pivot expands its action, which was inspired by a landmark constitutional case: last December, the B.C. Court of Appeal upheld the right of homeless people to set up temporary shelters on public property when they have nowhere else to go. The campaign will continue until, Pivot says, the ultimate Olympic legacy is realized: A funded national housing strategy. Canada is the only G8 country without one. In April 2009, NDP MP Libby Davies (Vancouver East) stepped up to the podium with a private member’s bill to push for adequate, accessible and affordable housing for all Canadians, but the Conservatives didn’t support the initiative. There were Olympic dreams that Vancouver would set a golden example of how to tackle homelessness, but when the road to the Games got bumpy, promises were torched. Let’s look at what happened.

During the bid stage in 2002, a coalition of environmental and social activists and academics formed the Games-neutral Impact on Community Coalition with “the purpose of maximizing the opportunities presented by the Games and mitigating the potentially negative impacts on Vancouver’s inner-city neighbourhoods.” The IOCC successfully pushed for a referendum on the Games, and together with the bid committee and its government partners, developed the Inner-City Inclusive Commitment Statement (PDF), a set of promises that was incorporated into Vancouver’s bid book and was considered binding.

The statement addresses 14 areas—including civil liberties and public safety, housing, and input into decision-making—and makes 37 specific promises. It’s been touted as an unprecedented pledge by a mega-event host city to work with low-income communities and promote social sustainability, but it materialized into little more than public relations puffery.

While the city boasted about hiring binners to collect bottles and cans left around town (meeting a commitment under employment and training) and VANOC proudly made 100,000 event tickets available for $25 each (ticking off the box next to affordable Games events), housing and civil liberties promises were glossed over.

After a quarter of Vancouverites cited homelessness as their greatest concern in a 2006 poll, ignoring the housing crisis was a Quatchi-sized gaffe. Worst of all, it broke the promise that no one would be made homeless as a result of the Olympics.

According to the Metro Vancouver Homeless Count, the number of homeless people in Vancouver increased by 135 percent from 670 in 2002 to 1,576 in 2008. The tally is believed to greatly underestimate the reality, given the difficultly in tracking down and interviewing the homeless, and housing advocates estimated there were between 4,000 and 6,000 homeless during the Olympics. (There were an estimated 5,500 athletes and officials.)

There was a promise that no one would be involuntarily displaced, evicted or face unreasonable increases in rent due to the Games. But according to the IOCC, approximately 1,300 low-income single room occupancies (SROs)—many contained in old hotels on East Hastings and considered the last option before homelessness—have been lost since the bid was won and the city is not following its own policy to replace rooms at a one-to-one rate. The city defends its record, making another promise that from 2003 to the end of 2012 it will have nearly 2,000 additional non-market units built, compared to a loss of over 1,400 units. However, these numbers don’t take into consideration rent increases that have made SROs unaffordable for low-income residents, nor does it account for rooms held vacant by landlords. Further, the city counts provincially owned rooms as new social housing, when they are newly social, but not new accommodations.

Before the Games, condos were outpacing social housing in the Downtown Eastside at a rate of three to one, and SRO residents were being booted out of their homes as landlords renovated so they could raise rents and make room for Olympic visitors. The IOCC went so far as to file a human rights complaint with the United Nations in July 2009 (PDF), saying hundreds of renters could be evicted prior to the Olympics because of loopholes in tenancy legislations, which allows for these “renovictions.”

An early version of the Inner-City Inclusive Commitment to provide affordable housing proposed by the city of Vancouver included a three-tier housing model at the Olympic Village: market price, moderate income and core-need. However, when a new city council was elected in 2005, one of its first moves was to play Monopoly with the model and commit only 25 percent of the units to “affordable housing,” and of those 252 units, between 30 and 50 percent for core-need individuals. In February 2009, the city reported that the cost of affordable housing at the village had risen from $65 million in 2006 to $110 million. And as of print time, housing advocates feared the plan would be axed completely (the city said a final decision was yet to be made).

Since they failed on the housing front, in a desperate attempt to clean up the streets before the Games, the B.C. Liberals pushed through the controversial Assistance to Shelter Act in November. Dubbed the “Olympic Kidnapping Act,” the law gives police the power to haul homeless people off the streets, pile them into paddy wagons and deposit them at shelters when there’s an extreme weather alert, which can occur in Vancouver when the temperature hovers around zero and there’s heavy rainfall (read: winter in the city). After activists rallied against the act—housing experts came forward to denounce it and Pivot said it was prepared to challenge its constitutionality in court—the chief of the Vancouver police said his officers will only use “minimal, non-forceful touching” to persuade people to accept a lift to a shelter, and will back off if they are met with resistance.

Another Inner-City Inclusive commitment was to commit to a “timely public consultation that is accessible to inner-city neighbourhoods before any security legislation or regulations are finalized,” but the community only became aware of the draconian act when a document leaked, and hasn’t been involved in any meaningful consultations.

In a last desperate attempt to quell negative media attention, BC Housing and the city teamed up to intercept international journalists at the edge of the Downtown Eastside, before they could get to the gritty stretch. They set up an information centre, Downtown Eastside Connect, at the shiny new Woodward’s site, where they shared their “successes” in tackling homelessness, including the building of social housing on 14 city-owned sites. There’s no mention of the fact that construction of these sites was delayed and not one was ready in time for the Games. The cost of the propaganda kiosk: $150,000.

Inevitably, foreign journalists found their way to the Downtown Eastside and wondered how the world’s first “socially sustainable” Games could look like this: Human wreckage, open drug use, prostitution, crumbling buildings. And a legacy of red tents instead of homes.

How could all of these promises be broken? There was no budget to implement the recommendations, including no funding for an independent watchdog; there was no enforcement mechanism and a lack of accountability; many of the goals were not measurable and the statements were wishywashy and open for interpretation. But perhaps that was the point: Get Vancouverites behind the bid with promises of social sustainability, and then hope we forget about it when the circus comes to town.