B.C. Aboriginal groups are divided on the Olympic issue 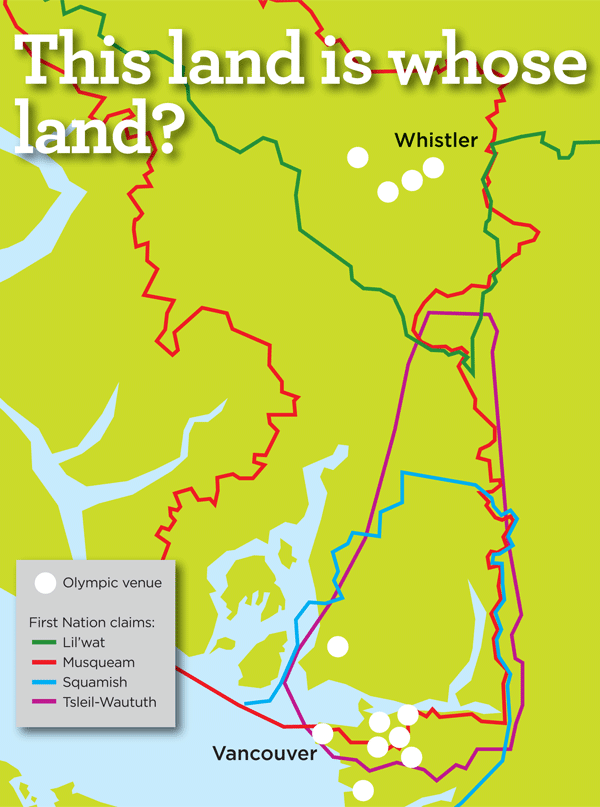 British Columbia’s First Nations are divided in their support for the Olympics. On one side, the chiefs and band councils of four indigenous communities—the Lil’wat, Musqueam, Squamish, and Tsleil-Waututh—have endorsed the Games and set up the Four Host First Nations Society, an offi cial Olympic partner and organizer. On the other side, some of the most vociferous and vocal anti-Olympics activists come from within these same groups. Many in leadership positions view the Olympics as an opportunity to share First Nations culture with the world and a source of revenue that will aid their people; others see the Games as a threat to Indigenous culture, including their traditional lands and livelihoods.

With a few small exceptions, British Columbia is legally Indigenous territory. The Royal Proclamation of 1763 states that the Crown must sign treaties with the Indigenous people before land can be ceded to the colony. While many such treaties took place, the Government of the Colony of British Columbia failed to negotiate treaties, which is why B.C. is the only province not covered by them. Therefore, B.C., for the most part, is unceded—stolen—Indigenous territory.

According to Gord Hill, from the Kwakwaka’wakw Nation and editor of No2010.com, the division in Indigenous communities around the Olympics stems from the band council structure itself: “The Indian Act is divisive and was always meant to install a pro-government council that would implement government policies over Native peoples. In the Vancouver area there are over 60,000 Natives, yet the FHFN represent only 6,000 or so members,” he says.

To date, treaty processes are taking place but little progress has been made. The Indigenous people who oppose the Olympics point out that, fi rst and foremost, the Games are taking place on stolen land. Not only that, they are worried that the Olympics will attract even more foreign investment to Vancouver and B.C.—foreign investment that is troublesome because land disputes are still unresolved. Each new dollar that fl ows in from abroad further encourages the government to continue ignoring indigenous land titles, and that investment is also usually detrimental to the natural ecosystem. Many First Nations activists are further concerned about the impact of the Olympics on Vancouver’s Downtown Eastside, where Indigenous people disproportionately live in poverty and have been hit hardest by increasing rent costs and gentrifi cation.

Hill says that he opposes the Olympics “because of the huge social and environmental impacts, including ecological destruction along the Sea-to-Sky Highway, the venues constructed in Whistler, the massive amounts of concrete used in all related construction work, the $6-billion debt, the massive police state being built, the huge increase in homelessness suffered since Vancouver won the bid in 2003, the criminalization of the poor and of anti-Olympic groups, and the erosion of civil liberties. The government also hopes to use the Olympics as a way to increase international investment in mining, oil and gas, and ski resort industries, further threatening indigenous peoples and lands.”

In a recent speech, Tewanee Joseph, executive director and CEO of the Four Host First Nations, painted anti-Olympics protesters as “non-Aboriginal naysayers … [that] want us to remain forever the Dime Store Indian.” “Do these protesters not realize they are forcing, yet again, Aboriginal people into a dreadful mould, a stereotype that takes us back to a shameful chapter in Canadian history? No. No. And no again. We fought to participate in the Games. As full partners. We fought for the jobs. We fought for respect. That is why few Aboriginal people are likely to be swayed by salvoes of warmed-over, anti-corporate rhetoric. That is yesterday’s news for the Aboriginal people of this country.”

But with opposition only likely to grow as the Olympics approaches, those “salvoes of warmed-over, anti-corporate rhetoric” look set to be tomorrow’s news, too.