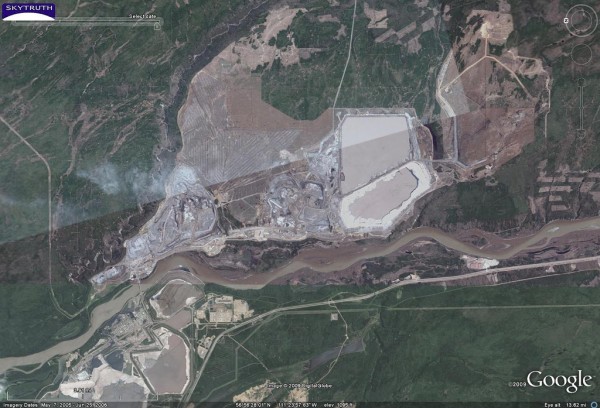 Google Earth detail showing part of the Athabasca tar sands mining operation. The tar sands is both the most carbon- and capital-intensive project on earth. Photo via Flickr user Skytruth.

Nothing brings out patriotic pride like the Olympics. But before we get busy reading about gold medals and new heights of athletic glory, let’s take a few moments to reflect on a few shameful Canadian records that you likely won’t be hearing about during any Olympic broadcasts:

1. The Alberta tar sands hold two shameful world records: Highest carbon footprint for a commercial oil project and largest capital project, says a September Greenpeace report. The organization commissioned award-winning journalist Andrew Nikiforuk to write the paper, in which he declares that the tar sands are likely to hold onto these records as production continues to expand over the next decade.

2. In 1989, the federal government promised to end Canadian child poverty by 2000. The kids that promise was made to are adults now, and one child in seven still lives in poverty. The Conference Board of Canada’s annual benchmark exercise scored us 13 out of 17 countries on child poverty; only Italy, Germany, Ireland, and the United States ranked below us.

3. Canada is the only G8 country without a national mental health strategy. Stephen Harper announced the creation of the Mental Health Commission of Canada in 2007, but so far the commission only posted a draft framework for what the strategy will look like on its website. With one in five Canadians dealing with a mental illness at least once in their lives, we hope the Commission stays on target to finish the plan by 2011.

4. We’re also the only G8 country without a national housing strategy. Though Bill C-304, an act to ensure secure, adequate, accessible, and affordable housing, passed its second reading last September, Libby Davies, the NDP member who proposed the bill, says that there is still much work to do to make it a reality. For example, educating our governing party on the importance of such a strategy: With one exception, Conservative MPs voted against the bill.