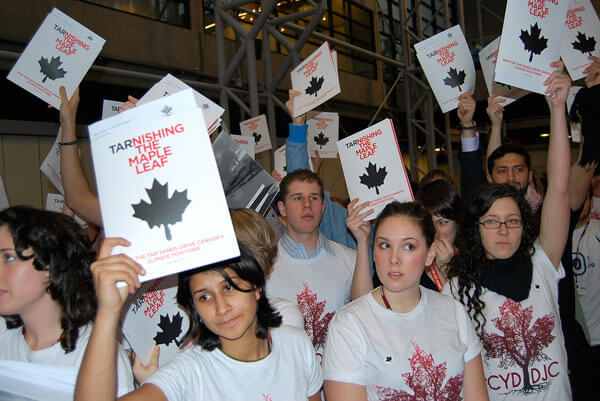 Nearing mid-December, I arise to Toronto’s first snowfall—though to my Christmasy disappointment, an unimpressive slop of wet snow and rain greeted the city’s drivers and transit riders with delays and headaches. The symptoms are similar for citizens rallying in Copenhagen this week, though for different reasons. An annual Christmas letter from relatives proved that November can now bring excellent golfing in Southern Ontario. The pudding comes from the World Meteorological Organization, that despite protestation from the deniers like those at the Munk Debate last week, the last decade will likely be the warmest one on record across the globe.

Checking in on the state of Denmark, where a recent leak of a new draft proposal has caused an international stir, I’ve asked two young veterans of international climate activism to help give us a better picture from the thick of it—their voices may or may not come through in commercial media over the next few days).

“The main point is that there’s a lack of trust now lingering over the hosting government [due to the leak],” said Zoë Caron, who is doing policy work at the negotiations with the Climate Action Network International.

“We should be able to move on just fine. We need to support the chair of the Council of Parties [the Kyoto agreement’s negotiating chair – this year being Denmark] in moving forward under the transparent UN process.”

According to Caron, everything is still on the table, with hope and opportunities abound. The world’s environment ministers will be meeting early next week.

Side negotiations seem to be occurring all over the place, and the citizen movement is reacting with urgency when they see something bubble up showing positive or negative momentum. A proposal by the South Pacific islands nation of Tuvalu for deeper cuts is being supported by other small nations and gained an immediate and loud response from activists which was posted to Youtube.

“We need to keep the message that Heads of State are coming here to work out issues, not deliver fluffy speeches, said Caron.

“France is saying they’ll reach their targets entirely domestically, which is great.”

Leaders in Europe’s youth movement are asking citizens to call their national leaders as they meet over the next two days. After watching their call for a deep cut, Canadian youth could support them by writing to ask for their leadership, by bypassing Canada’s weakness at the talks.

Another Canadian graduate of several annual Council of the Parties meetings, Aiden Abram is working as we speak in Copenhagen to mentor other youth in achieving their goals for a fair, ambitious and binding treaty. Despite the time difference, Facebook suggests that whenever you might be reading this, chances are he’s probably still working, as sleep doesn’t seem to be much of an option at the moment.

When I asked him what hope there is to be seen at the moment, Abram didn’t care for the premise.

“It’s not about hope. Hope creates helplessness – we have the ability to change this process, this system.”

There are now young people from over 100 countries participating at the conference building capacity, developing skills and connecting to each other for work that will continue well past the conference according to Abram.

“That’s what it’s about, as this process will never deliver what we need,” he said.

In asking what Canadians back home should be doing to support their work – Caron and Abram were in sync: call your MP, your Premier, your Prime Minister; write a letter to the editor; raise your voice.

“Ask Stephen Harper that he prepare sufficiently to go to Copenhagen to raise Canada’s targets and commit to making reductions domestically,” said Caron.

The Canadian word on the Danish street says that despite the headaches, progress will come with hard work. There is a lot of good noise coming from the conference: the more domestic noise and the more international pressure, the greater the likelihood that Canada could display a greater willingness to either participate productively, or at least step aside.

And if the words and history of these two Canadian climate savers prove true, nobody’s going away anytime soon. This movement is in it for the long haul, because it needs to be.

Follow folks tweeting on the conference (1,500 new tweets since I started writing this article) at http://twitter.com/#search?q=%23cop15

Follow the Canadian Youth Delegation on their blog at http://cydcopenhagen.org/