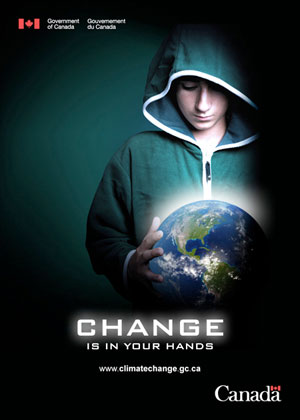 One of the postcards the Government of Canada encourages you to send to your friends.

In the best example of Catch 22 that I can think of since, well, Catch 22, it seems our prime minister, Stephen Harper, will not be attending the international climate change talks in Copenhagen in December because it is unlikely any final deal on climate change will be met—though that is partly thanks to months of his government’s own actions to obstruct the climate change discussion process.

The largest barrier to coming to an internationally recognized treaty is the increasing wedge between the developed world (Canada, the U.S., Western Europe) and developing countries with large populations (India and China), arguing over whose responsibility it is to address climate change first.

This bickering sounds more reflective of 7 year olds, not world leaders discussing the most important global subject of our time. It seems all the facts, studies and reason in the world won’t get Mr. Harper to take climate change seriously, or at least leave well enough alone and let other countries take steps forward.

But something I came across on the Government of Canada’s climate change website urging me to “take action” struck me. The website has postcards featuring children holding a globe in their hands, urging you to send to “someone you know and help foster awareness on climate change in Canada.”

Hmm. Who do I know who seems to need a nudge understanding the importance of climate change?

The emotionally based—slightly ET-influenced, for some reason—messaging on the website seems to be asking individuals to do their part, which will be important no matter what international agreements are made. But is it not odd for a government to identify an issue as extremely important for it citizens, and yet not make it a priority itself?

After all, this website also says that “Canada will participate in the United Nations Framework Convention on Climate Change conference in Copenhagen (COP15) in December 2009. The goal of this conference is to reach a new global agreement for fighting climate change.”

Last time I checked, a global agreement should be good enough reason to get yourself on a plane. We all remember that the Prime Minister skipped out on the pre-cursor discussions in New York to attend the grand opening of a Tim Horton’s. What’s next? a Dunkin’ Donuts launch?

I suggest we all take a moment to “do our part” and remind Stephen Harper about the significance of climate change and what he can do as “his part.” I understand he might rather be sitting in the comfort of 24 Sussex, listening to Ringo Starr with a double double in his hands, instead of making some tough decisions at the negotiation table that will be long-lasting and internationally binding. Who wouldn’t? But we all didn’t run for Prime Minister, and while every individual has a role to play, that still doesn’t excuse our leader for missing a globally significant climate change discussions because he doesn’t think they’re going to be effective.

So go ahead, and send our Prime Minister one of the government’s moving calls to action, better known as an e-card. You can send it to [email protected], and better yet, ask all your friends to as well. Perhaps he will have time to read them all on the plane to Copenhagen.