[Editor’s Note: Today Darcy Higgins and Rebecca McNeil start their new blog column for This, Stop Everything, on climate change and sustainability. They’ve been blogging Stop Everything independently since September, but today we’re happy to welcome them to the This Magazine family. They’ll be contributing each Tuesday and Thursday approaching the Copenhagen Climate Convention in December.] 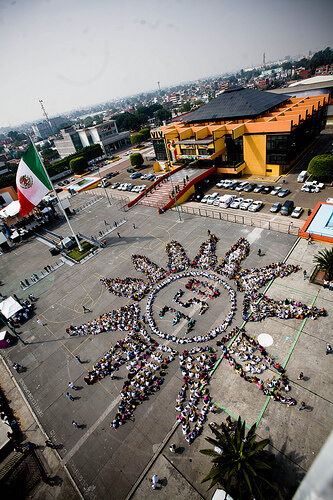 Participants in the International Day of Climate Action in Ciudad de Mexico spell out the "world's most important number."

Being responsible for “the most widespread day of political action in the planet’s history” is nothing to sneeze at. Who could have the charisma, intelligence and ability to inspire such an important global movement? Of all the names that might come to mind, perhaps Bill McKibben would not be the first, particularly if you haven’t yet been acquainted with 350.org. But it is no surprise to us, as he is the man who first captivated our attention on what he has known for two decades is one of the most serious issues of our time.

We first had the opportunity to hear McKibben speak three years ago at a breakthrough campus sustainability conference in Arizona, back when climate change was still known as global warming, and global warming was just beginning to gain widespread attention. Yet his fervent call to action remains firmly planted in our minds, and we find ourselves once again captivated by the impassioned call from this mild-mannered writer and professor.

Three years sounds like a long time, but it can go by in the blink of an eye leaving us with very little time to waste. And if we take the name of McKibben’s organization seriously, we haven’t a spare moment. 350, he says, “Is the most important number in the world.” It’s that number which scientists say is the parts per million of CO2 the atmosphere can possibly withstand before runaway climate change causes the most dire planetary and human health conditions. And what are we at right now, you might ask? A frightening 387 parts per million.

While that’s definitely past the point of safety, we may have not yet reached the point of no return. McKibben started 350.org based on the idea that we — and young people in general — desperately need to act in unison to make the drastic changes required to wake the world up to our new reality. On October 24, over 5,200 events in 181 countries echoed McKibben’s call to action, asking our national leaders to take notice as they prepare to decide how life on this planet will look in the coming years.

With two months left to define an international agreement in Copenhagen, we will be closely watching our government’s action and inaction on climate change. We will follow the youth climate movement in Canada and around the world as we try to find a reason to be optimistic about the outcome of the discussions.

But if the unassuming Mr. McKibben can prompt an underwater rally on the Great Barrier Reef, and high on the slopes of Mount Everest, inspiring Desmond Tutu to call 350 “the same kind of coalition that helped make the word ‘apartheid’ known around the world,” then he is definitely the man whose example we want to follow. After all, some things have changed in the last three years, and perhaps we have enough collective energy to turn one day of global action into ten days of effective decision-making in Copenhagen.