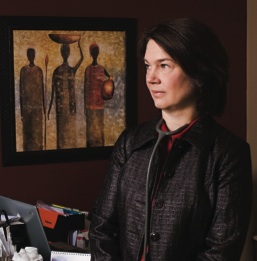 Dr. Jane Philpott, founder of the Give a Day to World AIDS campaign. Photo by Molly Crealock.

One day’s salary might not mean much to most of us, but to Dr. Jane Philpott, founder of the Give a Day to World AIDS campaign, it might be just enough to save a life.

In 2004, the Markham, Ont.-based family physician gave a presentation to her colleagues about the AIDS epidemic. Knowing that she couldn’t just talk about the plight of AIDS in Africa without giving the doctors some advice on how they could help, she suggested that those in attendance donate one day’s income to the Stephen Lewis Foundation — a Canadian organization fighting AIDS in Africa at the ground level — in honour of December 1, the annual World AIDS Day. This simple idea led to 50 doctors donating their daily salaries, an act that raised $33,000.

Since then, the 47 year-old mother of four has seen her initiative grow to include 12 hospitals, 15 law firms and dozens of other businesses, church groups and individuals, resulting in $700,000 in donations last year. This year, she’s aiming to raise $1 million for the Stephen Lewis Foundation.

Those funds will go towards providing drugs for Africans infected with HIV/AIDS, treatment that most people in Ethiopia and Niger could never afford. Residents of these countries make on average US$180 and US$260 per person per year respectively, while anti-retroviral drugs, the preferred treatment for HIV/AIDS, cost at least $2,738 US per person per year — a figure that just one day’s pay from a few Canadian professionals can easily cover.

Philpott witnessed the initial outbreak of AIDS in Africa while working there in the ‘80s. She first lived in Kenya and then after a brief return to Canada to start a family, in Niger, where she worked closely with local families whose lives were affected by HIV/AIDS and other tropical diseases.

What bonded her to those families, however, was losing her three-year-old daughter to a blood infection. While reflecting on that tragedy, Philpott points out she was in a country where 25 to 30 percent of children die before their fifth birthday. “It gave me more of a passion to say this is unjust, that the kind of healthcare expectations that those women have for their children are not the same as what mothers here expect,” she says. “I don’t think you can go back to practicing medicine in Canada and ignore those realitiesÑat least I couldn’t.”

It’s that passion for global health equality that drives Philpott and the Give a Day campaign. Although they don’t formally lobby the government to increase foreign aid, Philpott says the Give a Day campaign is a means of mobilization and a voice for the people. “How do we make ourselves heard? Money talks. How we use our money speaks volumes about what matters most to us.” She feels the Canadian government needs to rethink its foreign aid priorities when it comes to the AIDS epidemic. “We’ve set an easily attainable target of 0.7 percent of GDP as a goal and we’re not even halfway there.”

Despite claims from the Harper government that it would increase foreign aid for Africa, a UNAIDS report released in July 2008 shows Canada’s contributions in 2007 to AIDS relief was $103.7 million, whereas the Netherlands gave $380.5 million and the United Kingdom donated $984.9 million. In addition, the Canada Fund for Africa, created in 2005 by the Canadian International Development Agency, was no longer operational as of March 31, 2008.

Still, Dr. Philpott isn’t giving up. “I feel a huge challenge in terms of the urgency,” she says, “but we could beat this thing. We could really be a big part of seeing the end of AIDS in the world.”