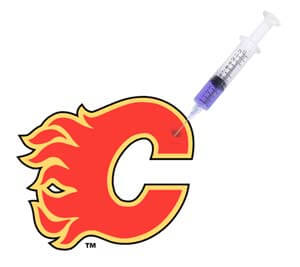 With swine flu in the air, the Calgary Flames went to the front of the line. Are they the mythical "Second Tier"?

[Editor’s note: today we introduce “Body Politic,” a new blog column about medicine and public health, written by Lyndsie Bourgon. Visit her website or follow her on Twitter. Body Politic will appear every other Thursday.]

As the Calgary Flames hit the ice this weekend they appeared to show no great superpower, which is what I was hoping would happen when they got their H1N1 shots before the rest of us.

Both the Flames and Maple Leafs made the news for stepping ahead of the pregnant, young, old and needy for flu jabs recently, and in doing so they became unwilling examples of what could happen if a two-tiered health care system were adopted in Canada — that is, if it hasn’t been already.

As flu clinics were overwhelmed and shutting down in Calgary’s Brentwood community, the Flames and 100 of their closest associates and family members lined up for the shot separately. And it’s no surprise that it’s an Alberta team that was one of the first to get caught asking for a preferential care during a global pandemic.

Alberta’s health care policy plays an important role in the debate surrounding two-tiered health care in Canada. For years Albertan politicians have argued that the “third way” of health care could be the saving grace of a backed-up, overwhelmed medical system. What better way for the privileged to get the care they need than by paying for it? And those poor people can still receive their public option, too.

Officials fired the two top health care workers related to the case, and Ontario is “investigating” how players received the shot. But it was Alberta Liberal opposition leader David Swann who hit the real issue:

While it’s true that two-tier health care could theoretically relieve some strain on the health care system by lessening wait times and work loads at public facilities, the H1N1 vaccine debacle shows what’s likely to happen when the idea is exploited in Canada — during true medical emergencies, those with enough money will trump those who are in true need of treatment that cannot (or will not), for whatever reason, jump the line.

But who can blame them? What’s wrong with this scenario is not just that the Flames or the Leafs decided to hunt out the H1N1 shots for themselves. It’s the idea that players are somehow socially exempt from waiting in line with us common folk because they can pay for something more. It’s the same treatment that skips them to the front of months-long wait lists for MRIs and reconstructive surgeries.

Hockey might be our national pastime, but our players shouldn’t be treated like superheroes when it comes to the health system.