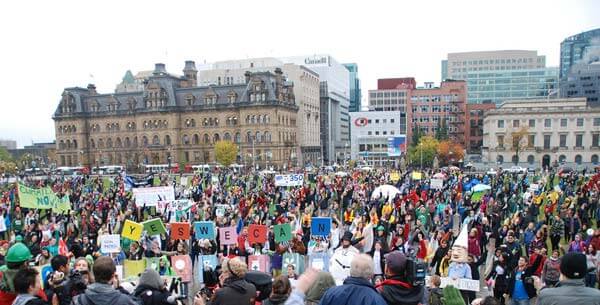 It was the largest lobbying event on climate change in Canadian history: thousands of Canadians from across the country united on Parliament Hill last Saturday as part of the 350 International Day of Climate Action to demand leadership on the issue. Yet our government will hold off on making its decision to prevent catastrophic global warming until after the Copenhagen Climate negotiations has already started.

“We’re going to Copenhagen with nothing,” said Hannah McKinnon of the Climate Action Network.

Bill C-311, the Climate Change Accountability Act, could be Canada’s most significant bill this decade. It is a private member’s bill that would ensure that Canada assumes its responsibility in preventing dangerous climate change. And instead of striking a strong position on climate change, we are sitting on the fence waiting for others to lead first. Until mid-Copenhagen where world leaders decide the next UN climate pact that will succeed the Kyoto Protocol.

But some say the bill has little chance of passing in Canada during Copenhagen. Partly this is because private members’ bills bear little weight in parliament. But more importantly it’s because Canada is not leading on the issue.  If anything, in global climate talks, we are increasingly gaining a reputation for sabotage and delay. Most recently, Canada publicly mulled the idea of scrapping the whole Kyoto-Protocol in Bangkok earlier this month and subsequently motivating the Group of 77 developing nations to walk out in protest.

“Maybe Harper should just stay home for Copenhagen. It’s not our voice he is representing. We don’t need him there.” (To be clear: while Prime Minister Harper declared he is not attending Copenhagen, representatives from his government will be there, affecting the outcome of the negotiations.)

Currently, Canada’s plan on battling climate change falls short on what basic climate science calls for and the commitments made by some of the G8 countries in Italy last July: a peak in emissions by 2020 and 50-80 per cent emissions reductions by 2050. Our plan would actually put us above 2 per cent in GHG by the year 2020 and below 38-48 per cent by 2050, when compared to the 1990 levels needed (the time in history of stable carbon in the atmosphere). And somehow Canada will do this while increasing emissions with the carbon-intensive tar sands project. Which makes us a laggard, not a leader.

Despite Canada, there are signs of climate leadership: the Obama administration has spent US$75 billion to build a clean-energy economy – that’s six times more than Canada. The European Union is joining forces to reduce the most by 2020. Even China, who has been constantly tagged as a barrier to climate progress, announced policy measures to curb emissions at the New York climate talk last September.

Beyond the political arenas, strong global mobilization is taking place in civic life demanding a different direction for our planet. Last Saturday, the 350 campaign took place as a global demonstration in 181 countries with 5,200 events to unite the world around a solution — lowering our carbon emissions to 350 parts per million (that is 1990 levels, while currently we are near 390 ppm).

“[It was] the most widespread day of environmental action in the planet’s history. People gathered to call for strong action and bold leadership on the climate crisis,” a 350 statement said.

In Canada, despite media downplaying the numbers, there were nearly 3,000 Canadians united in Ottawa for the 350 event. Bringing together a diversity of people, faith-based groups, and numerous environmental campaigns including Power Shift Canada, the largest youth gathering on climate change in Canadian history.

But while many call for action, our government hides behind our relatively well-to-do economy and geographic size as a reason for holding Canada back in the most important issue of our time.

“The Canadian approach [to battling climate change] has to reflect the diversity of the country and the sheer size of the country, and the very different economic characteristics and industrial structure across the country,” Environmental Minister Jim Prentice, told the Globe and Mail.

“I have to take a realistic view that, given the amount of work that remains to be done, we’re running out of time,” he said, arguing that their should be climate commitments later, post-Copenhagen, by national leaders.

It is true, we are running out of time, possibly because of Canada’s shameful blocking in international climate affairs. But does this mean that we need more talking?. It’s time for less talk and more strides away from “thermageddon.”

“It’s not to late to seal the deal at Copenhagen for Canada,” said Geoff Green, a speakers at Power Shift Canada, who has seen the polar ice caps melting firsthand with his expedition group Students on Ice.

The House will reconvene on Bill C-311 on December 12, seven days before Copenhagen ends. There is still time for change.