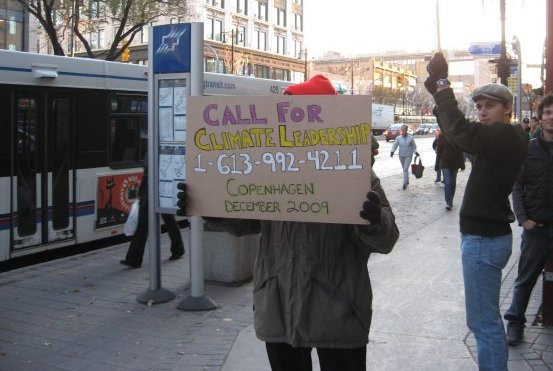 Taking "the call" literally: A protester at the International Day of Climate Action holds up a placard with the Prime Minister's phone number.

It’s now been a year since the tour. His ecoHoliness David Suzuki joined his Foundation with the Canadian Federation of Students and the Sierra Youth Coalition as he spoke to youth across the country and to George Stroumboulopoulos on The Hour, where one particular U of Guelph student was watching.  When it came to the perennial question that speakers like him always get, the “what can I do?” part, Suzuki made his answer political.

Darcy Higgins, my co-columnist here, attended Suzuki’s talk the early evening of last year’s federal election day. Suzuki echoed change-making advice he got from a former PM: if you get thousands to Parliament Hill, the politicians will have to listen: Fill The Hill.

Hearing the call, there was a lot of chatter and talk after the tour on what to do, but Gracen Johnson, a third-year International Development student, was the one to make it happen.

By the International Day of Climate Action, October 24, 2009, a few thousand showed up on a cool rainy Ottawa day to send their C-Day message.

“I do not consider myself an activist,” Johnson told us this week, “In fact, I don’t really like being called an activist.”

“This is not activism, it’s basic citizenship. Everyone shares the responsibility to hold our government accountable and live as a global citizen,” she said.

“Canada needs to pipe up about the need for mitigation, adaptation, and a green economy. The green solutions out there are inherent in our approach to tackling climate change and would be beneficial to almost all other areas of environmental integrity,” she said, adding that sustainability is the key.

So, we asked Johnson, did C-Day help to achieve this?

“In my view C-Day was a tremendous success. Will we see our government immediately pass Bill C-311 and get busy on a climate change action plan? Probably not. However, I never expected that. What I did expect and certainly experienced was the uniting of the country,” said Johnson.

On buses from as far away as Halifax and Winnipeg came people who found themselves together in a shared cause, in a way that had not yet been done. Meetings by phone and online, working groups and tireless outreach made it an effective action with little budget and no staff.

A committed group of youth is moving forward from C-Day, with a very active movement, as well as a youth delegation going to Copenhagen and a team working at home. Johnson points readers to “Climate Crew Mondays”: activist “stunts” happening weekly throughout November across Canada.  Much of the activism – or, ahem, basic citizenship — is being done as it was in the 1960s: by university students and on campuses. You can act by finding and spreading the actions on Facebook under the group It’s Time to Listen / Il Fait Écouter.  Actions have already taken place at Dalhousie, UNBC, UVic, UBC and UWInnipeg.

But what would success from all of this action look like?

“Canada needs to lead, follow, or get out of the way in the international climate negotiations,” says Johnson. “Right now, I am simply hoping that our government will stop being obstructionist at the negotiation tables. Maybe if we just get out of the way, the international community will be able to make significant progress. In my frustration, I hope they show us no mercy”.

No mercy from the international community and a strong showing from Canada’s youth. Push from inside and out are always good for change making.

Though facing a tough climb with the Harper government, citizens can never predict their success or failure. German Chancellor Angela Merkel addressed the U.S. Congress Tuesday with a speech that thanked Americans for their leadership in Europe over the last decades.  Merkel talked about the Berlin Wall that divided Europe and was torn down because of both agitation within Germany, and international pressure from without.

She now believes there are different kinds of “walls” dividing us, “walls in our minds, walls of short-sighted self-interest, walls between the present and the future,” said Merkel.  Even before the breaking of the wall in 1989, just travelling to the United States was out of reach for her — who knew that 20 years later she could speak in its Capitol Building?  Who could have predicted that the wall would come down?

So we now raise Suzuki’s bet and call: let’s find a hundred more Gracen Johnsons to make it happen.