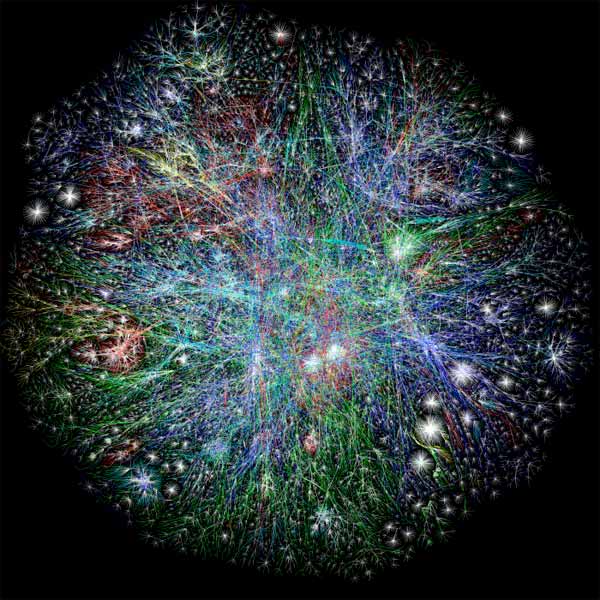 A map of internet traffic produced by the Opte Project. Licensed under Creative Commons.

For seven days in July, the Canadian Radio-television and Telecommunications Commission met in Gatineau, Quebec, to deliberate on the future of the Canadian internet. Until this summer, the CRTC took an essentially laissez-faire approach to the web: it was too new and too poorly understood to start carving out rules to govern it. But the World Wide Web turned 20 years old this year—about time to put away childish things and, in true twentysomething style, have a little identity crisis.

The CRTC commissioners slogged through plenty of arcane technical detail during the hearings, but the overarching issue was Net Neutrality: the principle that the networks we use to retrieve information treat all that information equally. When you look up a website, the phone company’s job is to deliver that website to your screen without regard to what it says, or in what format (text, audio, video). The network is neutral. In the same way, public streets are “neutral”: all cars have to follow the same rules—paying more for a Mercedes doesn’t entitle you to ignore stop signs.

On the internet, this egalitarian notion has been under sustained assault for years now by the telecommunications giants, frustrated that they haven’t yet perfected a way to bilk their internet customers to their satisfaction. Bell, Rogers, Shaw, and Telus, the cozy oligopoly that sells almost all internet access in Canada, claim they need to be able to discriminate between different types of data. All bits are not created equal, they say—text is easy to deliver, video is resource-intensive—so in order to make the network viable for everyone, they need to be able to block, throttle, or limit access for the heaviest users. Fair enough: resources aren’t infinite, so the need for some limited portion control is understandable.

But watchdog groups see a deeper problem here: Rogers, for instance, sells internet access and also owns TV stations and magazines. Why not privilege Rogers’ content on Rogers’ network? If that means slowing everyone else down a bit—say, access to This Magazine’s website will be slower—well, no hard feelings, it’s just synergy. Under such a scenario, small players will always be disadvantaged, lacking the cash and influence to pay off the network gatekeepers. And being able to block some information online implies the ability to inspect all information—a privacy nightmare.

The CRTC will reveal its findings and its next steps this fall. The technical details are complex, but the principles are simple: our lives—as friends, as consumers, as citizens—are increasingly lived online, and ensuring that our opportunities for communication are fair and equal is too important a task to leave to corporate interests for whom discrimination is more profitable. There is probably no easy solution to the net neutrality question. But there is a correct one.