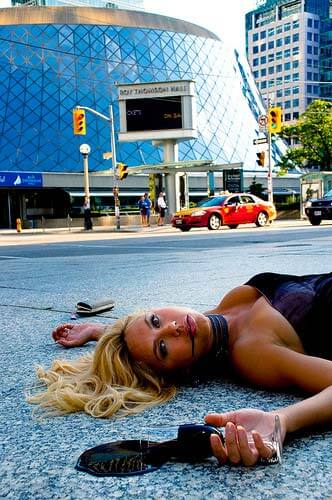 [Editor’s note: EcoChamber is back after a short break while Emily Hunter was on assignment in the Alberta Tar Sands to see the devastation first hand. Her observations will appear at This.org and in the print edition soon.]

The show must not go on. That is what activists are saying about the Toronto International Film Festival. Not for a lack of money or the worldwide attention it provides—but for its connections to environmental crimes like the tar sands.

The celebrity-filled Toronto festival closed on Saturday. But some environmentalists want it shut down for good, claiming the event is unsustainable. Protesters from EcoSanity and the Rainforest Action Network staged a “die-in” at the opening gala, pretending to die after sipping (fake) dirty oil from Champagne glasses a stone’s throw away from celebrities like George Clooney signing autographs on the red carpet.

“Celebrities have power, and with power comes responsibility,” says EcoSanity founder Glenn MacIntosh. “They need to know what they are promoting when they attend festivals like TIFF, because currently they are being irresponsible.”

George Clooney’s people say there is no association between him and his new film launched at TIFF, The Men Who Stare at Goats, and the tar sands.

MacIntosh retorts: “Appearing to have no knowledge of the second-largest sponsor of an event’s dealings with the largest industrial project on the planet is simply offensive. If celebrities like George Clooney are not aware, they need to become aware and fast—they have a moral responsibility to do so.”

EcoSanity activists claim the Royal Bank of Canada has spent $8.9 billion over the last four years on companies that operate in or develop the Canadian oil sands. The oil sands are soon to become Canadians’ single largest source of greenhouse gases. It will prevent us from meeting our future climate commitments at Copenhagen and has numerous environmental and social costs to Canada. Furthering the tar sands signals a fossil fuel business-as-usual mandate instead of a switch to a renewable and sustainable path in the 21st century.

There have been numerous protests across Canada this summer against the RBC getting in bed, with what many call, the greatest eco-crime on earth. Such protests include RAN activist, Eriel Deranger, scaling a pole last July at the RBC’s headquarters to drop a banner that would embarrass the bank.

Deranger says: “The RBC is the ATM to the tar sands. This needs to be stopped, we need to hold our banks accountable.”

But never before had this message been taken to the Toronto film fest until the “die-in” protest at the George Clooney gala. While some onlookers called the stunt “out of place” at the festival, MacIntosh says the protest served a purpose. For him, a former assistant director in the Toronto film industry, he believes festivals like TIFF are the root problem to many wrongs in our society and need to be stopped.

“TIFF represents an imbalance of power, the inequality in the world, our reverence and investment in all the wrong things financially and morally.” He also says that TIFF has no environmental policy, promotes a culture of excess and uses thousands of SUV’s, limos and private jets to truck in the film industry top dogs from around the world. “This is not an environmentally sound festival.”

In an age of climate change where we are supposed to be reducing our polluting ways and moving towards a path of sustainability—do festivals like TIFF really have a place with us any longer? All in name of watching a few more movies and gawking at a few more people—is it really worth the oil it uses?