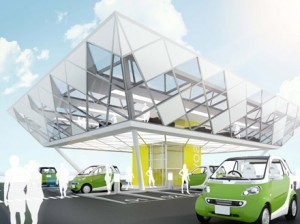 A charging station concept by Better Place, a private company attempting to develop a business model for electric cars.

We’re not getting the job done with the Harper government, so where do we go next? Rebecca’s option of industry leadership in last week’s column may have raised some eyebrows for those of us working on policy like pricing carbon or regulation to get industries to do the right thing. And also for those who see industry as the bad guy—not an unreasonable view—since big companies produce an unreasonable amount of total greenhouse gases.

The truth is that companies need drivers to reduce pollution. One of those can be internal, through a corporate leader who gets it, who has started a company that meets her own values, or one who has seen the light, like Interface head Ray Anderson after reading The Ecology of Commerce.

These cases, however, are the exception. While you might see some big oil companies appear to be getting ahead of government by requesting a carbon tax, the next thing you read, the same company’s dealings with pollution and people in Nigeria or Alberta raise questions of ecological commitment.

On the other hand, some companies have made the commitment to green all the way. The clean technology sector is growing on the Toronto Stock Exchange. An area of growth, this sector has nowhere to go but up.

Corporate sustainability specialist Bob Willard has long talked to sustainability change agents about the kinds of factors that influence companies to move—and many do exist. From NGOs putting on the pressure to insurance companies more than peeking into the concept of climate change, big companies have been nudged for quite a few years now.

So how do citizens shift the economy to what we want—drastically reduced carbon, in the least?

Green companies need support. Governments may be more willing to support incentives to help clean companies and reduce subsidies to grey ones, than explicitly regulating or taxing pollution. One area of potential policy pressure.

But as citizens and potential consumers and investors, we can do more to support and expand those companies doing the right thing. And of course as people show choices with their pocketbook, they must doubly make that choice at the ballot box. Those without the privilege of financial resources (like NGOs) can support companies leading the green economy in other ways.

On the flip side is punishing the bad guys—making them change or lose profit share if they don’t.

Large industries, and increasingly financial institutions, have been the target of boycotts and campaigns to change their practices. These campaigns can work if being given support from all organizations that need work on climate causes. Campaigns should be given focus. One effective lobby targeting divestment from a tar sands company, with presence at shareholder meetings, newspaper ads and calls from prominent Canadians could get other companies looking at what they need to change.

Good neighbour campaigns take a more positive spin, through tactics like community letter writing to companies that should be doing better. These can be effective because of the personal tone, recognizing CEOs as people too, and putting social pressure through community ties.

Industry’s time to pollute needs to be up. With some more clever pressure from the people, things could shift from the bottom up.