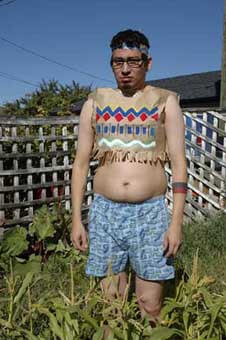 In a small bright room in downtown Toronto, a young Aboriginal woman is auditioning for a role she never expected to play. “I’d like to read the part of Billy Jack,” she says. With script in hand, the woman narrows her eyes and begins to read: “It’s my medicine bag. Got some owls feathers, sacred corn, snake teeth …” Behind the camera, looking every bit the director in jeans, baggy T-shirt, and ponytail, sits Terrance Houle — filmmaker, photographer, performance artist, and all-around funny guy. Though he’s only been creating films and art for five or six years, Houle is making waves with his humorous post-modern take on the unique issues facing contemporary Aboriginal Canadians.

On the “set” of Casting Call, his most ambitious project to date, Houle is relaxed and in charge, guiding nervous volunteers through their lines. The piece — part performance art, part film — confronts the stereotype of the “Hollywood Indian” by holding fake auditions for the roles of “Natives playing non-Natives acting in Native roles.” Anyone can audition, and each participant chooses from a selection of scripts from old Hollywood films that originally used Caucasian actors to play Aboriginal characters. “Everybody who auditions pretty much gets in,” Houle explains between readings. For Houle and the participants, it’s about “Natives taking back the roles themselves.”

Houle’s cheeky critique covertly drives his message home, but even when the subject matter is potentially sensitive, he can’t resist a joke. The piece has been staged at festivals and events across Canada, and each time it’s performed Houle posts an ad to attract participants that lists possible qualifications: “Traditional, contemporary, bannock experience; an interest in bingo; braided hair; owners of buckskin loincloth, breach cloth and general hides a bonus.” This playful mocking is Houle’s signature as an artist, an approach he uses intentionally to make his art accessible to a wider audience. “I don’t want to be somebody who’s pointing a finger,” he explains. “I find that, for me, that doesn’t work.”

Evidence of this approach can be observed in his 2005 short film, Metrosexual Indian, in which Houle addresses the conflicting identities that confront males of his generation. Dressed in full 1950s Hollywood-Indian-style regalia overtop metro duds, Houle and his buddies brave the streets armed with cellphones and no-foam cappuccinos. In another piece, Terrance, adorned in (only) a loincloth and moccasins, portages a canoe from public fountain to public fountain in downtown Vancouver. The point is clear: it is near-impossible for Aboriginals to negotiate a meaningful relationship with nature in a world of glass and concrete.

And his work isn’t just getting laughs — it’s getting attention. In 2006 he won Calgary’s Enbridge Emerging Artist Award, and last year he was nominated for the Sobey Award, Canada’s most prestigious award for young artists. While most reactions have been positive, there are still some who find his work confusing. Houle laughs as he explains, “for this piece especially, I’ve had a lot of people email saying, ‘This is racist tripe! Artists should know more about Aboriginal people!'” He chuckles at the irony. “For me I find that funny, that I have to email and say, ‘well, in fact I am Native, and I’m very well versed, and these are actually culled from my experience as an Aboriginal person.'”

In the audition room, though, the mood is jovial. One woman shows up laden with props, wearing a dress with braids sewn on the front; another does a “valley girl” impression. A man reads the entire script with a campy, effeminate affectation. Everyone seems to know the films, and most burst into laughter as soon as they finish reading, along with Houle. “I know all these movies. Everyone kind of associates themselves with them. I loved Billy Jack,” Houle says of the 1971 cult classic. “I was like, ‘A kung-fu Indian! How cool is that!’ And then I found out that he wasn’t Indian and I was like, ‘Oh.'” Casting Call serves to right that Hollywood wrong, and is getting Aboriginals and non-Aboriginals alike laughing-and thinking. No easy trick, but one that Houle has mastered.