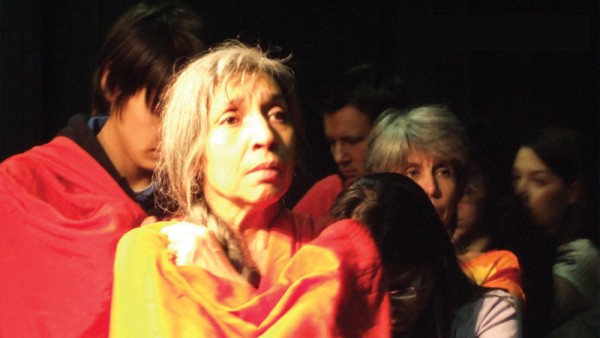 I joined the board of Native Earth Performing Arts, in Toronto’s Distillery District, several years ago, and quickly discovered the best perk of the office is watching a performance evolve through rehearsal. Seeing the actors figuring out their moves together, adjusting dialogue, and dissecting the meaning of the play, and then witnessing opening night when they fire the creation into life…is magic. No better word for it.

A case in point was the evolution of Death of a Chief, NEPA’s adaptation of Shakespeare’s Julius Caesar, in which Rome becomes “Rome, Ontario,” swords are exchanged for rocks, gender is reversed (Kuna-Rappahannock playwright Monique Mojica playing Caesar, and Cree actor Lorne Cardinal her husband Calpurnius), and soothsayers speak Ojibway. Death was seemingly a departure for Native Earth, whose whole purpose is to develop contemporary work by Aboriginal artists. But clearly this was not a bid to update Shakespeare, much less to do the play in “Indian dress.” And it was a great deal more than an adaptation. Besides the title and sex change, words were altered and scenes moved, all of it the result of a lengthy and deeply collaborative process spanning five years and including more than 30 artists guided by NEPA’s outgoing artistic director, Algonquin playwright Yvette Nolan. Rehearsals included study sessions where tables, chairs, and books were hauled out, and everyone delved into the script. The point of departure—the place where Western and indigenous could meet—was found in Brutus’s line “Th’abuse of greatness is when it disjoins / Remorse from power.” Like Emperor, like Chief, you could say. Chief gets elected, gets arrogant, gets ousted. It’s hard to think of a traditional story with more currency today, given events in North Africa. But it’s also an astonishing vehicle for taking on Band politics.

The play’s brilliance is in using the Western canon to talk about the corruption of power on reserves, thereby insinuating a non-Native side to the story. The great gift of Native theatre is this uncommon view of our shared history, very hard to come by otherwise. Its eternal challenge is communicating the Aboriginal world view to non-Aboriginal audiences. And I use the term “theatre” loosely, for the concept of drama is multidisciplinary and comes with dance and song, at times lacking dialogue. The job requires reconciling Western conventions with indigenous tradition, which, for example, communicates through gesture, rhythm, and silence, and eschews central characters. Always it forces the question: How far to go to fit into an alien art form?

The artists I came to know through Native Earth are multi-talented and constantly multi-tasking: bridging cultures, crossing genres, translating custom, melding perspectives. The work is, by definition, a continuous negotiation between cultures—among cultures, actually, for these creators are themselves a diverse lot, part of an urban community of Aboriginal artists who come from all over the Americas. I was also struck by how many are young.

“It’s amazing how slowly and how quickly things change,” Nolan says. “It feels like we have been struggling forever to have our stories heard, and nothing ever changes. Then I look around me, and I see the battalion of new, committed young artists.” Nolan’s successor is Ntlaka’pamux (or Thompson River Salish) playwright Tara Beagan, who is in her 30s, has written over 15 plays and has numerous collaborations under her belt.

Native Earth is Turtle Island’s eldest indigenous theatre company, has been around for 28 seasons, built up a repertoire, established an annual workshop for new work called Weesageechak, and pioneered a highly successful made-to-order program providing short plays and skits on designated topics. When West Hill Collegiate Institute in Toronto was debating the fate of its sports team name (the Warriors) and its feathered stereotype of a logo, it commissioned a piece from the theatre. Four actors were sent in for a day of performances and Q&As that both focused and heated up debate. The result was positive: the logo went. It is this kind of interchange I think of when considering the disaster that is Caledonia, and the chasm of ignorance that still exists between Native and non-Native Canada. So few places exist where any of us can hear Aboriginal voices live and unmediated; it seems strange to me Dalton McGuinty hasn’t called in Native Earth.

Next year the company will move into its own performance space at the Regent Park Arts and Cultural Centre. When that happens, Toronto will become the only major city in the country with a dedicated, Native-run centre for Aboriginal culture.

Susan Crean Then: This Magazine editorial board member and contributor, 1980–1990. Now: Board member of Native Earth Performing Arts until 2010. Currently working on a book about Toronto. Visit her website at whatistoronto.ca.
Share Tweet Email Print