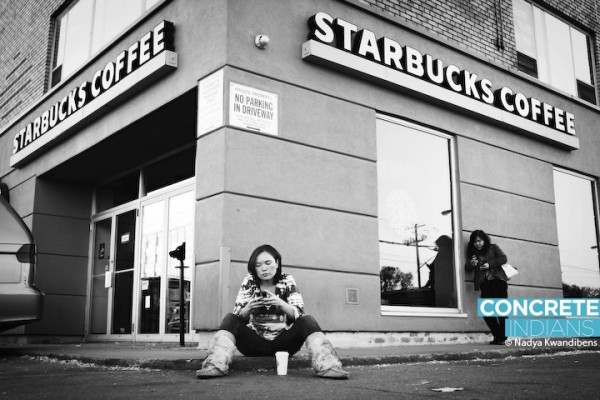 Portrait of Jennifer Podemski, one in a series in Nadya Kwandibens "Concrete Indians" project. Image courtesy the artist. 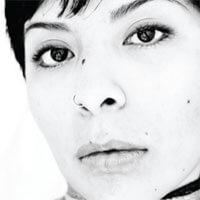 Nadya Kwandibens stepped off a Greyhound bus from Phoenix, Arizona, in Kenora, Ontario, in November 2006 with only her camera and her computer. During the two-and-a-half-day trip, her suitcase, containing all her belongings, had been misplaced at a transfer point in Omaha. She lost her clothing, her native powwow jingle dress, and sacred ceremonial items, like her smudge bowl and an eagle feather her aunt gave her.

“I was broke, tired, hungry, happy, angry, frustrated, and nearly crying,” she says. “I was standing there by the bus wearing only the clothes on my back.” Luckily, her camera and her computer were all she needed to propel her from that Kenora bus stop to a burgeoning career as an acclaimed photographer and a leading light among emerging First Nations artists.

Kwandibens, 30, is of Ojibwe and French heritage. She had moved to Arizona in 2005 to pursue a relationship with Native American photographer David Bernie, and that was when she first picked up a camera. Only one of those love affairs—with photography—survived. Feeling emotionally stuck in Arizona, she began to use the camera for healing: she took pictures during the day and taught herself new photography skills online at night.

This impulse to heal through art recalled the jingle-dress dancing Kwandibens had done as a teen growing up in foster care. Her biological family, with whom she had limited contact, had encouraged her to keep up the traditional Ojibwe dance; it was one of her only connections to her native culture while in foster homes, feeling isolated and lonely.

Feeling the same way again in Arizona, and unable to find work, she began contacting Indigenous people in the area, asking if she could take their portraits. Sharing those photos on MySpace, Facebook, and Flickr introduced a large new audience to Kwandibens’ photography, and helped build an online community of First Nations artists and supporters. 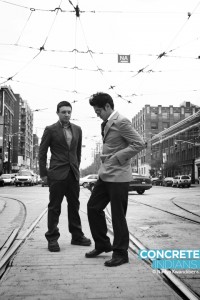 Portrait of Waawaate Fobister and TJ Henhawk, one in a series from Nadya Kwandibens' "Concrete Indians". Image courtesy the artist. Click to enlarge.

Back in Canada, Kwandibens turned her camera on this community with her Concrete Indians project, a series of portraits of the urban Indian experience. She asks her subjects, “Who are you as a Native person within the city?” The resulting photos are witty, meticulous, poignant. The second subject in the Concrete Indians series was Jennifer Podemski, a series regular on Degrassi High and Rabbit Fall. Podemski chose to wear her mukluks while texting on her BlackBerry in front of a Starbucks. It was this presentation of Native people in a modern, urban context that caught the eye of Ryan Rice, cofounder of Aboriginal Curatorial Collective, who was curating an installation called HOW: Engagements of the Hollywood Indian last year. Kwandibens was chosen as one of five featured visual artists in that show. “She captures an Indigenous spirit,” Rice wrote in the show’s catalogue, “and resuscitates characters overshadowed by the burden of false impression.”

“We all have something good to contribute,” Kwandibens says. “By sharing and being so giving with the Concrete Indians series, people really started to connect and find something they can relate to in the images. They are able to see these beautiful brown faces all over North America. We are all so connected.”