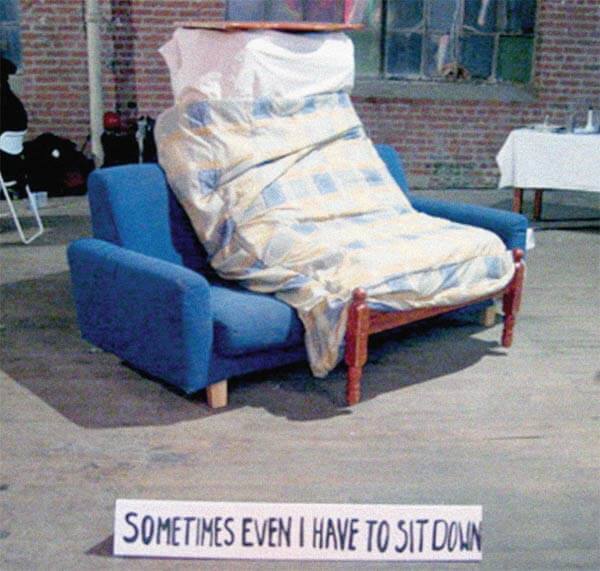 "Sitting Bed" (2006) by Life of a Craphead. Photo courtesy the artists. 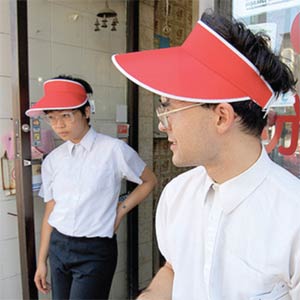 Amy Lam, left, and Jon McCurley, the "conceptual comedy" duo known as Life of a Craphead.

For Toronto’s “Making Room” art show in 2006, Amy Lam and Jon McCurley—the duo who call themselves Life of a Craphead— erected a bed sitting on a couch. The couch was large and blue and the bed sat as a human would, folded at the waist, with two wooden legs on the ground. It looked comfortable. On a sign nearby, hand-written, as if the bed itself got down on bedposts and springboard to scrawl the words, was the caption “SOMETIMES EVEN I HAVE TO SIT DOWN.”

“It’s supposed to be funny,” Lam says of their work. McCurley nods. “But the first couple of shows, people just didn’t laugh.”

Today, Lam and McCurley are one of Toronto’s most sought-after installation-, performance-, and conceptual-art teams. They have appeared everywhere from rock clubs to abandoned factories, hoity-toity galleries to Hollywood’s Upright Citizens Brigade Theatre. In Toronto’s Chinatown, Life of a Craphead offered a “Free Lunch,” giving away everything on the menu; in Montreal they sat in a church basement, selling $40 “laughter-treated” wood.

They met at Canzine in 2004, each there with their own projects. The following year, the duo performed their first comedy set together for the Drake Hotel’s Joke Club night. As they chow down on eggplant curry, their chemistry is palpable: conversing in gentle punchlines, a string of sympathetic giggles, and each peeping through enormous granny glasses.

Whereas Lam has lived in Hong Kong, Calgary, Waterloo, and Montreal, McCurley has known only Ontario, growing up in Mississauga before spending a “year of hell” at Queen’s and then OCAD. Life of a Craphead’s first joke involved boxes of books taken from the house of McCurley’s parents, who had recently moved. “We pulled [them] out on stage and then we went offstage and played Beethoven,” McCurley says. “And nobody laughed. After that we brought out a dog on a cinderblock and we let him loose, with Beethoven. And nobody laughed.”

“And that was the first joke ever,” Lam sadly intones. In their earliest routines, they avoided addressing the audience directly—trying “not to do the things that stand-up comedians usually do.” But as they began to do more “fine” art events, the context changed. “The popular notion of performance art is ‘It could be anything! There are no limits,’” Lam says.

“Comedy’s expectations are different and much more clear,” McCurley continues. “You’re going to go in and you’re going to laugh at these jokes.” 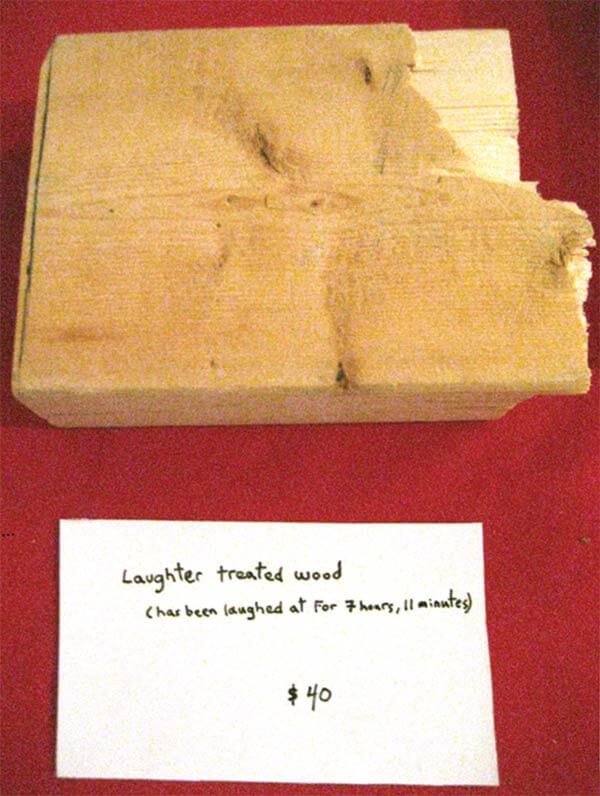 Life of a Craphead’s work began to test the relationship between performance art and comedy, artworks and jokes, often while occupying or reshaping public spaces. In 2007, the pair illegally sawed “musical lines” into Yonge Street—trenches that would play “music,” or rather a brief coughing sound, when cars drove over. More recently, they crashed their own gallery show— engineering a fake wedding party that seemed to sabotage a play at its climax. “Wise art people, who have a handle on things, were tricked,” McCurley gloats. “They asked, ‘How did they do that? Why did they do that?’”

But it’s the arbitrary, self-organized events that most tickle Life of a Craphead: their show at an abandoned truck factory; their proposed “stress ramp” for frustrated Torontonians to jump into Lake Ontario; taking a saw to the road outside Future Shop. “It’s more important to do something with people here than to impress people who don’t exist over there,” McCurley says. “If it gets busted by the police, then no one cares. ‘Oh well! Everyone goes home!’ But if it works, it’s like—‘I can’t believe it’s happening! This is amazing!’ Then it’s like heaven. Nothing else matters. This here is the best place to be.”