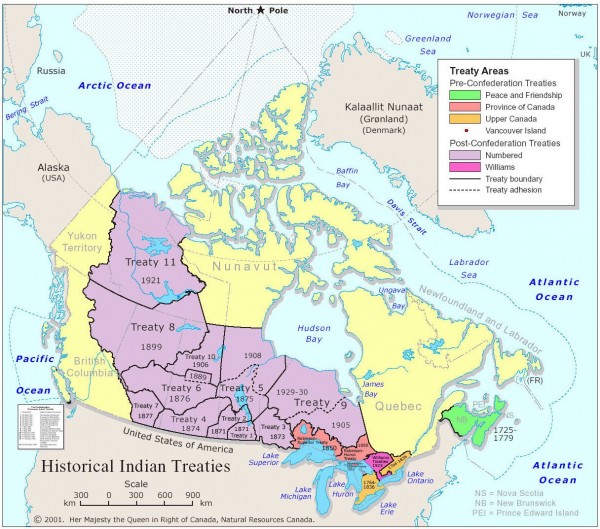 The Royal Proclamation of 1763 included a clause prohibiting British colonists from purchasing “Lands of the Indians,” so as not to commit more of the “Frauds and Abuses” that characterized colonial takeovers of Aboriginal territory. To my reading, this measure was intended to make clear to the English colonists that Aboriginal Peoples enjoyed equal status. As we know, that’s not quite how it worked out.

In 1987, after the premiers met at Meech Lake and agreed to open the Constitution, I proposed to several prominent people involved in the process that the easiest way to respect that commitment, and to lessen the offence of their putting Quebec before Aboriginals, would be to create an 11th province out of the remaining Aboriginal and territorial lands. Twenty-two years later, First Nations are still fighting to get even a modicum of self-government.

But the election of the Progressive Conservative party under Brian Mulroney in Ottawa, and the defeat of the separatist Parti Québécois in Quebec at the hands of the Liberals under Robert Bourassa, suddenly moved the now infamous “Quebec round” ahead of Aboriginal people. While the constitutional requirement of first ministers’ meetings with Aboriginal leaders to amend the Constitution was met, it seems with hindsight that these meetings were simply pro forma, as Bourassa and Mulroney already had plans for the Meech Lake Constitutional Accord.

A year later, the Mulroney government appointed a Royal Commission on Aboriginal Peoples. Among its recommendations were a list of powers that Aboriginal nations needed to protect their language, religion, culture, and heritage.

The underlying concepts are similar to the powers that the Fathers of Confederation from Lower Canada had identified as necessary for the preservation of the francophone language, religion, culture, and heritage. Letting provincial governments have the powers necessary to protect language, culture, and religion, was the key to Confederation and then the innovation of federalism was chosen for the new Dominion of Canada. Even though Canada was based on this idea of division of powers to allow for regional cultural autonomy, the federal and provincial governments have rejected similar devolution of powers to Aboriginal communities or provincehood for the Northern territories. The federal and provincial governments claim the population is too few and too dispersed to manage all these powers. And, of course, small provinces and Quebec do not want to start adding multiple provinces, beginning with three in the North, as their own relative influence would diminish.

But what about one province for all Aboriginal Peoples?

Aboriginal lands, including the three Northern territories, are legally held in reserve on behalf of Aboriginal Peoples. The federal government acts as trustee over the land, and this creates a rather distasteful paternalistic dimension to Aboriginal–Non-Aboriginal relations. What if our government simply takes all this land held in reserve and returns it to Aboriginals? Make all that land the 11th province of Canada.

The structure of government for this new province is unimportant and frankly not the business of the people who don’t live on this land. The constitutional change would be simpler than one would imagine. It would not require the unanimous consent of the provinces. According to the Constitution Act, 1982, the agreement of only seven provinces, representing the majority of the population, is needed for the federal parliament to create a new province. But it also states that this is “notwithstanding any other law or practice,” and for the federal parliament to take all remaining Aboriginal land and designate it the “final” province, given constitutionally entrenched treaty rights and federal jurisdiction over “Indians, and land reserved for Indians,” it may even be possible to do part of the change without provincial consent.

For those concerned about corruption within band councils, their own provincial government would regulate these matters and being concerned about how monies transferred to the local governments are handled, it would undoubtedly do so more effectively than the federal government, and without the racism or paternalistic interference. Equalization payments to the province would replace the now direct transfer to Aboriginals and their band councils, thus eliminating the demoralizing stigma of dependency. What is more, some of the Aboriginal land held in reserve is resource-rich, providing an independent source of revenue.

Critics of nationalism most strongly reject the idea of a province based on ethnicity. But based on its territory and its land base, the new 11th Province would not be exclusively Aboriginal. Many non-Aboriginals live on these lands and within the broader Aboriginal grouping there are First Nations, Inuit, and Métis, subdivided by hundreds of individual Aboriginal nations. This would be a civic nation like Quebec, and a province like any other, though the provincial leadership will likely be Aboriginal.

This largely Aboriginal province will be bigger in territory, richer in resources, and competitive in population size to the average Canadian province. It can negotiate with the more influential provinces, where many of its off-reserve citizens live or work, namely Alberta, B.C., Quebec, and Ontario. And, like the other civic nation of Quebec, its premier, by virtue of representing a cultural group that is in the minority across Canada, would have a powerful voice at the table of first ministers.

With provincehood would come an increase in Aboriginal members in the Senate and House of Commons. Aboriginal Peoples would finally be truly engaged in Canada’s political process—and this is essential for full citizenship and equality.