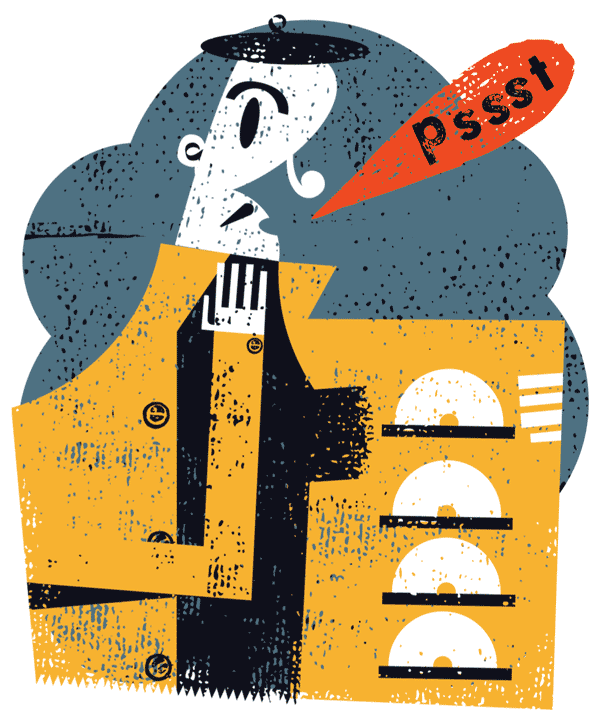 In some corners of the web, piracy is a form of curation. Illustration by Matt Daley.

In the summer of 1999, a terrifying rumour began circulating on the then-young internet, gluing millions to their screens: Napster, the illegal music service, was about to be shut down. It seemed like the party with an endless soundtrack was coming to an end.

But though the greedy rush to download anything and everything remains, a new and surprisingly widespread breed of piracy has been quietly simmering in the corners of the internet. Rather than encouraging users to grab as much pop culture as they can, these sites are about quality, not quantity. Instead of an anarchic free-for-all, they’re more like a curated exchange amongst aficionados. By most definitions, it’s still stealing, but stealing with a “Robin Hood” twist: the ultimate goal is to spread good art and challenging ideas—for free. That may be controversial, but as principles go, it’s a pretty noble one.

Today, the most common way to download copyrighted material might be a site called The Pirate Bay. It’s just one of the sites that index content scattered across the internet rather than housing it, making them harder to shut down. Every day, millions of films, songs and books are downloaded; unsurprisingly, the most commercially successful entertainment is also the most pirated. A perhaps unintended consequence of the entertainment industry’s hype for the new and popular is that it also drives those who steal from it.

But another approach to piracy has been evolving, too. Rather than an all-you-can-eat buffet, these sites are more akin to an underground dinner club for foodies. Instead of an array of popular, everyday items, one is presented with the crème de la crème of culture, whether a pristine copy of a Fellini film or that Ella Fitzgerald recording few have ever heard.

It was perhaps a music community named OiNK.cd that was the most prominent of these more rigorous sites. This go-to place for quality tunes was shut down by a legal challenge in 2007, though the site’s owner was recently cleared of charges. Nonetheless, What.cd and Waffles.fm (which, for visitors to its homepage, pretends to be a site about recipes), quickly took the place of OiNK. cd. In function, these sites work much like The Pirate Bay. In philosophy, they differ significantly. Many users take time to find and upload obscure tracks of smart, Scandinavian electronica rather than something by Beyoncé. Discussion on the sites’ forums often reflects this commitment to hidden gems, and those who share obscure or difficult works often gain credibility. Instead of mirroring the behaviour of the populist industries they seek to undercut, the sites are unapologetically elitist.

But to characterize these sites as a paradise for thieves with highbrow tastes would be to miss part of the picture. The original material might have been pirated, but these sites make members share amongst themselves. Ratios of uploads to downloads are enforced. Download every available bit of Spanish jazz without sharing in kind and you will be ruthlessly and quickly ejected. What’s more, rather than the populist grab-whatyou-can ethos of The Pirate Bay, you have a community of invested, informed people to guide your wanderings, introducing you to the innovative and new as you return the favour with your own obscure treasures.

Nor is this phenomenon limited to movies and music. AAAARG.org, a site that stores hundreds of academic articles, has electrified cultural theory geeks by finally putting some of that anti-establishment Marxist thinking into practice. When an academic publisher recently requested an article be taken down, it was met with angry and erudite responses about “the exploitative forces of capital.” To the publisher, a copyrighted work was being distributed without compensation; to the sites’ users, ideas were being shared for the greater good.

From the start, we knew the web was going to change things. What we possibly didn’t realize was, unbeknownst to many, new modes of cultural exchange were being born that replaced blind consumption with careful curation, often by simply removing the costly barriers erected around “the good stuff.” As a result, those who adhere to the letter of the law, and the spirit of copyright and ownership that underpin it, believe these sites are simply dens of theft.

But such a view is short-sighted. What these services let us see is that when the exchange of ideas, rather than the exchange of dollars, is the controlling principle, communities will form around the best and most challenging of what culture has to offer. Call me a naive idealist, but I think that’s a good thing. And when history looks back on this moment, rather than maintain the status quo, I’d rather it be known I was in Robin Hood’s band of merry thieves.