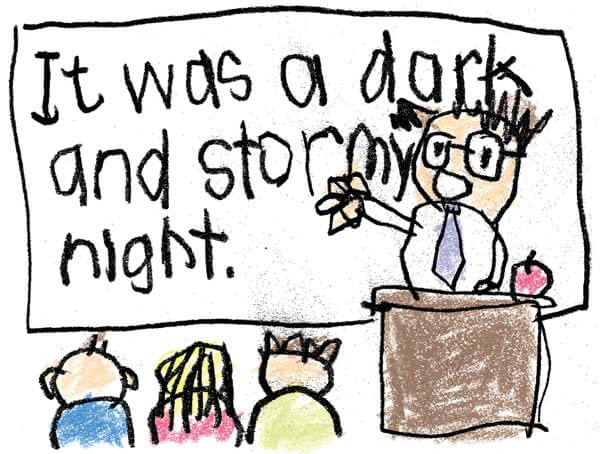 Can creative writing be taught? It's complicated. Illustration by Dave Donald.

While a degree in creative writing may not top your career counsellor’s advice for a quick professional turnaround, the formal study of writing was a North American growth industry even before the recession sent more people back to school (or kept them there longer). In an anguished and incredulous Harper’s article, American writer and professor Lyn Freed accurately describes creative writing programs as “the cash cow of the humanities.” Four new Canadian graduate writing programs have been launched in the past six years, and the number of creative writing MFA programs in Canada tripled during the same time.

The contemporary writing workshop is the antithesis of the isolated writer scribbling away in her garret between binges. Instead of steeping pages in nicotine, opium, and self-confidence, the contemporary writing student submits her work to regular peer critique and the mentorship of a writing prof. At the graduate level, she’ll sweat out a creative thesis. Several contemporary Canadian books, including Nino Ricci’s Governor General’s Award-winning The Lives of the Saints and Charlotte Gill’s superb Ladykiller, started out in writing workshops.

Studying writing is increasingly popular, but will it make you a writer? In his polemical book of essays, True and False, playwright and filmmaker David Mamet addresses the analogous situation of actors earning MFAs. Mamet argues that degrees in the creative arts produce graduates who are (1) obedient and (2) skilled at surviving in a bureaucracy. Not, I agree, core skills for an artist. When writing becomes a question of credentials before creativity, are we still going to get what William Faulkner calls “the human heart in conflict with itself” or simply the GPA in conflict with itself?

Schoolifying the arts isn’t always for the best. New Yorker art critic Adam Gopnik describes the major shift in modern art as the replacement of “Beauty Per Se (Bellini’s ‘Norma’)” with “Ugly with an Explanation (Andy and Duchamp and so on).” In print and in galleries, we’ve all met work that is the equivalent not of the funny joke, but of the joke explained; not the kiss, but the disquisition on a kiss. Schools don’t exist without bureaucrats, so schools are almost always more likely to prefer explanations to beauty.

All true, but where else are you going to learn to write today? Writing degrees may not be perfect, but decent ones offer several advantages. For a start, most artists are going to earn a university degree anyway, so why not devote part of it to the experiential learning and high peer stimulation of small writing workshops instead of one more lecture class for you and 500 keen, paying minds? If you slog on to a graduate degree, you stand a good chance of getting scholarships. Recent biographies of Mordecai Richler portray a young writer so impecunious he got scurvy from malnutrition and once sold clothes for food, but also someone who received cheques from family. During my creative writing MA, I was able to pay rent and buy groceries by reading and writing. Ever since, I’ve put the touch on my keyboard, not my family.

Changing trends in North American editing are also a good argument for enduring a few forms and regulations for your (early) writing. Scribner’s legendary Maxwell Perkins cut and polished the raw minerals of Ernest Hemingway and F. Scott Fitzgerald into polished gems, regularly cutting hundreds of pages. But today’s press-print editors, those marketeers, all know that these are legends from the past. The anthology Editors on Editing carries an essay by Gerald Howard entitled “Mistah Perkins: He Dead.”

The holiday dinner table provides another reason to consider a writing degree. It’s difficult to impossible for our friends and family to fairly read our unfinished manuscripts as finished books. Members of a writing workshop become comfortable enough to start exchanging valuable criticism without becoming so chummy that the room is full of cheerleaders but has no coaches.

In his hilarious campus novel The Good Body, Canadian writer and writing professor Bill Gaston combines, of all things, writing programs and hockey. Ultimately, his protagonist asks whether art works on (and for) the head or the heart. Good writing will always come from both, and a writing program can, however briefly, provide you a place to lay your head.