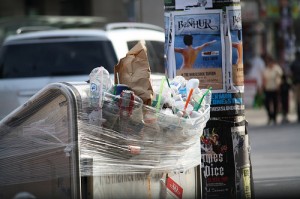 From Flickr. As the original caption points out, Torontonians will apparently do anything to avoid actually littering.

I grew up in Saskatchewan, so I’m not accustomed to being on the receiving end of the country’s resentment of Toronto. For this reason, I never thought I’d publicly acknowledge, let alone write about, problems created by the ongoing garbage workers’ strike. But the strike did get me thinking about new work applying “social proof” theory – the glaringly obvious insight that people are influenced by the behaviour of those around them – to waste reduction. Or if you prefer, let’s call it “name and shame environmentalism.”

The phenomenon gets coverage, amongst other places, in this month’s Atlantic. A firm called Positive Energy did a test project in Sacramento in which they sent people power bills with either lots of smiley faces (“you used 58 percent less electricity than your neighbor this month”) … or none (“you used 39 percent more electricity and it cost you $741 more”). This led to a 2 percent reduction in energy usage in the neighborhood, or the equivalent of 700 fewer homes on the grid, according to the Atlantic. That’s a huge reduction for something with few costs and no real drawbacks.

I read the Atlantic article while sitting on the patio of a Starbucks at Bathurst and Bloor on an oppressively hot Toronto evening. Despite the strike, the store had whisked away its trash and worked some of its Starbucks magic to ensure those piles of discarded coffee cups were never seen by its guilt-prone, environment-conscious clientele. In contrast, the public garbage bin outside the store provided stark proof of just how much garbage our city produces. Someone had pried open the taped-up receptacles, but still the bin was full and garbage had spilled onto the street.

Faced with the prospect of littering in front of a patio of onlookers, most people instead shamefacedly tucked their newspapers or water bottles under their arms and kept on walking. Of course, I have no illusions that not throwing that particular piece of garbage into that particular bin made any difference. But I also suspect that the person who carries his trash around for 20 minutes before finding a discreet corner in which to throw it will think twice before buying the next newspaper or water bottle. It’s a rare welcome consequence of the strike that there are no more magical city employees to make our garbage disappear, forcing us to grapple in a very public way with the mess we create.

The problem I have with this new application of social proof theory is the same problem I have with writing blog posts about the environment. It feels a lot like nagging. And no one likes being nagged – especially on an issue like waste production, on which we are all far from perfect. However, at it’s best, the idea is not about creating more shame and self-loathing about the environment, but about turning that shame into something productive. It’s about taking the same competitive instinct that makes us mow our lawns or get our kids haircuts and using it to help our world.

This morning when I realized my garbage can was getting full, I thought, “Ugh, what if the strike drags on and these bags start to pile up in front of my apartment. That will be embarrassing.” And then I thought, maybe I’ll take that extra 10 minutes and bring my mug and use some Tupperware today. Not that I think it will save the world – too grand a goal for a Thursday morning – but it will help save face. It may not have been the noblest thing I’ve done all week, but it just might be the best.