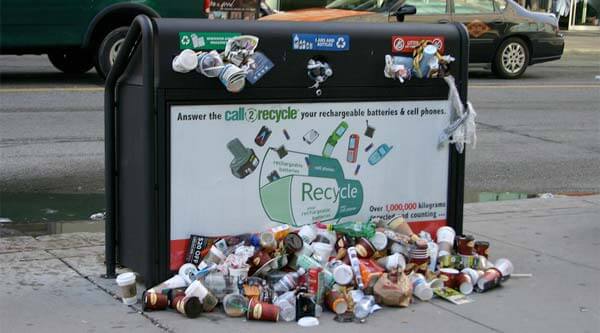 The buzzword around Toronto for the past two weeks has been “garbage.” The garbage that is pilling up around public canisters into miniature CN Towers. The garbage that is filling parks and arenas a quarter full arousing smells and attracting pests to local neighbors. And the garbage Torontonians left behind after the celebratory mess of the Pride Parade and Canada Day.

Its day 12 of a public workers strike in Toronto and already there are signs of our livable-city utopia coming crashing down as garbage stinks up our homes, city and, apparently, attitudes. Some argue the city is keeping its cool. But like all things under smoldering summer heat, it can only keep so long until it ferments. This summer Torontonians will need to face the problem festering in the bins outside our houses: the enormous amount of waste we make.

According to the Toronto Star, Ontario produces 12.4 million tonnes of garbage annually. That is the equivalent weight of more than 80,000 fully loaded Boeing 707 jetliners. Out of that, only 3 million tonnes—just 20 percent—of garbage is diverted into recycled goods despite our aggressive recycling system. Many Ontario landfills will reach full capacity in less than 20 years.

But we can’t blame Starbucks and the Coca-Cola water brand Dasani for this. We are the consumers creating this waste. And while climate change is the umbrella issue of our time, there are other issues that get veiled over. Like the big smelly elephant in the room that nobody likes talking about – our consumption and the waste that follows it.

As individuals, there are many ways to reduce our trash footprint. Adria Vasil promotes several ways to do this in her EcoHolic column, including: composting, going meat-free, package-free, as well as things we commonly don’t think about—such as separating our condoms and “hygiene products.”

GarbageRevolution.com is a film and website that experiments with keeping one’s garbage for an extended period of time to assess our individual garbage output.

There are plenty of additional ways we can redirect our waste into more useful means outside of dumpsites. Treehugger reports that Broward County, Fla., for example is using garbage as a resource in waste-based energy production, creating alternatives for our energy crisis.  And Houston’s Waste Management will be converting garbage into fuel and electricity with waste gasification in a joint venture with InEnTec, says Kevin Bulls in Technology Review.

There are plenty of ways of slimming down and transforming our waste streams. But the one thing we can’t do is continue to think of garbage as a simple summer inconvenience with the public workers strike.  Otherwise we will literally sink communities and the oceans with our Timmy’s coffee cups. Let’s be bold and face our own stink.