It is my birthday this week. As I turn 25, there is one question I face: do I have a future? My life from here on out, and the lives of my generation, will be shaped by the choices we make now. The choices we make depend on one word: energy.

We are at a precipice. We either make a paradigm shift in the 21st century with our energy consumption. Or we stand to repeat the 20th century with “fossil fool” reliance and be doomed. Essentially, I either have a future or I don’t.

Energy sourcing will be the most important issue in the next 10 to 20 years and will shape the remainder of this century, as well as beyond. Presently, 86 percent of the world’s energy comes from fossil fuels — oil, coal and gas. These energy sources ave shaped our way of life in the 20th century, providing us with our technological advances and many creature comforts along the way. But running cars, heating up our bathtubs and blaring TV sets come with a price tag of more than just money.

The price could be the my generation’s future. Fossil fuels are destroying landscapes with strip mining (such as what’s happening in the Appalachian Mountains for coal), polluting air and water, and is the number one contributor to anthropogenic climate change.

Yet there are reasons for hope as U.S. President Barack Obama has shown great strides in changing energy practices. The president plans to make sustainability “the centerpiece of a new American economy.” He aims to implement a “Green New Deal” that would double solar, wind and biomass energy sources and cut U.S. dependency on oil with fuel-efficient auto standards. These transformations can create jobs and make for a more energy-secure superpower.

However, developing countries like China, India, and parts of the Middle East will still account for 80 percent of future oil demands. Therefore, “fossil fuels will continue to meet 80 per cent of global energy needs for the foreseeable future,” Thomas Axworthy recently wrote in the Toronto Star.

And if there is no global plan to reduce emissions, scientists are now stating there is a 90 percent probability that temperatures will rise between 3.5° to 7.4°C on the earth’s surface. This will have a horrendous impact on all life on the planet.

Hence, there needs to be a global energy shift. Some argue that this shift comes in the form of nuclear. Jeremy Nelson makes this argument in the current cover story of This: that to battle climate change, he says, it’s not renewables we need to turn to, but an older generation of power, nuclear. He argues that solar and wind energy is unreliable because they fluctuate, and still lag in development, while nuclear energy is zero-emissions now.

Despite grudgingly agreeing with Nelson that to be a pro-environmentalist today might mean being pro-nuclear, there is still a mighty can of worms being opened with nuclear power generation. 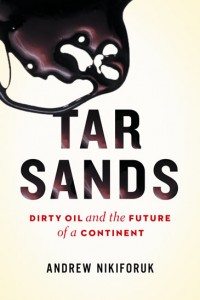 Nuclear might in fact be used to accelerate Canada’s desire to become the next fossil-fuel superpower: It will be used for the energy needs of the Alberta tar sands, says Andrew Nikiforuk in his book Tar Sands: Dirty Oil and the Future of a Continent. Nuclear would assist in the production of the unconventional oil that already emits three times more greenhouse gases than a conventional barrel of oil does.

So ironically, increasing nuclear power in Canada may actually increase fossil fuel emissions, rather than lowering them. There are some benefits to shifting now to a low-emission nuclear — but nuclear is not the be-all-and-end-all for energy. At best, it might be a temporary solution for action today, this year, even perhaps for the next 10-20 years on climate change. But for the remainder of the century, other means of energy need to be considered.

We, as humans, think we know it all. But perhaps we don’t know what the energy of the 21st century will be yet. Perhaps it is in research and development that we could find it. The Obama administration has recently given stimulus to R&D with 3 percent of the nation’s GDP — that is US$46 billion annually — put into prospects for the future.

Is my sense of urgency premature? I am, after all, only 25. But this is the year, a make-it or break-it year, with the Copenhagen Climate Conference. A year that is our next, and probably final, chance for a climate agreement to make fossil fuels history. We either have a future or we don’t: the answer depends on shifting energy — and shifting now.

Emily Hunter is an environmental journalist and This Magazine‘s resident eco-blogger. She is currently working on a book about young environmental activism, The Next Eco-Warriors, and is the eco-correspondent to MTV News Canada.