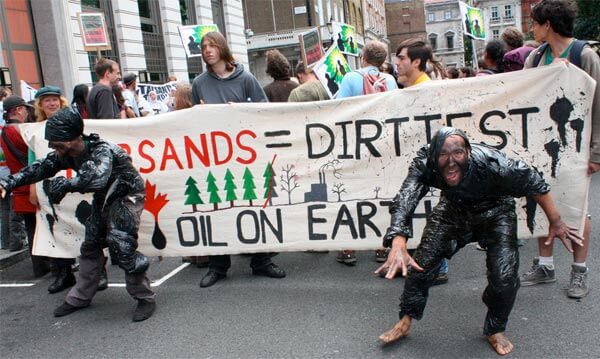 I was pretty sure I knew what the Canadian flag, held upside down, was supposed to represent. But I had to ask anyway.

Last Monday afternoon, standing outside the Houses of Parliament in London in Parliament square, I held my cell phone aloft with a hundred other protesters, taking part in a “climate flash mob,” a seemingly spontaneous but pre-arranged protest against the British government’s inaction on climate change. Everyone was there to flood MPs with phone calls demanding a fair and effective treaty at Copenhagen this December.

Nearby a man stood, holding an upside-down Canadian flag.

“Sorry to bother you—but why are you holding the Canadian flag upside down?” I asked, a little timidly (I figured with my accent he might clock my Canuck identity and tell me off).

“Flying a flag upside down is the internationally recognized symbol of distress,” he answered. “We are facing a climate emergency—and there is no better symbol for that than the nation of Canada.”

Given that Canada has higher per capita greenhouse gas emissions than any other G8 nation, and was branded the “Colossal Fossil” at climate talks in Poznan, Poland, last year for blocking efforts to arrive at an effective treaty on climate change, I couldn’t argue with him.

In fact, I wasn’t even surprised to see him. Three weeks ago I witnessed a throng of hundreds of Brits march to our High Commission near Trafalgar Square singing “Blame Canada” and denouncing our ever-expanding tar sand operations.

There wasn’t a single defence I could muster—nor could I even be bothered to try.

It’s not often you can find it embarrassing to be Canadian—especially living in England. Jokes about bad teeth, wimpy winters and rampant alcoholism aside, Canadians can easily find wedges to prise apart the British pride: their public education is so patchy and frequently so dismal that fully a fifth of ten year old boys cannot count to ten; the National Health Service has such long wait times than even the leaders of the most left-wing parties send their own kids through the private system (I myself have found OHIP to be far more speedy and responsive in the time I’ve lived here); the racist British National Party has grown so much in popularity in the past few years that they now boast a seat in the European Parliament; and of course, there’s the undeniable, irrepresible and incredibly reprehensible classism that still pervades every pore of British society and that irks every inch of my egalitarian Canadian sensibility.

So like all Canadians, I revel in poking fun at the Brits and pointing out their strange laws and habits wherever possible: “Why does the subway close at 11:30?” “Does that man have to smoke crack directly next to me on the bus?” “You wouldn’t be so short if you didn’t all start smoking at 10 years old.” And I’m not alone. You won’t find an Aussie, Kiwi or Canuck in the country who doesn’t constantly delight in poking fun at the British temperment.

And when it comes to matters of ecology, Canadians, with our undeniable and irrepressible tendency to smugness, feel innately from a very young age that we are the world’s pre-eminent environmental stewards: wholesome, rosy-cheeked hewers of wood and drawers of water. But national narratives are just that: ideas, legends, and myths.

Because when it comes to our actual environmental track record, Canada has no reason for even a smidge of smug patriotism. We lead the developed world in greenhouse gas emissions and have been a consistent impediment to international climate change negotiations. Even China is willing to make more of a verbal pledge to change its ways than we are (even if the gesture is merely symbolic, at least they’ve made it). We not only supplied the uranium dropped on Japan more than 60 years ago; today we still lead the world in uranium production. We are one of the worst culprits when it comes to overfishing: we drained the Atlantic of cod, then blamed the Spanish and the seals. Now we’re doing the same to our west coast salmon, and we can’t even be bothered to call off the hunt on the grizzlies we’re starving.

And now, most embarrassingly, we boast what is rightfully being called “the most destructive project on earth,” the infamous tar sands.

If you take a hard look at the worst ecological offences we have committed, it’s hard not to draw the conclusion that Canada actually has one of the worst environmental track records of any nation. It’s embarrassing.

And when you also take a hard look at how we have treated indigenous and aboriginal groups, our history becomes even more flinch-worthy. Thanks to legal loopholes that leave legal liability for “Indian Affairs” in legal limbo—split between federal and provincial jurisdiction—First Nations reserves have always been more likely to be polluted with radioactive waste from uranium mines, toxic runoff from tar sands operations, and hormone-mimicking gases from petrochemical smokestacks.

Our historical track record, is at the very best, embarrassing. When you throw in our ongoing peddling of asbestos to developing nations and our refusal to allow it to be added to a UN-sanctioned list of toxic substances, our report card is downright humiliating.

And what is most infuriating is that it is precisely this reputation, of being exemplary in environmental and human rights matters, that allows us to be exactly the opposite. Ignorant of the true nature of our behaviour on the world stage, we have failed to hold our government (and ourselves) to account and to demand better. And because of our (increasingly false) reputation, the rest of the world has failed to hold us to account too.

That is starting to change. The protests in London this September are just the beginning. Environmental campaigners here have pledged to launch a long-term, media-savvy, and vociferous campaign to make the British public aware of what is going on in the tar sands, and to do their part to put and end to the involvement of Britsh banks and extraction companies there. The Canadian flag will continue to hang upside down, the High Commission will continue to be blockaded by indignant protesters, and our national identity will continued to become synonymous with “the most environmentally destructive operation” and “the dirtiest oil” on earth. The campaign will undoubtedly spread to the continent, and the rest of the world.

There is a way to prevent this, though: we can head them off at the pass. We can clean up our act as quickly as we can, cut our carbon emissions, increase our energy efficiency, and move on a large scale to renewable energy (which makes just as much economic sense as environmental sense: the tar sands won’t last forever).

And with all the resources, energy and wealth at our disposal, and with such a diverse, well-educated and (in many respects) liberal, tolerant and politically enlightened population, we actually have a greater capacity than any other nation to invest in a massive conversion to a sustainable and clean economy.

We have every reason to do so—and absolutely no excuse not to.

Zoe Cormier is a freelance environmental reporter from Toronto now based in London, England, and the former author of The Green Report: a regular column on environmental affairs in the Globe and Mail. Her first-person account of her evolution as an environmental correspondent, published in This Magazine in 2008 will be featured in a textbook for children forthcoming in 2010.