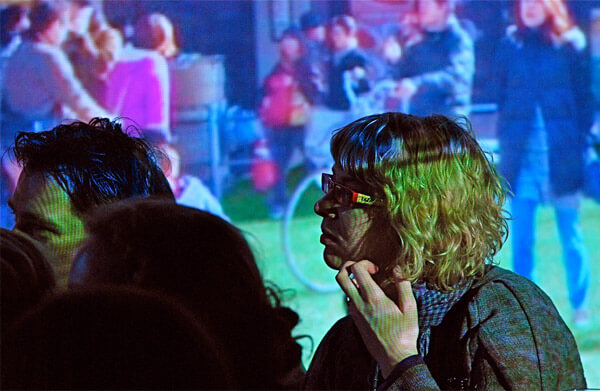 On an outdoor patio in Kampala, observers lounge in the near-darkness, watching as an image is projected on a bare white sheet slung between two trees. In Reykjavik, a spellbound audience fills a basement bar and waits for the first slide to illuminate the wall. And in Toronto, a crowded pavilion is abuzz as the lights dim and the first presenter takes the stage. In 181 cities speckling the globe, Pecha Kucha is bringing people together for art, design, and change.

The concept is simple: presenters each show 20 slides, and each slide is shown for 20 seconds. Originally created as a way for designers and architects to share new projects and ideas, Pecha Kucha (Japanese for “chit chat”) has expanded to include participants from virtually every field. Presenters include artists, politicians (Toronto mayor David Miller, for example), comedians, and journalists, among others. Though the concept is only six years old, 2008 saw an impressive 370 Pecha Kucha nights around the world.

Perhaps more remarkable than Pecha Kucha’s rapid global proliferation is the face-to-face exchange of ideas and creativity that happens at every event. Word about the presentations has spread largely through the internet, making Pecha Kucha a rare example of a web-based phenomenon that encourages real human interaction.

It has also proved to be a fantastic showcase for unknown talent. “One of the biggest surprises,” says one of Pecha Kucha’s creators, Mark Dytham, a British architect who has been living and working in Japan for the last 20 years, “was that in some of the smaller cities, people would say, ‘That was amazing! We had no idea there was so much creative talent working right here.’ It’s as if people don’t realize what they have right at home, because we’re not really communicating effectively anymore.” Dytham co-founded Pecha Kucha with Astrid Klein in their creative studio in Tokyo.

At a recent Pecha Kucha night in Toronto, Dytham’s cure for ineffective communication was put to the test. Bob Hambly, of the graphic design firm Hambly & Woolley Inc., a thin middle-aged man in a black polo shirt, was the first to present. In a slightly nasal voice, he explained that his presentation would be on “the design and art of nature,” at which point a 10-foot image of a parrot in a wooden box was projected onto the screen behind him.

Hambly launched into a mile a minute lecture on the natural world as creative inspiration. The screen flashed 20 images, among them: Australian salt ponds, an Audubon print of a swan, a nautilus shell that spirals in a perfect Fibonacci sequence, and a dead lamb encased in glass, courtesy of conceptual artist Damien Hirst.

Hambly’s speech proved too long, and his words streamed out with increasing speed to catch up with the slides. The presentation’s climax came when, during a projection of his birdnest collection, Hambly pulled out a real nest, crushed it, and watched it bounce back into its original form, demonstrating the Weaver bird’s knack for resilient design. The audience cheered and Hambly concluded with a quote from architect Frank Lloyd Wright: “Study nature, love nature, stay close to nature. It will never fail you.”

Hambly’s presentation served as a six-minute and 40-second highlight reel of a career’s worth of creative inspiration. It is this enforced brevity that discourages obfuscating digressions and promotes precision. Pecha Kucha distills the motivating idea to its essence; clarity, if not always depth, is a happy consequence.

With an event almost nightly somewhere in the world— including regular presentations in Toronto, Montreal, Vancouver, Edmonton, and Halifax—Dytham hopes to harness the worldwide enthusiasm for Pecha Kucha to address social, political, and environmental issues that could benefit from the design community’s attention. “I’m tired of going to design conferences and seeing another really funky-looking chair, another really funky-looking building,” says Dytham. “We want to support people who are making things that will improve people’s lives and the world in a tangible way.”