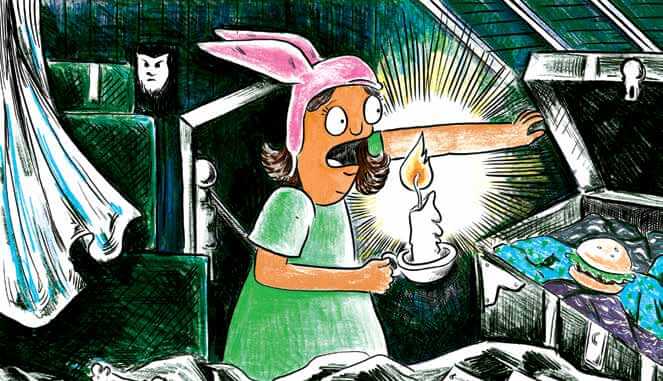 At nine years old I was an under-the-covers reader. Even on nights when my parents were distracted by their cassette tapes and homemade wine, I wouldn’t risk turning on my bedside lamp after 8:30 p.m. Maybe my parents knew I was deep into the world of Nancy Drew or Encyclopedia Brown under those blankets, a flashlight illuminating the clues and cliffhangers on the pages.

Now, almost four decades later, I’m once again reading Nancy Drew books at 8:30 p.m. every night, only in my 10- and eight-year-old sons’ room. We join Nancy as she investigates mysterious bungalows or stolen clocks, and my youngest son makes wild guesses about what the criminals are up to. Both boys are often still debating plot possibilities after I turn out the light. I don’t think they read under the covers after I leave, but I wouldn’t mind if they did.

The popular culture of my kids’ generation is phenomenally different from the pop culture I grew up with. There is more of it, for one thing: an abundance of TV channels and streaming services, music apps that let them listen to what they want when they want, and many more book series tailored to their age group. Yet the appeal of a child detective is untouchable.

So much media for children in the tween and teen years features kids doing adult things with little adult interference. Teen-detective stories are appealing at this developmental stage because they provide examples of how a person can remain a child, while accessing the bravery associated with adulthood. Because growing up is scary.

In the most recent Nancy Drew novel I read aloud, Nancy gets knocked out then spends several chapters trapped in the gross basement of a bungalow in the middle of nowhere. For me, this is terrifying. For my kids? Well, they take it in stride. Their faith in Nancy is unshakeable. Nancy is brave, and smart—she can handle anything.

The day after we read this section of the novel, my eldest son is starting at a new summer camp. He is excited, but clearly nervous, bouncing around the kitchen, checking his outfit in the mirror, speculating on every detail of how the day might go. He is in no physical danger, but freaking out about this adventure into something brand new. Watching him go through these emotions gives me some insight into why children around his age are so attracted to stories where they see kids confronting the unknown and emerging triumphant.

And in those older mystery novels, that’s where it ends. The mystery is solved, the teen detective wins. Then everyone goes back to their sock hops—until the next mystery crosses their path. But there’s something missing from those older detective books: how do the characters feel as they go through these intense experiences? Did Encyclopedia Brown ever contemplate whether he could live up to the expectations placed on him by his father? Did Nancy Drew ever ponder her own mortality after being hit on the head repeatedly by the bad guys? Did the Hardy Boys ever wonder if their close sibling relationship would survive into adulthood? We don’t know.

These stories were written in an era where children were not expected to examine their inner lives, even as they navigated the complex emotional path to adulthood. It is something that the books published before the 1960s rarely touched upon, but I’m starting to see it in more contemporary stories. Weirdly, the place I’ve seen this navigation of a child’s inner life chronicled with the most depth and heart recently was in The Bob’s Burgers Movie.

It’s a bit of a left turn, I know, going from the classic Nancy Drew novel to an animated musical comedy about a family running a burger restaurant in a fictional town on the east coast of the U.S. And I certainly wasn’t expecting a tween detective story to shape the narrative of the full-length Bob’s Burgers movie, when I took my own family to the movie theatre for opening night.

For those unfamiliar with the series, Bob’s Burgers chronicles the ups and downs of the Belchers: parents Bob and Linda and their three children, 13-year-old Tina, 11-year-old Gene, and nine-year-old Louise. They scrape by on the profits from their underrated burger restaurant, and each episode draws viewers into their flawed but heartwarming family life.

In the full-length film, Louise is positioned as a central character as she unravels clues related to a murder mystery that many of the characters are attempting to solve. It is Louise who finds the skeleton that prompts the discovery of the murder in the first place, and in the space of a few minutes her character goes from confident and sarcastic to reeling in terror. This, combined with being teased in the school yard for her attachment to a bunny-eared hat she has worn since early childhood, sends Louise into a spiral of self-doubt. Contemplating life without her beloved hat leads her to conclude the only way she can prove that she is brave and not—horror of horrors—“a baby,” will be to solve the murder mystery. The adventures that ensue and the eventual conversations Louise has with her family allow her to gain a stronger sense of self.

This is not a coming-of-age story. Louise doesn’t get through these trials by making a clear transition into adulthood. Rather, it is a story showing the tiny steps children approaching adolescence must take to understand themselves a little better. Louise is working to solve a real, messy, grown-up mystery, while also grappling with the fear of removing her signature childhood hat, after so many years of clinging to it for security and a sense of self. The murder is ultimately solved, but the important story is really Louise’s emotional growth. In a scene near the end of the film, we watch as Louise backflips off of a horizontal bar in the school playground, and her bunny ears fall to the ground. The viewer never sees the character without her hat, but the movie shows her calmly retrieving it and placing it back on her head. The hat has become a choice rather than a desperate emotional crutch.

As the mother of a 10-year-old, I see struggles like these play out every day with my own child. I’m conscious of the trend of encouraging children to acknowledge and name their feelings, a trend that was very much not present when I was growing up in the 1980s. Recently, my son woke up on a school day and immediately declared he was sick. This had been happening a lot since the pandemic, and I was suspecting it was more emotional than physical. When I was a child, there was no such thing as a permissible “mental health day.” If I didn’t want to go to school, too bad. Faking sick was the only way to get out of it, and I could see my own kids using that age-old technique. But all it took was a quick discussion about how it’s okay to be overwhelmed and a little freaked out about whatever lies in store beyond the safety of our family home, to shift the narrative. I’m glad this shift to naming and discussing feelings as a tool for handling life’s challenges is making it into the beloved child-detective genre too, in its modern incarnations.

When my family went to see The Bob’s Burgers movie, it was Louise’s story that stood out for us, providing an unexpectedly emotional and nuanced look at the character. Viewers of the TV show have almost never seen Louise without her hat, and over multiple seasons, the hat has rarely been acknowledged or mentioned. It’s just a part of Louise, a character many viewers have grown to love.

Watching her grapple with a personal change that seems small but is actually huge for a child, all while trying to solve a murder, connects the audience to Louise more than I ever felt connected to the unemotional teen detectives of the past. And last summer, whenever we were driving somewhere for a family trip, my kids would play the movie soundtrack. Listening to them sing Louise’s words in the song “Sunny Side Up Summer” always got me: “Each and every day/ I just think I’m pretty great/ yep that’s right/ no big deal/ I’m not hiding what I feel.”

Louise may not have the clean-cut poise of Nancy Drew or the methodical detachment of Encyclopedia Brown, but in The Bob’s Burgers Movie she’s the messy, modern kid detective we all deserve.