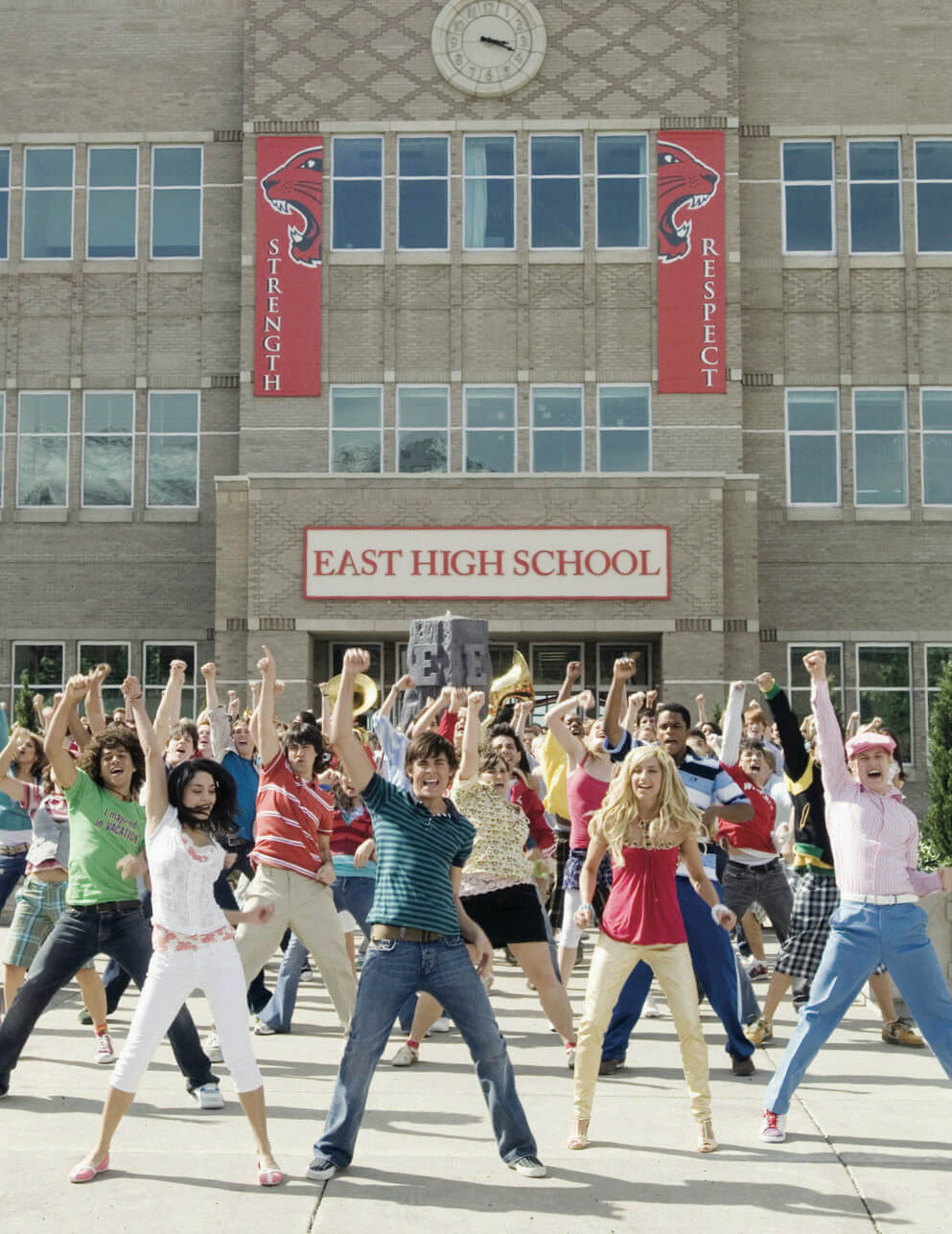 In the summer of 2008, I became obsessed with High School Musical.

My family and I were “visiting” my paternal uncle in Canada at the time. I say “visit,” because it was more of a two-month trial for my parents to gauge whether or not they wanted to immigrate here from Lahore, Pakistan.

During the days, my aunt and uncle took our family to downtown Toronto for sightseeing. At night, they let us make a small dent in their enormous collection of Bollywood films.

During a visit to the Toronto Public Library’s Yorkville branch while on a break from sightseeing, I picked up High School Musical: The Junior Novel, a novelization of the Disney Channel Original Movie (DCOM) of the same name. After reading (and re-reading) the novel, and repeatedly flipping through the eight pages of photos of the movie’s cast inside it, I became obsessed with High School Musical.

High School Musical was released on the Disney Channel two years earlier, in 2006. The film is, as the name suggests, a musical set in a high school, one named East High. Its plot centres on Troy Bolton and Gabriella Montez, who first meet at a New Year’s Eve party—during which they discover their love of song together—and later at East High where Gabriella is a transfer student.

Though Troy is the captain of the basketball team and Gabriella eventually joins the scholastic decathlon team, they both decide to follow their newfound love of music and audition for the school musical together. Their decision inspires admiration from other students, who also decide to reveal their secret passions; derision from their friends, who try their best to convince them to “Stick to the Status Quo” (a song from the movie); and outrage from the drama club royalty, Sharpay and Ryan Evans, who try to sabotage them.

The movie premiered to an audience of 7.7 million, the highest-rated premiere for a DCOM ever at the time. Fifteen years after its release, it remains the ninth most-viewed premiere of a DCOM, while its sequel, High School Musical 2, claims the first spot with 17.2 million. It has left behind an enormous legacy.

In the novel, Troy and Gabriella feel “a spark of electricity” while singing to each other that leads them to almost kiss as the clock strikes midnight on New Year’s Eve. My prurient, pubescent brain became so fixated with that scene that I re-read it nearly every single day before returning the book. My fixation eventually evolved into a desperate need to watch its source material and witness the chemistry between Troy and Gabriella for myself.

However, since two years had passed since the film’s release, Family Channel—which owned the rights to broadcast Disney Channel shows and films in Canada—did not air a rerun and my cousins didn’t own the DVD.

When I requested them to reserve a copy at the library, I found out that it had a months-long waiting list. When I sought out the DVD in stores, its price—$19.99, as I recall—seemed exorbitant when I converted it into Pakistani rupees. When I tried to search for snippets of it on YouTube, all I found were lyric videos featuring stills from the movie.

When I finally returned to Pakistan, bought the DVD—and its sequel, which had been released a year earlier—and watched the movie, my desperation didn’t dull; it matured into mania.

I turned on the subtitles during the songs so I could write down the lyrics to memorize later, rewinding the scenes so I could get the number of getchas in “Get’cha Head in the Game” right. I practiced the “Bop to the Top” dance routine in my bathroom—my DVD had a dance practice in the bonus features. I recorded the songs onto a cassette so I could listen to them without having to set up my DVD player.

I slobbered over Zac Efron, squealed after learning that he and Vanessa Hudgens were dating and shipped—though I didn’t know that was the term for it—them together. I scoured the web for any and all news of High School Musical 3—which was released in October that year—during the short bursts in which I was allowed to use my parents’ computer. I begged my mom to buy me books from the High School Musical book series and became the proud owner of High School Musical 2: The Junior Novel, as well as four other books in the series.

I probably would have accumulated more had I not suddenly been forced to give most of my books away. My parents had enjoyed their free trial and decided to immigrate to Canada.

My parents moved our family from Lahore, Pakistan to Toronto eight months later in March 2009, in the middle of my Grade 6 school year. Though I was devastated to leave all my friends and extended family behind, I decided to view the move as the “Start of Something New” that Troy and Gabriella had sung about. However, when I arrived in Canada, I found out that High School Musical had left me woefully underprepared to navigate the North American school system.

Though my family did have a DVD player (after numerous years of breaking and fixing our VHS player), we didn’t have cable. Thus, much of what I’d learned about North American schools aside from High School Musical was through brief snippets of sitcoms on Nickelodeon and the Disney Channel, depending on what my maternal cousins—who did have cable—felt like watching.

What I’d gleaned from reruns of Kenan & Kel, Kim Possible, That’s So Raven, Phil of the Future, Drake & Josh, American Dragon: Jake Long, and Hannah Montana was that all North American schools had cafeterias that were filled with tripping hazards, science labs where experiments always went awry, and locker-laden hallways where conversations, confessions, and confrontations happened—sometimes at the same time.

This was in stark contrast to my school in Pakistan, where students brought all their textbooks and notebooks to school every day in heavy backpacks, which was probably why they stayed in one classroom throughout the day unless it was for music, gym, or lunch, and ate the aforementioned lunch in the school yard.

I’d also learnt that North American students had surprise pop quizzes, free (but not always appetizing) lunches, and no uniforms; that every school had a teacher who hated you, an athlete that everyone worshiped, and a popular blonde girl who never hesitated to sabotage you; and that it didn’t take long for new students to fit in.

I envisioned myself as Gabriella at my new school. I had brown hair and brown eyes; I had the grades and the love for reading; and I had a decent voice—I had been part of the school choir in Pakistan. I failed to take into account, however, that I also had the label of “immigrant” attached to me.

As an immigrant student, I spent several months figuring out whether pencil crayons were pencils or crayons (they were coloured pencils), what Language Arts was (English), and why students had to change into gym clothes (in Pakistan, we just had to change our shoes). As a Muslim immigrant student from Pakistan, I fielded microaggressions about my “good English,” why I didn’t wear the hijab (I started wearing it full-time in Grade 8), and how I was so smart.

This experience, I later found out, was not limited to me; many new immigrant students in North America often struggle to overcome the sociocultural and linguistic differences present between their native country and their new country. These struggles are further amplified if the students are racialized and belong to minority faiths, given how deeply Christianity and xenophobia are entrenched in the entire North American education system, including Canada.

Whether it is due to their race, religion, or culture, or an intersection of all three, BIPOC students often face both covert and overt racism, not only at the hands of their fellow students but also teachers and school staff.

Despite how common this experience is, however, immigrant and refugee students are almost never represented in mainstream media. When they are, they are often Long Duk Dong-esque figures used as punchlines because of their “weird” food and even weirder behaviour.

Though the casts of movies and TV shows aimed at teens have been slowly diversifying in the decade since I immigrated, the BIPOC actors almost always play supporting characters to white leads and the movies and TV shows they star in almost never capture the racism and microaggressions many BIPOC students experience in the education system.

This is also the case in the High School Musical cinematic universe. As long as the student in question is kind, hardworking, and tries their best, they can achieve everything they want. The closest High School Musical comes to showing BIPOC students’ experience in the education system is the drama teacher Ms. Darbus’s dismissive attitude toward Troy’s best friend and basketball teammate, Chad Danforth, who is Black.

Many of my teachers, throughout both middle and high school, demonstrated an amplified version of this attitude. Ms. Darbus’s attitude was limited to telling Chad to settle down in class and implying in conversations with his coach that Chad’s athletic accomplishments outweighed his academic ones. My teachers, however, regularly lambasted racialized students—especially Black boys—for ordinary offences such as being late, wearing caps, and chewing gum inside the classroom; derided them for being “loud” and “disruptive;” and treated them with decidedly less empathy than their white students. I vividly remember my Grade 8 teacher rolling her eyes at several female Black students for cheering too loudly during a school event.

Though I couldn’t earn Gabriella’s popularity, I did eventually earn her reputation of being my high school’s “freaky genius girl”—though I was more freaky than genius.

I couldn’t participate in many extracurriculars like the students in High School Musical because they required both time and energy. I needed someone to give me a ride to and from rehearsals, games, and performances; someone to pay for jerseys, equipment, instruments, entry fees, and hospital bills in case of injuries; and someone to persuade my teachers to give me extensions for deadlines that I would miss for these extracurriculars. I felt hesitant asking my parents for this, knowing how hard they were already working.

Thus, I decided to excel in the classroom instead, causing students in my grade to mock me behind my back for being a teacher’s pet. They didn’t realize that this was the only way to ensure that I received the same opportunities as my white counterparts and that despite it, I still often got passed over for opportunities, awards, and empathy in favour of my white peers. I once had a teacher yell at me to go find a park bench when I fell asleep in class after staying up all night to finish assignments.

Thirteen years have passed since I first became obsessed with High School Musical, six since I graduated high school. Yet sometimes I still seethe with anger at the callousness that I and my fellow immigrant, racialized students experienced—and continue to experience—in the Canadian education system. I wish I could go back in time, armed with the knowledge and confidence that I now possess, and stand up to the teachers and students who doubted, dismissed, and derided me and my peers.

Fifteen years ago, Troy and Gabriella and the rest of the East High Wildcats assured the world that “We’re All in
This Together.” They were wrong.