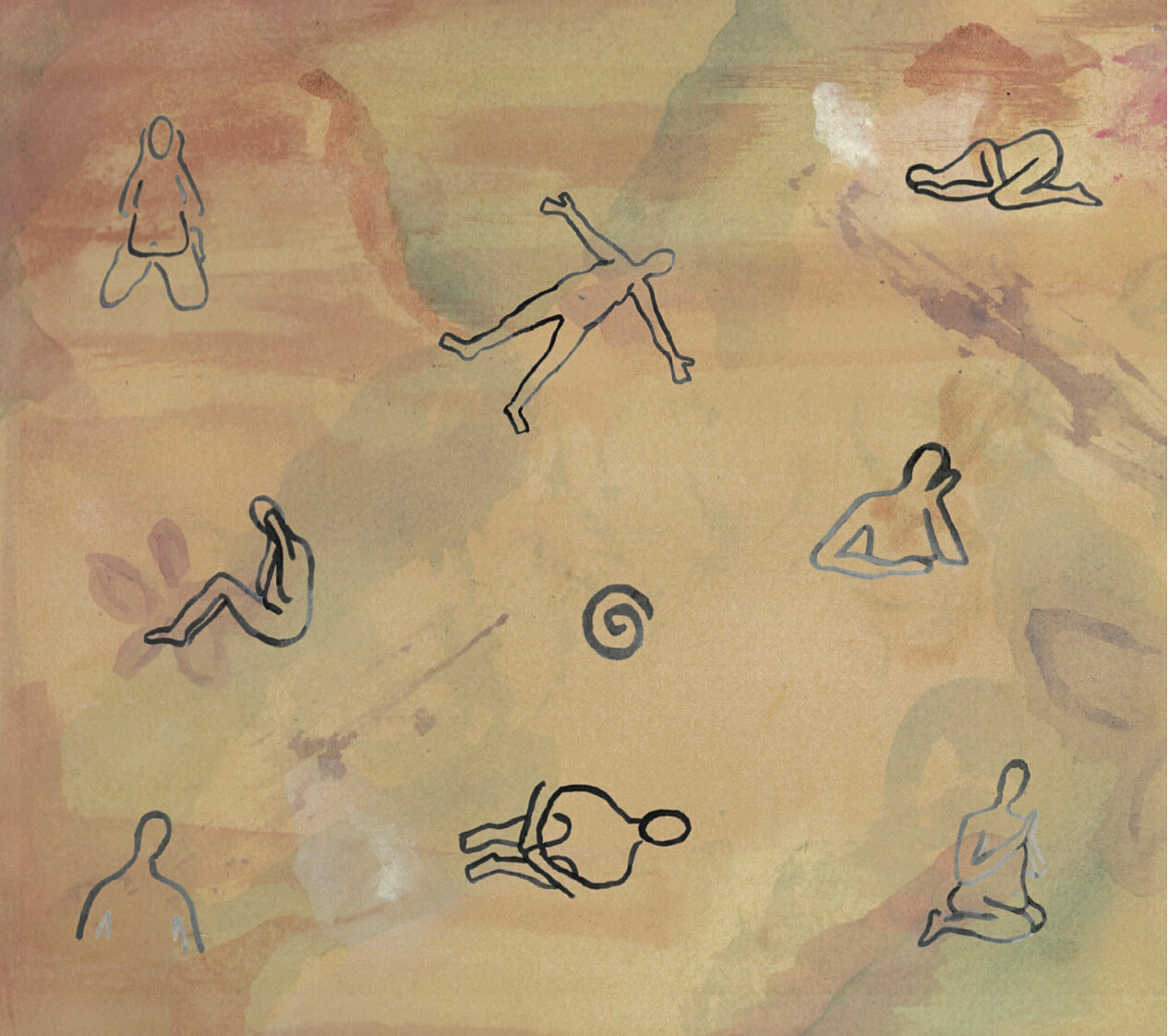 I haven’t suffered loss nearly at the scale of many people since the pandemic started. But I have suffered loss. And I’ve been preoccupied with what to do with that feeling, during a time when touch and physical presence are treated on par with the deadly disease that they could spread. I’ve struggled to process tragedy when it keeps being supplanted with newer tragedy.

My first experience with loss during the pandemic happened in the summer of 2020, after our first round of provincial shutdowns. I had spent a couple of months

learning how to socialize remotely and had made a regular habit of messaging friends with a level of intention that didn’t exist before 2020. It seems fitting that the news would be relayed via an Instagram DM. A friend responded to a casual message of mine with the news that another of our friends had just passed away.

It’s hard to forget the visceral feeling of numbness I felt in that moment, and yet I have a very foggy memory of the hours that followed. It didn’t seem possible in the early months of the pandemic, but I somehow disconnected even more from my surroundings. In the hours and days that followed, I struggled to understand what I was feeling. All of my friends and social life had become abstractions: texts, social media interactions, and video chats. It didn’t feel quite real to think of losing a friend even beyond that.

True to the early months of the pandemic, I eventually came to terms with not knowing. I never found out exactly what the cause of death was, and didn’t feel the urge to know. I was still sanitizing my groceries and pausing my runs until sidewalks were clear. Nothing about our world felt certain, least of which being whether this friend had contracted COVID-19 or was the victim of a backlogged hospital system. I had resigned myself to accepting so many uncertainties that by the time I actually was able to speak with friends in person about her passing, I didn’t feel like I had anything meaningful to say about it.

About a month and a half later, I was driving back from a camping trip in the Kawarthas when my brother called me and told me my aunt in Calgary had just passed away. He called me just as I got on the road. I spent the rest of the two-hour drive quietly losing the post-camping trip high and preparing for an uncomfortable emotional setting. I walked into my family’s household, filled with tears and silence. My aunt had suffered a heart attack on the front steps of her house. By the time anyone realized what had happened, it was likely too late. She was taken to the hospital but passed away soon afterwards.

In the days that followed, my father expressed his need to fly to Calgary to be with his brother and family during the funeral. I decided to accompany him. In the lead-up to meeting my relatives in Calgary, I was preoccupied with the terrifying logistics of a domestic flight as COVID-19 rates seemed to be increasing. But once we arrived, I experienced something I hadn’t felt in almost a year: human emotion overwhelming our strict compliance with pandemic precautions. While we continued to wear masks in public and socially distance with extended family and friends, I was very aware that we were stretching the idea of a “social bubble” beyond recognition. I can’t justify my compromises, but I don’t regret them either. Immediately wrapping a crying cousin in a hug was an instinctive reaction. It might have been the first spontaneous moment of physical embrace I’d experienced since April 2020.

However, the grieving process and actual funeral were undeniably overshadowed by the pandemic. In Punjabi culture, friends and family will individually visit the grieving family. I’ve always suspected that the small talk over tea and biscuits, punctuated with genuine expressions of sadness, anecdotes, and comforting gestures, creates a sense of repetition that helps avoid wallowing. Understandably, fewer people felt comfortable visiting in person. In the absence of ritual and activity, our family sat uncomfortably in the sadness and the silence.

The actual funeral was filled with reminders of how our ability to comfort and grieve was impeded by the pandemic. Seating was spaced out, and almost half of the attendees were seated in another room and viewed the ceremony from a livestream. I watched the only visible parts of my family’s masked faces become wet with tears, from six feet away. Eventually, the dam did break and people began ignoring COVID-19 measures, intermittently taking off their masks and holding each other. My sadness was interrupted with thoughts of how the news would cover a possible super-spreader event at a Punjabi funeral. The pandemic always had a way of inserting itself back into the picture.

I was spared personal loss for several more months (other than a COVID-19 scare in my immediate family). I spent a lot of that spring tweeting about local and global vaccine inequity. I don’t think I was the only person feeling guilty over their ability to get vaccinated while poorer, more precariously employed people were neglected. I knew I benefited from Canada’s ability to hoard vaccines, while countries with less access to vaccines were succumbing to more infectious variants.

In June, my younger cousin and uncle in Punjab contracted COVID-19. First my cousin, and then my uncle, were hospitalized and placed on ventilators. My family anxiously and helplessly waited for daily updates for over a week. And a few short days after we celebrated the fact that my cousin recovered and was discharged from the hospital, my uncle succumbed to COVID-19. Once again, I found myself in a household filled with tears and conspicuous silences. Only this time, we were under no illusion that we would be able to attend the funeral in person. I watched my father break into tears every day speaking on the phone with his crying nieces. Even fewer people visited our house in order to console him than when I visited Calgary. We conducted a Sikh prayer virtually with family in Canada and the U.S. in an attempt to capture some sense of togetherness and comfort. But it felt like the smallest of comforts. The larger-scale issues I had spent the last few months ranting about had come for my own family, and there was nothing we could do about it. A month later, my brother got married and I felt like we pushed away a sadness that we could do nothing about, in order to feel joy and celebration.

These were three wildly different experiences of loss, but each time I felt like I was forced to abbreviate my grief. Sometimes I butted up against the uncertainty of the pandemic, other times against concrete health risks. In every instance, I simply resigned myself to not being able to feel what I wanted or needed to feel, unencumbered by our new reality.

I found myself craving the grieving rituals, the familiar gestures of compassion that could feel tedious before the pandemic. I suspect we will all need time to come to terms with who and what we’ve lost (regardless of the scale of that loss).

I can’t pretend to know what to do now with these suppressed, abbreviated feelings; I just can’t remember a time when my ability to feel and process grief was this obstructed. With this pandemic still having no definite end in sight, most of us, at the bare minimum, could benefit from acknowledging that reality.