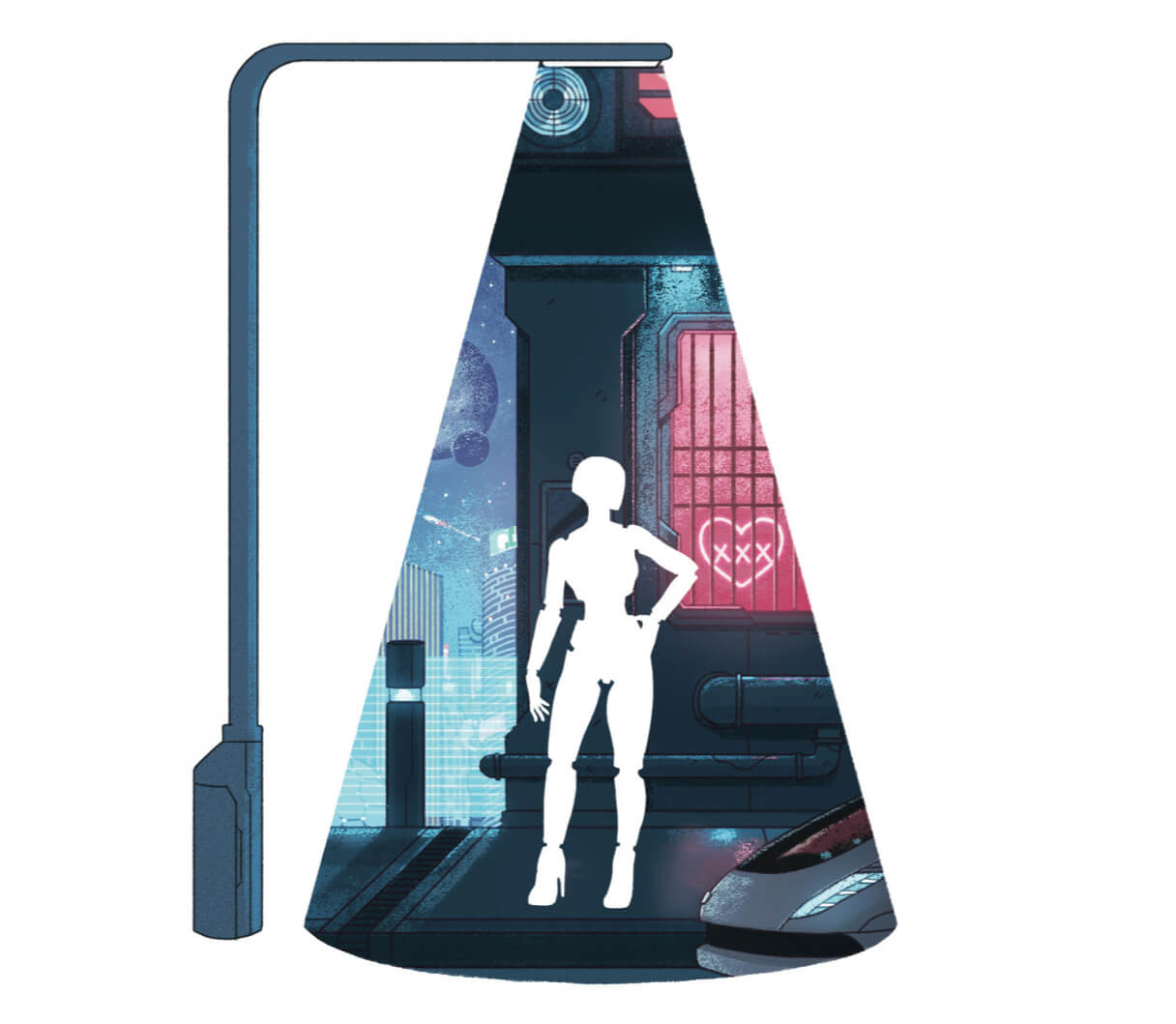 I love sci-fi. I have since I was a kid, and I especially love weird cyberpunk movies. Lately, though, the main thing I notice in sci-fi is creators’ inability to envision a world without violence against sex workers. This really hit me watching both the 1982 film Blade Runner and the 2018 Netflix original Altered Carbon. Both utilize a similar film noir in a dystopian future premise, which leads to having similarities in how sex work is viewed in their stories. Altered Carbon has sex workers as an integral part of the plot and Blade Runner utilizes pleasure bot gynoids as the villains and a more reserved, ladylike gynoid as the main love interest. They were released 36 years apart and yet nothing has changed when it comes to the perception of sex work in either. Once I started paying more attention, I started noticing the contempt sci-fi holds for sex workers beyond just these two works.

In sci-fi, the class divide between the ultra rich and the rest of the world is made abundantly clear. They show us the nice, clean, sterile environments where the nice, clean, usually white, ultra rich live and contrast that with the violent, chaotic, dirty slums of the rest of the city or world. In these slums there are bright, colourful images of women shaking their bodies around. Billboards, holographic projections, and full service sex workers are everywhere in the streets. It’s a male fantasy hyped up on gigabytes with humanoid, artificially intelligent cyborgs who can appear and disappear as needed. You can have it all, as long as you can pay.

Within two episodes of Altered Carbon, protagonist Takeshi Kovacs befriends a sex worker named Alice to gain some knowledge about the case he is investigating, just for her to die once he has the information he needs. Alice is never seen in the show again and never given any real moment of mourning. Sex workers are the ones who experience violence and death because, due to their work, there is no regard for them as complex human beings.

The series revolves around the idea that bodies are just a fleshy host for a human consciousness stored on a futuristic disc that can be removed, and yet I don’t recall seeing people doing extreme sports to the point of body death, or having their bodies used in violent ways as the sex workers do. Their bodies, and the consciousnesses within, just don’t matter enough to be valued or have their deaths investigated.

Sci-fi often relies on the concept of improved bodies, whether it’s cybernetic body mods or completely fake robotic bodies. This brings up the idea of female androids, known as gynoids, being made specifically to fulfill a male fantasy, as Rachael was in Blade Runner. Rachael was made by Tyrell, the creator of the machines, to provide companionship and to test how they develop with false memories. The gynoid comes up often in sci-fi; the first appearance can be found in Metropolis, a film from 1927 where a robot is given skin so she can replicate a human and work as an exotic dancer. Since then gynoids have been used in sci-fi to be the perfect woman, submissive and ready for sex at all times.

Androids, such as Data from Star Trek, are seen accomplishing hard goals, completing tasks that are difficult for humans, and furthering their careers. They are created to do what man can do and surpass them. They are expected to learn the meaning of being human and reflect back important truths for humanity. Gynoids are made to be used, to be tested, to see how far they can be pushed and broken. When Data makes a daughter, Lal, she is put through a series of tests until her brain literally breaks down like any other machine on the ship and subsequently dies all within one episode.

Within sci-fi works there is an implication of legality for sex work. The protagonists are law enforcement or law adjacent, some kind of voice of reason and a moral compass for the viewer. Yet they never care much about the sex workers and their working conditions. Their main concerns with the businesses revolve around the owners’ other shady side gigs rather than the violence the sex workers are experiencing. It informs the world-building narrative on how sex work is viewed within these so-called radical futures.

It’s an acceptable career, with people of many genders and races working within it. However, it is intrinsically accepted that they will experience violence and no one will do anything to stop it. But they aren’t owed respect for this job, they are disregarded and murdered constantly, and the protagonists—as well as other characters—don’t bat an eye at another dead sex worker.

Framing these bodies—these sex workers—in this way shows that, despite being advanced in technology, the future still remains incredibly bleak when it comes to sex worker rights. There is no care or consideration despite the generally perceived acceptance of the career. Which begs the question: if sex work is legal, why are there no protections? There are some burly men around the doors of the sex clubs preventing weapons from getting inside, but nothing to prevent sex workers being murdered. There do not seem to be any laws to fall back on to create safety, no defense systems beyond the doormen, nothing they can fall back on for help. Where are the alarm buttons? The safety weapons for the workers? The harsh punishments for clients who injure workers?

Consider for a moment Inara Serra, Firefly’s (2002) resident companion. Within the Firefly universe, sex work is presented as an honourable and enjoyable trade. Oftentimes throughout the series, ship engineer Kaylee Frye refers to the job as exciting and glamorous, even fantasizes about the opportunity to do the same work and hangs out with Inara to learn more about how the position works. We see her carefully screening potential clients, only picking those she wishes to spend time with. When a client threatens Inara, she quickly makes it clear that he will not have access to her or any other sex worker again. She has respect and standing both among the crew and in any society they visit, and she uses this to get the crew out of rough situations.

People respect Inara and the work she does; she has defenses and can have bad clients banned so they can’t see another sex worker again. This setting provides sex work legitimacy, safeties, respect, and schooling. There is a sea of sci-fi that takes influence from Firefly in other ways, yet it seems no others have ever wanted to utilize the concept that sex workers may at some point be considered worth protecting and even admiring.

Why have there been so few works that have bothered with an apparently all-too-radical idea that sex workers are, in fact, people and deserve to have rights, security, and safety in their trade?

Present-day sex workers are fighting for decriminalization, for safety, for protections—why can’t we see these things existing in these works? We’ve become so complacent in the idea that sex work is something that deserves aggression, violence, and even death, that even in these so-called advanced futures we can’t imagine otherwise. We still see sex workers as disposable because it is the easiest way to see them.

Without complexity, without stories and lives, just another plot device that is killed to give the main character reason and purpose.