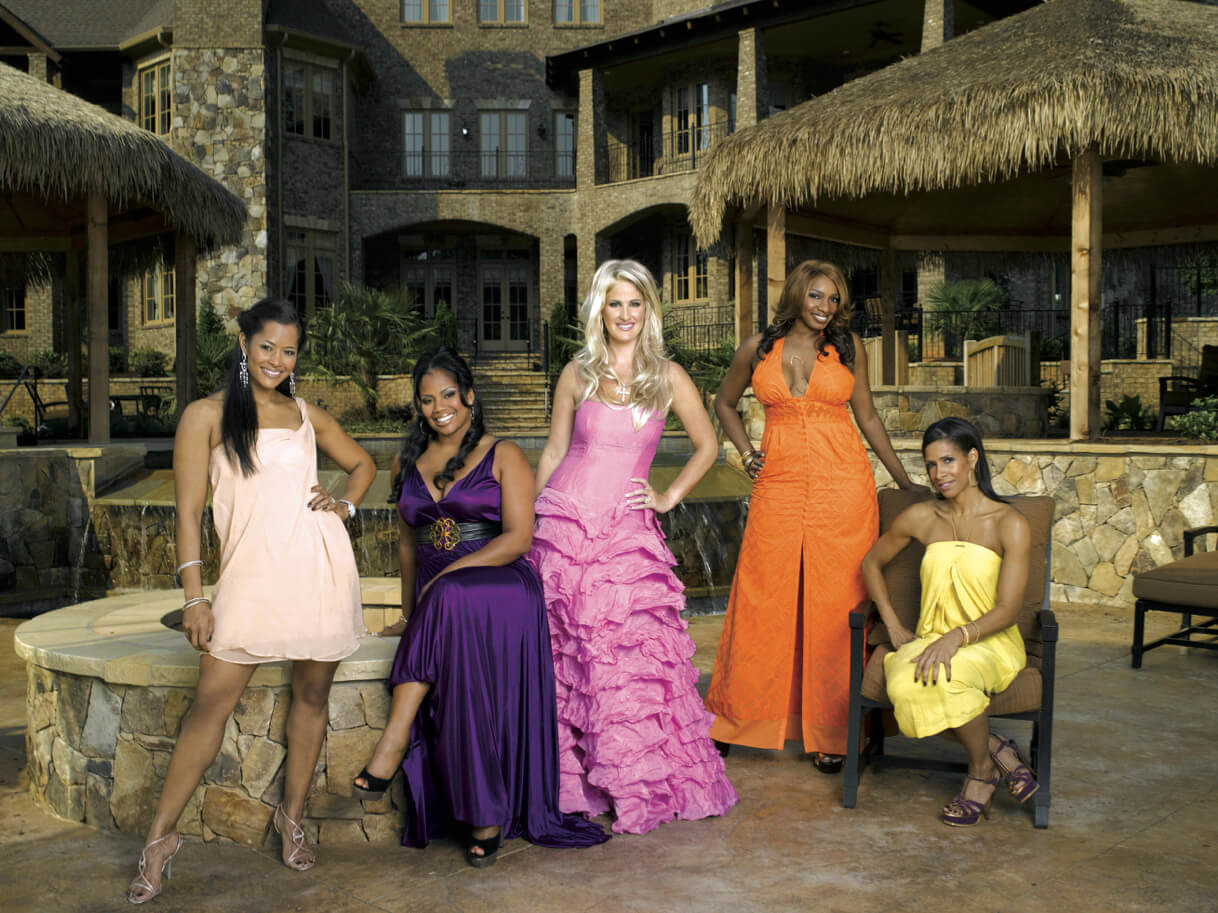 In its 15 years on television, here is a mere sample of the delicious moments Bravo’s Real Housewives franchise has come to be known for: New York housewife Aviva Drescher pulling off her prosthetic leg and throwing it across a room while shouting, “The only thing that is artificial or fake about me is this!”; New Jersey housewife Teresa Giudice viciously flipping a table during a fight; New York’s Kelly Bensimon having a meltdown while on vacation with the other women while claiming fellow housewife Bethenny Frankel was conspiring to kill her; New Jersey husbands Joe Giudice and Joe Gorga tackling each other after one called the other’s wife “scum,” inadvertently revealing Gorga’s spray-on hair; Atlanta’s NeNe Leakes tearing a producer’s shirt and allegedly choking him during a party; and Frankel having a nervous breakdown declaring “Life is not a cabaret.” Honestly, for those of us who follow these women like a religion, it just might be.

Which also makes it all the more difficult to convince non-believers that the franchise is as ground-breaking and feminist television as, say, Big Little Lies or Broad City. Spanning 10 instalments (minus spin-offs and international iterations), including Orange County, New York, Atlanta, Beverly Hills, and Potomac, The Real Housewives is an undeniable institution. Still, it’s never managed to shake off the labels—“toxic,” “trash”—stamped onto it by those who have likely not seen more than a single episode (if that) and have a habit of convulsing at the sounds of women talking.

There is an explanation for this, the same one that has been trumpeted about since reality television found its footing in the early 1990s and into the 2000s, with MTV’s The Real World and CBS’s Survivor. Unlike crime procedurals, sitcoms, or drama, reality TV shows are often assumed to lack substance in favour of the superficial. Such is the stamp slapped onto much of anything in the pop culture world, which has long been trapped inside a limiting gender binary: anything of prestige lives in the masculine, while anything that deals in celebrity lives in the feminine. Reality TV, then, has been sanctioned a feminized property, to be consumed only by women and gay men. (It’s no coincidence, by the way, that those are two marginalized demographics.) While sports—reality’s closest counterpart within the binary—are for straight cis men; sweat, endurance, ass-slapping, and all.

In an interview, Kristen Warner, associate professor of journalism and creative media at the University of Alabama, says the need to make this distinction is rooted in the world of soap operas and melodrama, which are also sanctioned as belonging to women due to their “exaggerated” tone. She says, “There’s a general implicit disdain for work that targets women because it is often thought of as hysterical and emotional. Real Housewives caters to connections about community, women’s relationships with each other, with men, and their children, so it is always clicking toward that genre convention, which creates those responses. God forbid we think about all the things that women on these shows go through as something that can be teachable and valuable.”

Consider, for example, The Sopranos’ Tony Soprano, Mad Men’s Don Draper, and Breaking Bad’s Walter White, all of whom are beloved and admired for being bad men with broken hearts, who are forgiven for breaking the rules and tossing ethics out every window they pass by. Outside their tried and true demographic, these housewives are rarely granted such a read, despite redefining the concept of what a “housewife” is. These are women who have been through it all—domestic abuse, suicide, bankruptcy, infidelity, motherhood, divorce—and have built their own businesses, are raising daughters as single mothers, and are of an age well past their prime if it were up to any other television network.

But, while we place Soprano, Draper, and White on a pedestal for committing murder, assault, adultery, extortion, and money laundering, to name a few, we write off the housewives for flipping tables, throwing punches, and yanking wigs. These criticisms, by the way, come before the assessment of some of these women’s more recent indiscretions, which fall directly into Soprano, Draper, and White territory, with Salt Lake City housewife Jen Shah’s fraud allegations, Beverly Hills housewife Erika Jayne’s embezzlement allegations, and New Jersey housewife Teresa Giudice’s 2015 jailing for mail, wire, and bankruptcy fraud, which also led to her husband’s deportation. Soprano is cackling in his television grave.

It’s a blurring of the lines even noted feminist Gloria Steinem can’t get behind, having said on Bravo’s Watch What Happens Live to the franchise’s creator and super-producer Andy Cohen himself, in 2013, that “[the series] is women—all dressed up and inflated and plastic surgeried and false bosomed … it is a minstrel show for women.” And while there is no mistaking that they can be brash, tacky ($25,000 for a pair of sunglasses!), and oh so ear-piercingly loud, and their choices offensive (supporting a husband faking cancer!), it’s also ignorant to say they are only this. For 15 years, these women have lived their lives on screen, experiencing the greatest heartbreak—from their partners’ deaths to their children moving out and on—and have showcased the powerful bond of lifelong friendships at an older age like no other television series has since Sex and the City. There is bad, certainly, but there is also tremendous good that comes with a side of laughter.

Just a few months after Steinem said those words, fellow (bad) feminist Roxane Gay appeared on the same show, disagreeing and saying, “I think that the Real Housewives franchises allow women to be their truest selves. We see the mess, we see their amazing friendships, and everything in between. When women are allowed to be their fullest selves, [it is] the most feminist thing we can do.” Because it carries so much weight, we tend to forget that feminism is just that simple, and is rooted in granting women complexity. Unfortunately, the screen rarely allows for anything other than good or evil when it comes to women, but that middle ground is exactly where Bravo has built a home.

That density is what makes these women real and relatable. That’s because the focus is not—despite how it may seem to the outsider—on appearance, wealth, and class. In fact, those are really only thin veneers for the stories within, which include everything from Frankel’s rising up from selling cupcakes in grocery store aisles to building a million-dollar lifestyle empire, to Sonja Morgan’s money pit mansion that exudes old money on the outside, but is falling apart on the inside, steeping her in debt, a broken family, depression and alcoholism. As writer Brian Moylan puts it in his book The Housewives: The Real Story Behind The Real Housewives, “There is a critique or counterbalance for just about everything somewhere in the great Bravo oeuvre.” It regularly reminds us that, as New York housewife Luann de Lesseps once sang, “money can’t buy you class”—or happiness.

And it’s those melodramatic moments where they say and do exactly what they want to that might be the strongest connective tissue between housewife and fan. As Warner explains, “that is the thing that brings us out of the didactic of good or bad and into the catharsis that these shows offer us as women who were raised and/or are stuck and abiding by certain ideologies.” In a sense, then, Real Housewives has no space for society’s growing love of respectability politics, which have never favoured the marginalized.

As yet another noted feminist, Camille Paglia, said during a talk at the Skirball Cultural Center in 2012, this franchise shows “the authentic ferocious energies of female sexuality” and, in this singular endeavour, functions as “anthropological documents” that make us more media literate through our consumption not only of the shows, but their cast reunions, aftershow, social media chatter, and the buzzing group chats where we dissect every moment and go over what we might have done, what we hope happens, and who we’re rooting for. As Moylan writes, “Since many Real Housewives aficionados hold all these events in their heads at the same time, it becomes possible to interpret the world through a million lenses at once.”

Another way in which The Real Housewives has long been strutting ahead of the rest of television is the way in which it features entirely Black casts, in the cases of The Real Housewives of Atlanta and of Potomac. Although the former has been one of the network’s highest rated instalments since it began in 2008, it’s also proved divisive, with many criticizing the franchise for showcasing now infamous moments when the women have physically lashed out at each other, perpetuating stereotypes of the “angry Black woman.” For Warner, though, this goes back to “the shame of complex women.” To begin with, there is an incredible dearth of Black women characters on screen, and The Real Housewives has provided a space that is not exclusive to “the Olivia Popes who are pedigreed and have educations, we’re talking Black women in everyday life who never really get seen, who have children, who may not have all the education, but do have street savvy, compelling personalities and interesting stories.”

Certainly, and particularly in the case of the franchise’s other instalments, there is still much work to be done in terms of representation. But, says Warner, when it comes to believing that these women might hinder us from future progress, “the reality is that if you think … Black women are loud, violent, or hypersexual, that’s because you’ve been conditioned into thinking it’s an accurate stereotype. And then it doesn’t matter how many degrees or how much money that housewife has if her getting upset can destroy all progress…. We blame them for perpetuating stereotypes when there’s no correlation to the causation; these things are happening because of how we are hierarchically represented in the world.” In other words, the Real Housewives are not making or breaking any of these stereotypes, but they are offering a spectrum of Black women a platform.

And, in doing so, building on that lively community of otherwise marginalized viewers who congregate several days a week to discuss the various instalments airing at each time, who take great pleasure in seeing powerful, shameless women do, say, and act the way they want in ways we can’t or aspire to.

One might even say, with their individual taglines, the series’ quick cuts and reaction shots, confessionals and gif-ability, The Real Housewives has long operated as a kind of televised comic book, reshaping another genre that has never “belonged” to us. Why, then, can’t we consider these women a special kind of superhero, who has carved her own space for her very own matriarchy? Clownery included.