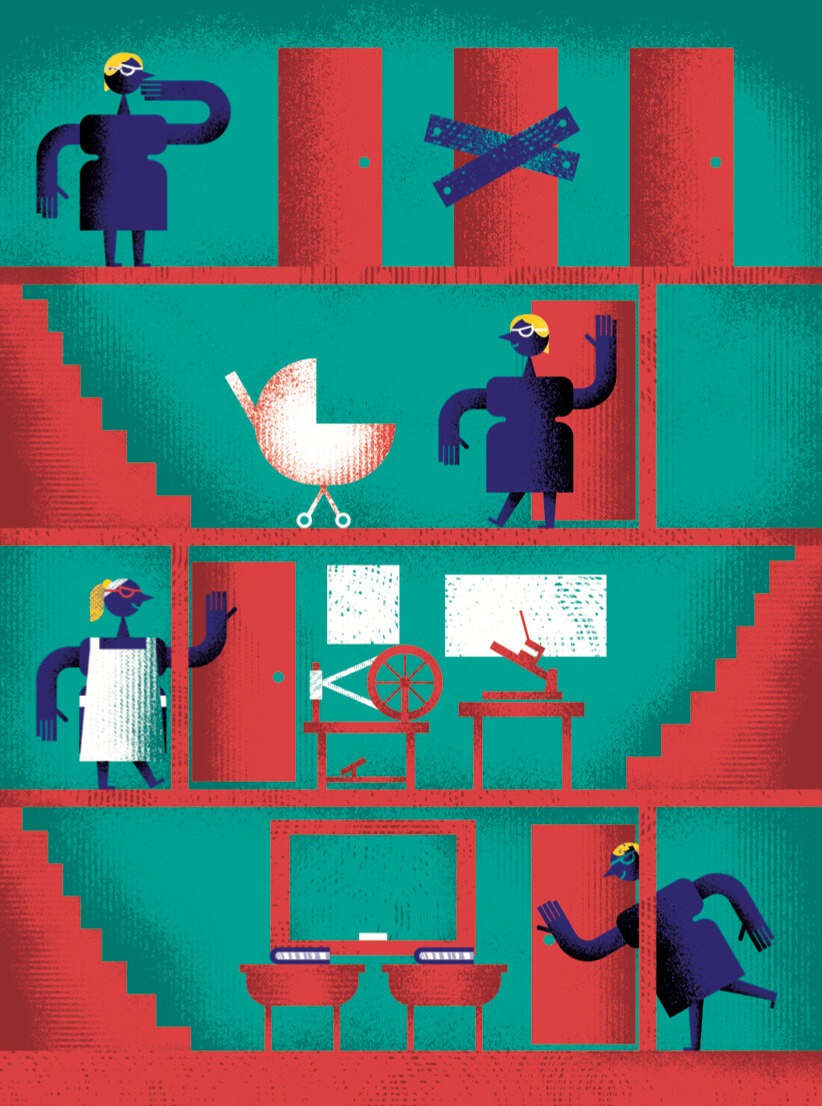 My first grown-up job paid $33 an hour, in 1987. It didn’t truly pay $33 an hour, because it was a teaching job, and the rate didn’t include lesson planning. It was also very part-time. But fresh out of university, I thought this was astonishingly generous compensation. I got the job through the (former) Labour Council of Metropolitan Toronto because I was an exuberant leftist with impeccable grammar. I have never earned that much since, with the exception of the odd consulting gig.

That very cool job teaching workplace ESL and literacy started me down a path that led to some very interesting places. I was an educated white woman with choices, so I chose jobs that I felt had the greatest impact on the issues and communities I cared about. I had the luxury of being able to uphold my political ideals in the workplace. I got involved in popular education and theatre, grassroots storytelling, museum accessibility, and feminist history, moving laterally with the winds of policy change. But I had an unerring ability to take on positions that would cease to exist after the next federal or provincial election.

Until the turn of the millennium, I got every job I really wanted. Not-for-profit jobs were plentiful back then, when governments of different levels and leanings took their responsibilities to their citizens more seriously. Public money was available to at least plug some of the gaps between the rich and the poor, if not address systemic inequality. But these jobs were never secure, because they always depended on project grants. I was naively shocked by my first layoff. I was the sole employee of a unique little nonprofit that had developed practical and successful training tools for adult basic education. I was travelling around the country delivering workshops for which demand was steadily growing. The work was fully funded through a cost-share agreement between the province and the feds (incredible but true), and after four years, they simply cut it off. It sounds absurd now, but the organization’s board and I hadn’t needed supplemental funds from other sources, so we’d put all our energy into programming rather than fundraising. When the work came to a complete stop, I boxed everything up and sent it to an archive.

I was deeply disappointed, but I was young and rolled with it. Within a few months, I was offered my dream job as executive director of a workers’ arts and heritage centre.

Then Mike Harris and his cronies began the task of obliterating every last shred of humanity from Ontario’s arts, education, health, and social service sectors. I hung on for five years before being laid off a second time. It took dozens of interviews during the summer of 2000 before I landed my next job. I had the misfortune of being laid off twice more before I was 40, at which point I was burned out and, in a curious career non sequitur, took up teaching Pilates.

Soon bored with abdominal curls, I was lured back into a not-for-profit job that was so useful to Canadian women, I thought it would surely last me until retirement. Its mandate was to raise funds on behalf of more than a dozen national feminist organizations doing work ranging from prison reform to apprenticeship training, saving each the time and effort of going after the same pool of donors. Then Stephen Harper took office and reduced Status of Women Canada to rubble, closing regional offices, slashing research and support for women’s equality, and even erasing the word “equality” from its mandate. Hello, layoff number five.

I decided to go into business for myself, reasoning that the precarity couldn’t be any worse. For five years, I sank all of my resources—financial, mental, and emotional—into selling locally, sustainably handmade goods and offering craft workshops. I brought in artists to teach everything from bookbinding and screenprinting to spinning and weaving. It fulfilled my own lifelong passion for hand-making. I was surrounded by beauty and creativity every day. The business was a joy and it made a difference to some of my artists’ bottom line, but left me with more capital losses than I’ll ever be able to claim on my taxes. A lot of people treated my place like a public art gallery, while continuing to shop online or at chain stores. When I had a mediocre holiday season in 2013, I had to concede defeat and close my studio and shop. I came away rich in human assets, but entirely unencumbered by investments or real estate.

My peers warned me that being over 50 would render me unemployable, but I didn’t believe it until 200 resumes garnered me two or three interviews during all of 2014. Nobody wanted an executive director of my age, and nobody believed I’d happily settle for any role beneath that. It didn’t help that the kind of work I’d been doing in the 1980s and 1990s barely existed anymore, social services and the arts having gradually fallen victim to leaner and meaner governments. Few of the organizations I’d been involved with had survived. It felt like the fruits of all my labour had vanished without a trace.

For the past seven years, I’ve done an array of random jobs, from writing mercilessly upbeat schlock for a local paper to selling cheese at farmers’ markets. At one point, I had to go on welfare, which covered less than half of my Toronto rent. The other half, and groceries, came from my credit cards—a situation which inevitably came back to bite me. When I remarked to my Service Ontario rep that the positions I had previously held all required a master’s degree now, she cheerfully suggested I accrue massive debt to go back to university, as if this would make me more employable at 60.

The only position for which I was highly desirable was a nanny. Turns out everybody wants a mature, progressive, lesbian to mind their kids. It started accidentally, when I agreed to look after the children of friends. I was good at it. How would I describe my qualifications for this role? I’m nurturing, gentle, and squishy for cuddling. With age, I’ve become patient and unflappable. Once, I would have said my top skills were leadership and efficiency. Now I can boast about perfect playdough and aesthetically pleasing snow castles.

Childcare is an unhappy combination of exhausting and boring. But toddlers are super weird, so I found it entertaining enough to keep me going until COVID-19 hit. I did pretty well for an old broad, sustaining only one injury when I collided with a bus … of the Fisher-Price variety. Luckily, I was working above board and paying into EI, which I can now collect. But I am actively plotting a post-pandemic career change, because my body is eventually going to limit my schlepping and hoisting of children. I’ve got my first book coming out this fall, and am pinning my hopes on some modest arts council grants, so I can eke out a living as a somewhat aged emerging writer.

During the large swaths of time I have had to let my mind wander during the past year, I have thought about how I was part of the gig economy before it even had a name. I had health benefits for much of my career, which was a lifesaver when I was a single parent, but I never had a pension, so I am facing an austere lifestyle in my dotage. I’m accustomed to impecunity, so I expect the transition will not be too jarring. Fortunately, I’ve got a grown daughter who likes me, so I will never be left out in the cold. I expect I’ll be at the forefront of co-housing innovations with family or single friends, just as I was ahead of the precarity curve.

Many in my circle share my circumstances. A few friends are among what might be the last of the career civil servants, so they’ll retire comfortably. A handful have pensions from other public sector or union jobs. But most are artists of one kind or another. For us, 65 will be just another birthday, retirement a meaningless concept from a recent but bygone era. It’s scary, but at least we’ll be dead before old age security runs dry. A lot of us were temporarily rescued by the federal coronavirus relief benefits; it was a comfort to know for certain where our next 2,000 dollars were coming from.

Gigging uncertainly toward my golden years, it’s hard to resist regret. I always maintained the illusion that I was contributing to something bigger, even if it felt like I was pushing a boulder uphill much of the time.

In retrospect, I know I had an impact on some individual people, if not the systems that held them back. I was born with a great deal of race and class privilege, and my goal was to spread it around, not to squander it. I could have had one of those jobs-for-life before they went extinct, if I had just been less political and impatient, and more risk-averse and compromising. On the other hand, I recently reconnected with a friend I hadn’t seen in over 20 years. She said, “You never sold out!” That and a toonie will get me a cup of coffee, but it means a lot, just the same.