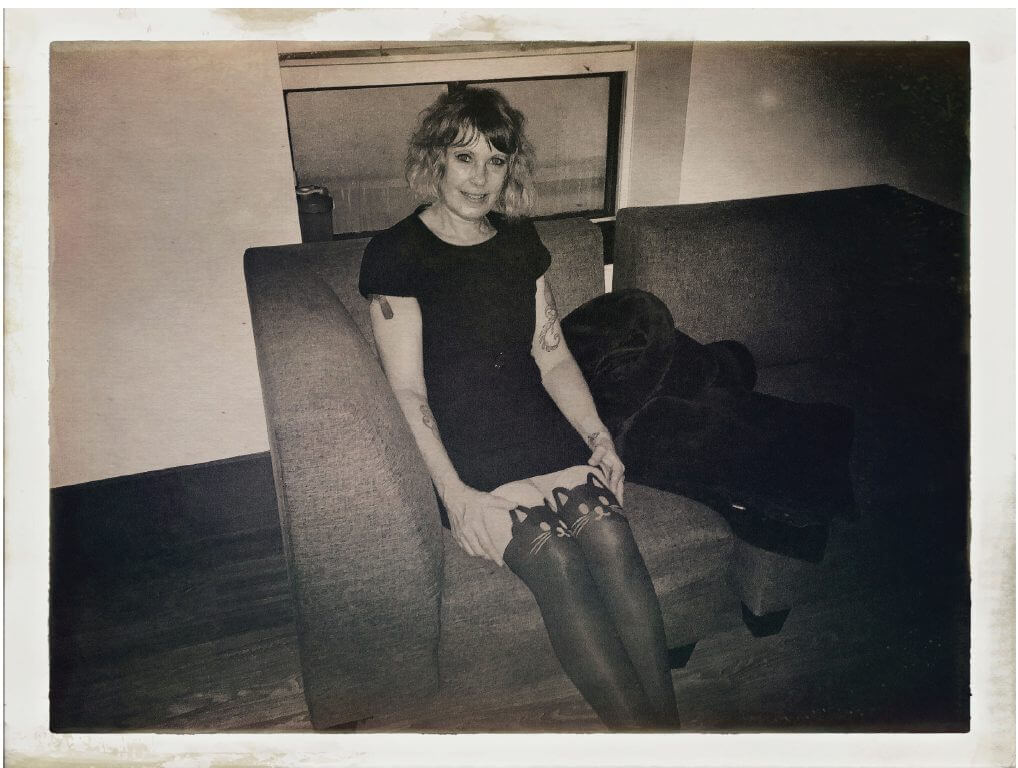 Picture me sitting on a couch in chartreuse satin pajamas with turquoise embroidery stitched on the seams. The satin feels cool and slippery when I shift to move my computer onto my crossed legs to begin writing. I’ve pinned a big pink button over the place on the body we associate with the heart. The pin says, “Don’t cramp my style.”

I’m an older woman and I’m being regulated to perform it in a way that satisfies social norms about fading away. If I behave too boldly in my choice of colours—or in my willingness to expose my aging body to view—I invite comments that remind me of how outrageous that is. The comments aren’t always negative, but ultimately they serve to make me self-conscious about my appearance and pressured to be more careful about the choices I make. People talk about feeling invisible when they get older; I feel like there’s lots of pressure to pull that disappearing act off.

I’ve been looking away and through too. But older people are suddenly more visible to me and I love it. I’m seeing aging faces in a full blown light: as beautiful and ephemeral as dandelions gone to seed inviting wishes.

When I was a teenager in the mid-seventies I favoured big overalls, high-top running shoes, and short faux fur jackets. One day, I went to the mall with my mother and we found a sleeveless mini dress she loved. In my memory, the dress invoked her crayon strip of blue sky personality with a great yellow strobing sun in the centre. We came home and she put it on to show my father. He looked disapproving when she spun in front of him. “It’s not matronly enough,” he said.

Matronly. I’d never heard it used this way before—as a fashion choice someone should aim for. It conjured up images of a grim Nurse Ratched in One Flew Over the Cuckoo’s Nest. But I knew what was going on. My mother, who would have been in her mid-forties at the time, was being checked for her aspirations. She was being told she needed to know her place as an older (married) woman and that she was to dress in an understated, unsexed regulation uniform that indicated modesty and a willingness to fade out.

I’m 62 years old now and the image of “the matron” is a spectre that haunts me. Mostly, I have a sense that I still just don’t get it. At my friend’s cottage in the country, I climb naked on an outcrop of rock that’s dressed in spongy sea-green moss and I feel variegated. Decorated. Complicated. Back at home in the city, I look down at exposed forearms and feel disconcerted to see ink blots of age spots.

What do people see? Who have I become?

Many people seem eager to enlighten me. A few years ago I was in New York on a hot sunny June day, a little lost and wandering the streets looking for an entrance to the subway. I’d been to an exhibit at the Guggenheim that had thrilled me.
I was a little achy and tired, wearing a short creamsicle-coloured sleeveless dress with faux snakeskin wedges. I was slathered in a greasy coconut-scented sunscreen that felt a little sticky in the heat. I was excited and stimulated by the show and feeling that tug of a sense that anything is possible. I felt young.

Then I heard a man call out, “Wow! Even Granny has tattoos!”

At first, I didn’t know he was talking about me. Then I realized that of course he was. My arms and legs are bedecked in tattoos, I was wearing a dress that made them visible, and as he had reminded me: I’m older. I turned around and laughed and said, “Damn right!” Then I asked him for directions to the nearest train station.

He was sheepish. Apologetic. He called me ma’am and pointed the way. I immediately knew what had happened. He’d seen me coming from a distance, read my tattoos and my heels as a kind of sexual availability, and then realized as I got closer that he’d made a mistake. That embarrassed him. He’d been attracted to an old granny!

Back in Toronto, I decided to dye my hair blue. When people started smiling at me on the street, I assumed it was a good thing. They were friendly smiles, grins, thumbs up. One man stopped me on the street to say, “You look great!”

“Thanks,” I said. I’m embarrassed to admit I was flattered.

“Let me explain,” he went on, and I felt a sinking feeling. “Most women your age wouldn’t have the courage to dye
their hair like you have. It’s great that you feel free. Keep
feeling free!”

I felt less free and I knew that part of what inspired his explanation was his desire to distance himself from the possibility of being perceived as attracted to an older woman. I also felt keenly patronized—a hazard for older people, for whom the designation “cute” has a whole new and annoying meaning.

Women regulate me too, but it’s subtler. A couple of years ago a woman who looked thirty-something rushed up to me after a performance in a queer space that I thought had gone well. “I want to be just like you in 20 years!” she cried. I felt compelled to take it as a compliment. I looked down at the shimmering silver oxfords I was wearing that night and knocked my heels together. When they catch the light, they’re rainbow coloured. Then I looked back up and said, “Thank you.” I knew the younger woman meant well, but I wanted, somehow, to just be who I am and not some example of aging to strive for.

Recently a friend of mine wrote to counsel me about how I should perform my age. She’s in her early forties now and said in her email that she knows that she’ll eventually have to cope with (more) wrinkles and other changes, and that the thought scares her. She wants me—needs me, she says—to be an example of someone who embraces my age with attitude. Ideally, I can be the badass she’s looking for. I don’t know how I feel about her request. Pep talks from younger folks are awkward. They’re a little humiliating.

If life is a casting off—if aging is a letting go—can’t that be a good thing? My East Coast mother let my sisters and I run around with our shirts off on hot days. She kept our hair cropped short, so it was easier to deal with. Even though I knew I was supposed to be a girl (and I admired, as it happened, dresses with smocks and long hair held back with a wide headband), my other genders sang in my flat exposed chest and there was a wildness there. Once I hit adolescence, which was 11 years old for me, my pointed nipples under clinging knit sweaters and see-through cotton blouses (ideally with billowing pirate sleeves) invited stares and comments from men on the street. “Go upstairs and put a bra on!” my mother would order me.

I was aware of being a provocation, which was exciting and powerful, but it came at the cost of self-consciousness. When I was a child my nakedness was a source of delight, and I felt like I owned it. Maybe there’s a way to win this sensibility back now that I’m older—a space opening up to redefine what sexy means—and take it away from the idea of it being contingent on someone else’s interest. I’m conscious of coming to this project late, of having aged into it. Many other people have already been working on it.

Despite my reaction to being called on to be an inspiration, I know mentors are important. A friend of mine, who’s in her mid-fifties, was travelling in Berlin years ago and she tells me she was intensely affected by an older woman she watched dismounting a motorcycle. The woman took off her helmet and ran her hands over her brush-cut hair. She was so effortlessly herself that my friend immediately crushed on her. The image of the woman sustains her and reminds her that older women can be beautiful because they’re who they are, not despite
their age.

Tonight I’m going to a private party. I’m wearing tight black jeans with a t-shirt and blue Doc Martens. My big belt buckle is glittering with blood red crystals. Time to put on Janelle Monáe’s “Tightrope” and take a spin with it. Self-possession is a bold and beautiful thing. I want to walk the streets loving all the art I see and take the stage in power. Don’t tangle with me. Don’t cramp my style.