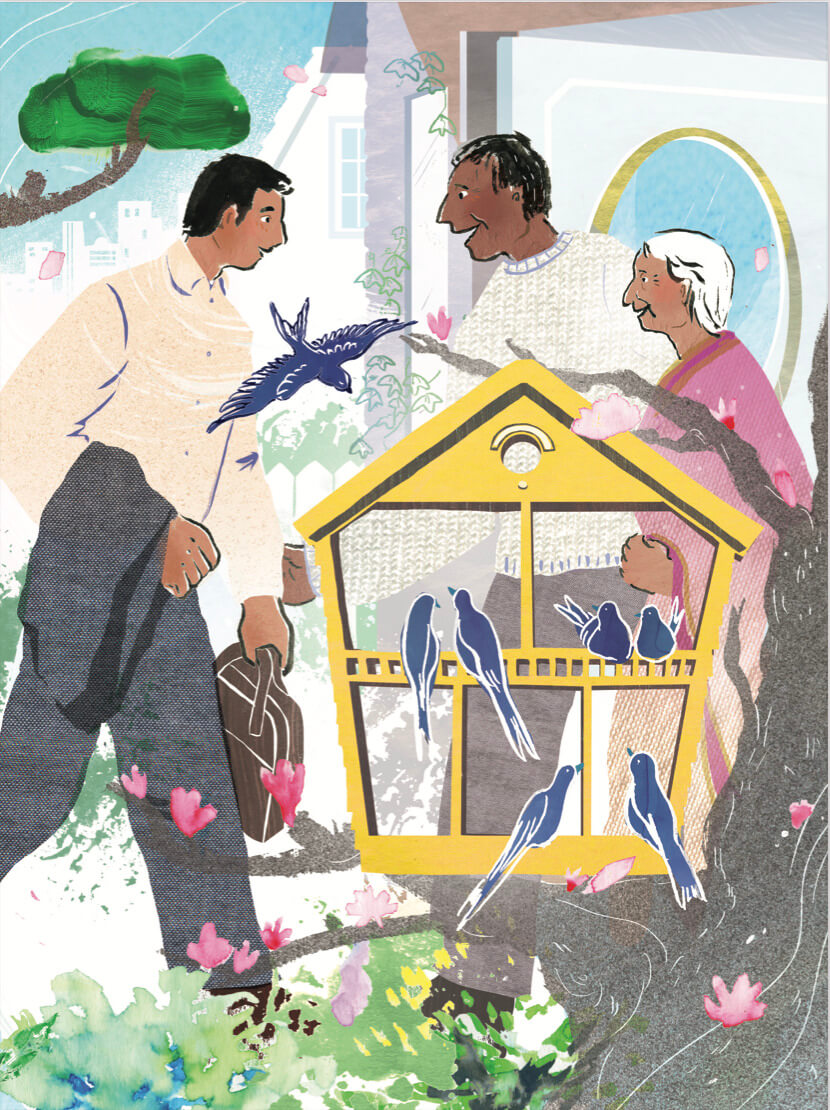 “So, where is your apartment around?” she asked me.

Even before answering, I know where this is going. She isn’t asking because of romantic interest, the subtle hint of inviting herself over. Perhaps she wants to size me up, or maybe it’s just one of those gold-standard small talk questions someone asks, similar to “what do you do?” Either way, I don’t have the answer she wants to hear. “Uhhh…. Bathurst and St. Clair,”

I cautiously respond, avoiding the fine print: that I am 33 years old, do not have an apartment, and live with my parents. I am also quite happy to.

There is a common assumption that children should move out of their parents’ home at a certain age, and failure to do so is greeted with suspicion of the family, or even judgment of one’s financial situation. (What age that is, is anybody’s guess, but anecdotally, somewhere around 25 years old.)

Historically, I have used an impressive amount of mental gymnastics to avoid the question of where I live. When cornered, and the reality of my family living arrangements are unveiled, I have what feels like a list of a politician’s talking points ready—that I am close with my parents; that we have a beautiful, spacious home in midtown Toronto, equipped with a sprawling backyard in a walkable neighbourhood; that our house is a salon for intellectual discussion, debate and humour; that I save money on Toronto’s monstrous rent, and that I maintain a sense of independence—all of which is true. If I look at my potential date and fail to notice any visible signs of persuasion, a quiet “oh” or a small nod or smile, I try to soften them by mentioning that I am “helping take care of my newborn nephew”—greatly exaggerated—a painkiller for my hard-edged, opinionated disposition.

Yet for all the motivational self-talk and reasonable arguments, the stigma prevails. Hollywood star Michael B. Jordan was shamed online for admitting that at age 32, he lived with his parents. “You get home-cooked meals,” he said, and cited his love and admiration for his parents. Even then, he was defensive about his choices, saying he planned to move out as soon as he could. (In 2020 it was reported that Jordan has since moved out of his parents’ home.)

When Toronto Life shared a 30-year-old Chinese-Canadian’s story of living at home with his parents on social media, there was a barrage of negative comments. “Independence man!” one person wrote, with another adding, “what a joke. It seems like a lot of people with high income are mooching off their parents.” One person responded, “some of you aren’t immigrants and have no understanding of cultures outside of North America and it really shows,” while another commentator added, “I knew a lot of people who COULD have lived at home and saved, but they chose to move out.” Reading through the commentators’ names, one could see a difference in cultural perspectives.

That said, the pandemic and public awareness of diversity have encouraged an openness to new perspectives, with an eye on the bank balance. Job loss, financial reasons, loneliness, or the need for daycare, have led 1.5 million Canadians—and six percent of adult children in Ontario—to move back home. This “boomerang generation” (young adults who have previously left their parents’ home, only to return) is an increasing trend in Canada and the U.S., bolstered by multiple economic crises in the past few decades, a weak labour market, and student debt. “It is definitely not where I thought I’d be at this stage in my life,” 24-year-old Elsa Anschuetz told American news website Axios in an interview, but it “is definitely better than living in an apartment alone during this crazy pandemic.”

For many ethnic Canadians—including within my own Indian heritage—it is unusual, even abnormal, to move out before marriage. While financial status tends to be a chief motivator for adult children to remain at home, the number of adults living with their parents doubled between 1995 and 2017, according to Statistics Canada in 2017, 21 percent of South Asians and 19 percent of Chinese Canadians aged 25 to 64 lived at home, compared with nine percent of the total Canadian population aged 25 to 64. These groups may have cultures which value intergenerational living arrangements.

Seven years ago, my sense of individualism was publicly questioned. Appearing on The Agenda with Steve Paikin, a public affairs show on TVO where I spoke about the millennial generation and the labour market, I mentioned that at 26 years old, I lived at home with my parents. “It wasn’t your first choice or wasn’t the most fabulous thing or you certainly hope to be on your own one day,” the host asked me, to which I responded that “a staple of the immigrant mentality is if you don’t need to spend the money, why spend it? If I don’t need to spend the money to, if I can afford to, live at my parents in downtown Toronto, why would I live somewhere else? To prove to them I am independent?”

Yet it is precisely that last idea—independence—that is being called into question. When a relative’s husband asked my mother why her children still lived at home—didn’t she want to teach her kids independence?—she retorted that there were many ways to teach them independence.

This disconnect is a byproduct of cultural psychology, with many eastern cultures valuing a collectivist mindset, social cohesion, interdependence, and deference to elders. Krystal Ng, a 30-year-old recruitment manager in Toronto, values both family connections and a sense of financial independence. She told me that while she moved out at the age of 25, “primarily for investment reasons,” she visits her Chinese-Canadian family three times a week in Richmond Hill.

Prior to the pandemic, her colleagues asked what she was doing on the weekends, and she left them baffled when she responded that she was hanging out with her parents. “They did not understand why I would do that on a weekend. Was I doing something with them? No, just running errands and being with them.” A frequent traveller with her parents and brother, she told me that when she was 23 years old, one couple could not believe she was “still at home.”

I began to think about the intersection of culture and household structures in 2013, when I read a Toronto Star report about Punjabi-Canadians disagreeing with a townhouse developer in Brampton, Ontario, leading to a war of words between two city councillors and a resident meeting with about 500 attendees. The issue wasn’t about pricing, but architecture. “Townhomes is not our concept of buying property,” said Paramjit Singh Birdi to the Toronto Star. “Every house here has two or three families. The Punjabi community lives in joint families and no joint family can fit in a townhouse.”

Despite the suburban desire for a single-family home with a white picket fence and 2.3 children, much of the world—from Africa to the Arab Gulf, and especially in South Asia—live in joint families, which extends beyond the nuclear family “and it typically grows when children of one sex do not leave their parents’ home at marriage but bring their spouses to live with them,” notes the Encyclopaedia Britannica.

I saw this phenomenon close-up, when shortly after meeting my aforementioned GPS-inquisitive date, I moved to Mumbai for work. My newly married-friend, an Ivy League-educated family business owner, who lives with his wife, parents and grandmother, told me that it was important to him to be close to his grandparents. He also noted the ease of lifestyle in coalescing resources together—maids, drivers, and cooks.

From 2001 to 2011, joint families in urban India grew by 29 percent with even the vice president of India advocating for them in a national newspaper. “Indian joint families are considered to be strong, stable, close, resilient and enduring with focus on family integrity, family loyalty, and family unity at expense of individuality, freedom of choice, privacy and personal space,” write psychiatrists Rakesh K. Chadda and Koushik Sinha Deb in the Indian Journal of Psychiatry.

Bollywood films have featured joint families, and superstar Amitabh Bachchan found his joint family “most enjoyable” and “entertaining,” with the patriarch living with his wife, his son Abhishek and daughter-in-law Aishwarya Rai Bachchan, a former Miss World winner. When Oprah Winfrey asked in a 2009 interview how Abhishek lives with his family, he turned the question around asking if Oprah lives with her family, “How does that work?” to which the audience roared. “We’re a different culture where we are trying to get the parents outside of the house,” Oprah added. “In many parts of the world … that is not normal. It’s normal to bring the parents in, to have respect for the elders.”

It’s easy to consider joint families as relics of a different world and adverse to Canadian values of individualism and self-reliance. But even the pandemic’s economic instability has not changed Canadians opinions of inclusiveness, with our country amongst the highest in the world in valuing immigrants. If we are to go beyond a superficial dance-dress-and-dining multiculturalism, we’ll realize that, according to Statistics Canada, as of 2016 six percent of Canadians live in a multigenerational household (of at least three generations), and it is one the fastest-growing demographics. Urban policy writer Diana Lind wrote in the Globe and Mail: “We have codified and glorified the stand-alone home with a white picket fence. We have praised the price appreciation that comes with home ownership, ignoring the increasing percentage of non-homeowners who bear the brunt of rising property values. We have endorsed the aspirations of privacy, space and exclusivity without a strong countervailing public discussion about the downsides of this lifestyle: increased carbon emissions owing to greater dependence on cars; loneliness and obesity owing to less social interaction and fewer walkable neighbourhoods; and class and racial segregation.”

She adds that we have innovated in all forms of life, from ride-hailing apps to the gig economy, but our view of housing “feels stuck in that postwar period.” Just as the pandemic has made us rethink ideas like working from home, visiting overlooked parks, and even the purpose of shopping, surely we can reconsider alternative arrangements?

“My family friend lives in a gorgeous and leafy neighbourhood in Johannesburg, and the parents along with six friends bought a piece of land in the city, and developed six beautiful houses with lots of light and a shared garden and pool,” a former colleague told me. He informed me that they’re “not hippies,” but are affluent economists and architects, adept at living on their own. “It’s a modern kibbutz,” he said, referring to the traditional Israeli collective community based on agriculture. Far from the hippie branding, wohngemeinschaft (or communal living) is common in Berlin, even making way for more upscale cohousing projects, in which an architect facilitates discussions between developers and residents.

After four years of living alone in Mumbai, I recently moved back to my parents’ home in Toronto. Tolerating differences was always going to be an adjustment, but I began to see my parents differently. Long-term care had been frequently in the news for COVID-19 outbreaks, but I pondered how so many children could leave their parents in their wisest years to slowly fade away?

Not every family has the capacity to live together, but many of our modern urban crises—loneliness, burdensome financial obligations—including exorbitant rent—ageism, childcare, and even interpersonal intolerance and imprudence—could be alleviated through different ways of living. It has taken us a pandemic to rethink; what will it take for us to take action?