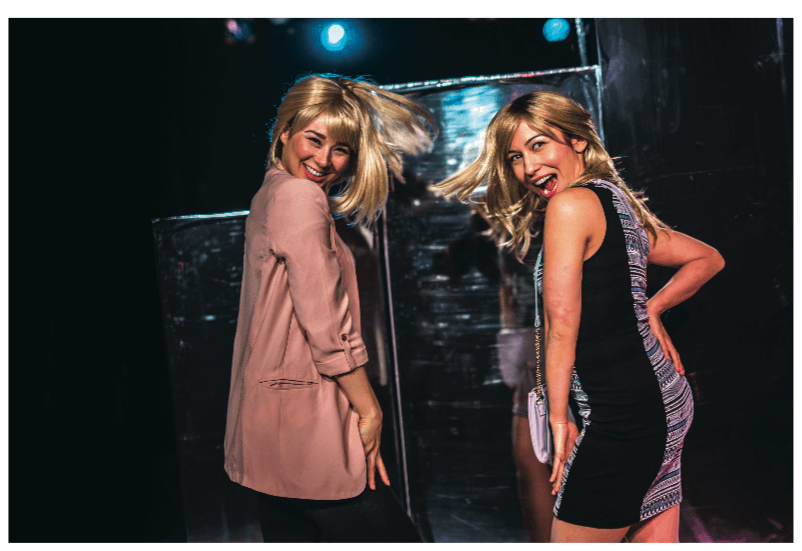 Kenneth Tynan’s natural hair colour is a warm auburn, the kind that changes with the seasons and reveals copper undertones when it catches the light. He gets it from his mother, an Irish immigrant. He says he’s always liked his hair, but when he dyed it jet black, he tried not to get emotional about it.

“I tried to view it as a business transaction,” Tynan says. As a young actor in Vancouver, image has a major impact on the opportunities that he can access. With red hair and a pale complexion, he’s predominantly called in for Caucasian roles; roles that he’ll take on but that aren’t always fulfilling. Tynan is mixed-race. His father is second-generation Chinese-Canadian and Tynan identifies with both sides of his heritage. However, this isn’t easily communicated through a headshot. Tired of being overlooked for culturally relevant roles, he resolved to dye his hair in the hopes of appearing “more Asian.”

Tynan has grown accustomed to people assuming that he is white, forcing him to disclose and defend his Asian heritage. Now, these negotiations of belonging and identity inform his career too. Although the conversation around representation is ongoing, casting can still be an arbitrary process concerned with categories of colour, leaving mixed-race actors in an in-between space that they are all too familiar with.

Following the widespread success of movies like Crazy Rich Asians and Black Panther, demands for more representation in casting have grown. But authenticity still remains a low priority in the casting process, says Leanne Adachi. Adachi is the vice president of Breakdown Services, a company working out of Toronto, Vancouver, New York, and Los Angeles that helps streamline the casting process.

“Agents fill out their rosters like football coaches fill out a team,” Adachi explains. Talent agents want to ensure that they have a person who can play every ethnicity, or at least look “close enough.” In this sense, racialized actors are judged on the basis of whether or not they look the part, rather than their ability to play the part. This is where mixed-race actors in particular can run into problems: while they may have the lived experience for the roles they want to pursue, this becomes irrelevant if they don’t obviously present as the ethnicity being called for.

The other issue with casting is that the ethnic roles that are available are monolithic and grounded in stereotypes of a particular race, Adachi says. Typecasting is a pervasive issue that still runs deep in the industry. It’s also the reason that Julie Tamiko Manning, an actress from Montreal, quit auditioning for movies early in her career.

After graduating from theatre school in 1991, Manning struggled to find work. She says she was “too ethnic” for an industry that was accustomed to seeing white faces in lead roles, but also didn’t present as Asian enough for the few Asian roles available. Manning hit her breaking point when she was asked to do a stereotypical, pan-Asian accent for the role of a Korean prostitute.

“It was too traumatic,” she says. “I didn’t want to continue a career playing the cliché.”

Years later, with more acting experience on stage but a longing for creative fulfillment, Manning decided to produce the mixed-race representation she didn’t see in the industry. After combining forces with Adrienne Wong, another mixed-race actress, the two wrote Mixie and the Half-Breeds, a play exploring two women’s struggles to negotiate their Asian-Canadian heritage. It premiered in Vancouver in 2009 and most recently ran in Toronto in April 2018. Although writing the play was a vulnerable process, Manning says that she felt she had a responsibility to show other mixed-race people that they aren’t alone in their experiences.

The availability of mixed-race narratives in film and theatre has been scarce, but improving. Tessa Thompson and Ruth Negga are set to star in Passing, a film based on the 1929 novel of the same name. The story focuses on two biracial women: while both can pass for white, only one of them chooses to move through life as a white person. Netflix is working on a sequel for To All the Boys I’ve Loved Before, which features a mixed-race Korean and American family. In September, ABC premiered Mixed-ish, a prequel to its show Black-ish that explores Rainbow Johnson’s (Tracee Ellis Ross) experience growing up biracial.

Early on in his career, Ryan Singh, an Indo-Afro-Guyanese (“with a splash of other ethnicities”) actor, used to go into what he calls “advocate mode” at auditions. He found himself having to defend the authenticity of his ethnic background because his surname set an expectation with casting directors that he could not meet.

Tired of being asked how he got his last name, Singh worked under the stage name of Nigel Ryan for several years. While he still did behind-the-scenes work under Ryan Singh, the moniker allowed him to enter auditions without his surname preceding his experience. Eventually, though, he found it too difficult to continue “living as two people,” and returned to his birth name.

Singh also has firsthand experience with colourism in casting: a kind of prejudice that privileges Black people with lighter complexions over those with darker complexions. He’s been to auditions that call for people of colour but still end up casting what he calls the “comfortable” choice—someone who is mixed but more white-passing—because people aren’t as used to seeing Black people on screen outside of stereotypical roles.“As a person of colour, you’re constantly being filtered into roles,” he says. “We are one black dot on a white palette.”

Taylor Love, a Toronto-based actress whose background is European and Jamaican, is also frustrated by a narrow notion of representation in the industry. Growing up, she loved sci-fi and fantasy films like Harry Potter, Lord of the Rings, and Jurassic Park. Now in her 20s, though, she’s taken issue with the casting of these franchises.

“I look at those movies now and I’m like, there’s not a single person in this movie that looks like me, and if there is, there’s only one of them, and they die,” she says. She finds it ironic, though, that in fantasy worlds where dragons roam the skies and dinosaurs come back to life, it’s impossible to imagine that a Black person exists. To challenge this, Love will specifically go out for roles that are typically occupied by white people or have even called for white actors to audition; the kinds of leading roles she imagined herself in as a child.

She will also go out for auditions calling for Black actors, provided the role isn’t stereotypical. Recently, she acted in a short film called Tangle, which focuses on seven Black women spending an afternoon in a salon, connecting, gossiping, and discussing the challenges they face as racialized women. In the film, Love plays Beth Andrews—a woman who is fully Black, but often gets mistaken for biracial.

At first, Love felt uncomfortable in the role. On the one hand, she moves through life as a Black person. She compares it to the one-drop rule, a notion developed during segregation in the United States dictating that one drop of Black blood categorizes a person as Black, regardless of physical appearance. Since she presents as Black, she is treated as a Black person, regardless of her heritage. Nonetheless, she feared that her casting was taking an opportunity away from another actor that is fully Black. She questioned whether or not she “deserved” the role, even asking the director of Tangle whether or not she was comfortable casting a mixed-race person in her role.

Love’s concerns arise from an acknowledgement that by Hollywood’s standards of colourism, she would have easier access to parts than other Black actresses. Previously the industry has been criticized for exclusively casting actresses with lighter complexions in roles calling for Black girls. Amandla Stenberg, for example, faced criticism for their casting in the film adaptation of The Hate U Give. Debra Cartwright, who illustrated the cover of the book, told Vulture that she was hoping “it would be a very brown-skinned actress, because there’s so little opportunities in these big movies for darker-skinned actresses.”

In the same year, Stenberg revealed in an interview with CBC that they stepped down from Black Panther, noting that in a cast of dark-skinned actors playing Africans, the casting of a biracial American wouldn’t have made sense and that they “recognize 100 percent that there are spaces that [they] should not take up.”Euphoria actress Zendaya addressed the issue at a Beautycon Festival panel in 2018, saying “I am Hollywood’s, I guess you could say, acceptable version of a Black girl and that has to change.”

In playing Beth Andrews, Love experienced the sort of internal struggle that confronts mixed-race people every day: the question of whether she was “Black enough” or “too white.” It can be difficult to negotiate a sense of identity between two immovable categories. Her frustration is only exacerbated by the fact that the industry bends rules for white actors playing ethnic roles, but not the other way around. She uses Scarlett Johansson’s role in Ghost in the Shell as an example.

“Scarlett can clearly play anything that she wants; she can play a tree,” Love says, referencing an interview where Johansson said that as an actor she should be “allowed to play any person, or any tree, or any animal because that is [her] job.” (The actress has since claimed this quote was edited for clickbait.) “But Japanese women can only go out for Japanese roles to be taken seriously,” Love says.

Adachi explains that the role of ethnicity in the casting process needs to change in a way that makes parts more accessible to a broader range of people, while still protecting the authenticity and integrity of the stories where ethnicity is fundamental. “I always want actors being seen as actors first because that’s what we’re putting ourselves out as,” she says. “I’m not putting myself out there as an Asian woman, I’m putting myself out there as an actor. But I also feel that if you’re telling an authentic story, you should be specifically looking for actors of those backgrounds.”

There is value in sharing personal stories that we don’t hear enough, but this doesn’t have to be the only way for racialized actors to appear on screen or on stage. Reimagining who can be a superhero, a mermaid, a princess, or a doctor could make the casting process a more even playing field for everyone.

Months after Kenneth Tynan dyed his hair black, he can’t say that the change resulted in him booking any Asian roles. His agent chalked it up to a slow summer for the industry, but Tynan isn’t so sure. He’s still hoping for more opportunities to play someone closer to himself, an experience he had last summer that he refers to as “grounding.” The short film was called Two Lonely Kids and Tynan played a mixed-race boy named Todd who, like him, is Chinese and Irish. In the film, two mixed-race people discuss the loneliness that comes with feeling disconnected from their families.

“It felt like I wasn’t necessarily playing a character, but I was kind of playing a different part of me that needed to get out,” he says. For now, Tynan is happy to let his natural hair grow back. He’s still learning how to live with his roots.