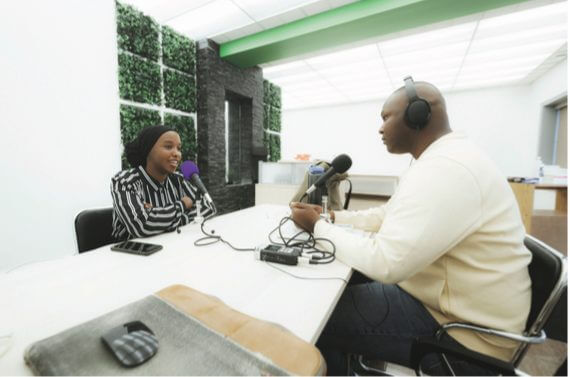 When George Floyd and Breonna Taylor were murdered by police in the United States, sparking protests across the world, Avnish Nanda, an Edmonton lawyer, approached Bashir Mohamed and Oumar Salifou with an idea for a podcast investigating anti-Black racism and policing in Edmonton. Within a week of launching in June, Is This For Real? had raised over $4,000 (U.S.) per month on Patreon.

“We wanted to take the social issues that were happening in the moment and then make them relevant in a local context,” Salifou says. “I think there’s a big misconception that racism is an American problem and that police brutality and racism, and anti-Black racism, is an American problem. And I think that Canada has its unique problems when it comes to having systemically racist institutions that exclude and actively hurt Black and Indigenous people and all people of colour.”

“We have to make people understand that when the police say that they’re being criticized for a problem that happened very far away, they’re ignoring the fact that there’s a long history of really bad things that have happened to people—violence inflicted on people, murders, different systems of oppression that have kept people down—that are unique to our context,” Salifou says.

Threaded throughout the investigations is an emphasis on the personal—Salifou and Mohamud ground the podcast in their experiences growing up Black in Edmonton and interviewees are given ample space to share their stories without interruption. In ep. 4 of the podcast, titled “Protect Our Children,” Mohamud says, “We want other people to take a step back and—rather than just feeling shock and shame and these emotions that would limit them from learning—to kind of hesitate and just take it all in and process it slowly as we go.”

In future seasons, the Is This For Real? team plans to investigate anti-Black racism in other institutions. “Knowing the fact that in most mainstream newsrooms there are very few Black people, it’s amazing to have the opportunity to do a project that’s getting the support that it’s been getting, and being able to have the editorial control to actually tell the stories how I think they should be told,” Salifou says.