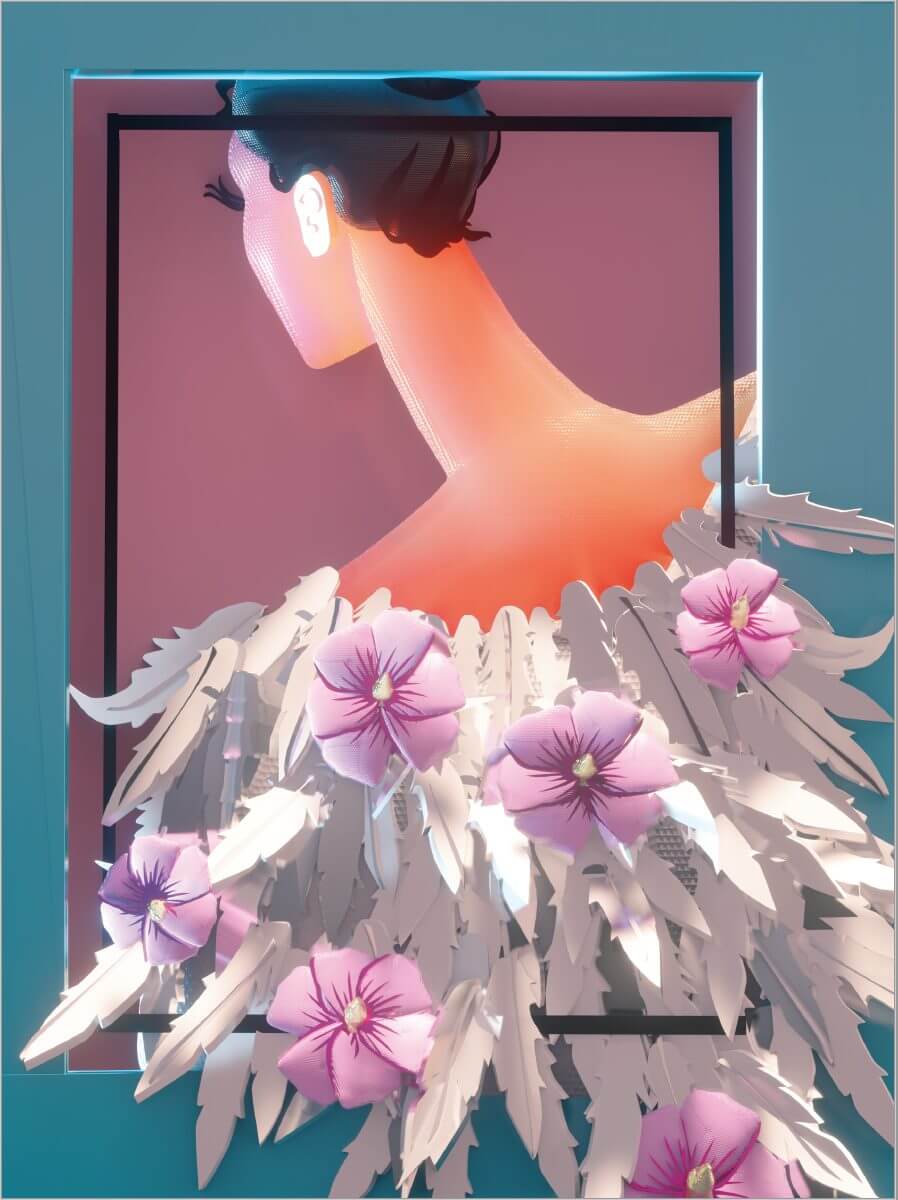 A quarter million Korean adoptees live (or have lived) around the world. Aren’t our black eyes so cute when they get pushed up by our cheeks as we smile for the photo displayed at the office? Don’t we garner the most likes and applause on those mommy blogs when we’re sent to show-and-tell in a hanbok? And how about when we blossom into comely-but-not-too-popular teenagers, the best of both worlds, already imagined in our parents’ alma mater stripes?

But what then, when shortly after that, we become grown Asian people all by ourselves, expected to navigate the ways our genders and sexualities and races collide without any practice or community or guidance? What do we do at that moment when we transform into the uncontrollable exotic beauty of our own mothers’ worst nightmares? At the moment when we start to be the headliner and no longer the opening act, the sidekick, the stage prop—but also when we find ourselves alone in a world that is already licking its lips?

I was around twelve or so when I started to peel photographs of myself from the albums stored on the bottom shelf of my bedroom armoire. Back then, there were these thick cardboard pages coated with an adhesive that yellowed over time. A sheet of crackling cellophane smoothed over top always had creases and bubbles and folds. There was one album for each of the first three years I lived in Canada. I recognized my Canadian mother’s kindergarten teacher penmanship labelling the top right-hand corner of every book. Probably part of a box set, the albums featured the same illustrated girl on its cover. On one, her blond curls were pulled back into a ponytail and she was on her tummy with her arms folded and her chin resting on her interlocked fingers. She was so cute. She looked like my Canadian sister. She looked like our mother when she was little herself.

There grew a disordered pile of photographs curling into themselves at opposite corners, their backs still grimed with residue.

My first night with my new family.

Held on one hip by a grinning moustached uncle who faced the camera.

My pregnant mother’s nervous smile. The same one she still offers today. The awkwardness of trying to hold one baby and carry another soon to arrive.

A rare glimpse at the grandmother who took me into bed with her when everyone else was alarmed that I remained awake through the night. I was a baby. And my body was still fourteen hours ahead.

The earliest days of my life in Canada.

The back of my hand as I reached for a dimpled yellow ball gently held in the teeth of a smooth-haired dog.

A post-baptismal brunch when the defrosted top tier of my parents’ wedding fruit cake was served with English Breakfast or Earl Grey and milk.

The series that captured the weeks following that time I closed a board book on my face and tore the skin off the tip of my nose.

The taming of wild hair into thick pigtails and blunt-cut bangs.

Sitting on the slippery brown couch, with the quilting and the white flowers, my new sister’s bonneted head rested on my lap, the bottom of my patent leather shoes unscuffed.

No one questioned my excavation project. I don’t know what happened to all those sepia toned images. I refilled the albums with pictures of wild animals cut from childhood magazines.

This year, I taught a university course entitled Race, Fashion, and Beauty. I did it because Black, Indigenous, and other People of Colour (BIPOC) are innovative and creative and playful and beautiful, for ourselves and for our kin. But it is a risk because someone might say, “You’re so beautiful” in one breath and in the next, “Your kind is so beautiful.” Or they might ask, “Can’t you take a compliment?” and then, “Can’t you take a joke?”

I overheard that the students, well, some of them, were afraid. They were afraid to say the wrong thing and afraid to do the work. They were upset that mine was the only course that fit their timetable. They were irritated that they were asked not to cite white scholars. They suddenly acknowledged that whiteness is a race in order to avoid this, but only then. They were angry that they were told that in the class BIPOC speak first and choose first.

I tried to shrug off all the ugliness. I tried to be beautiful.

My campus office has a window. But outside my window is a wall. Sometimes, when I consider the closedness of my view, when I count the years I’ve been here, I feel angry at newer colleagues who bask in natural lighting. But then, I wouldn’t want to be watched.

The walls of my office are covered in photographs printed from Korean and Japanese magazines. Asian femmes pout down from all four walls, their bodies twisted into gorgeous impossibilities. Many are not conventional beauties, but have the absurd and curious loveliness so feted in the fashion industry.

Once, a student came to office hours. Like many do, they admired the exquisiteness lining my space. “Complimented” my bravery. Asked me if it was me in all the photographs.

I learned about the skepticism of a colleague who works at another university. She said that doing beautiful things, doing things to make beauty, was a gimmick. She said that it distracts from politics. I was confused because to me, politics can be done through beauty. And beauty is political. And anyhow maybe she’ll one day understand that someone like me, someone afraid to be exchanged or returned or rejected or something else, must always, always exist through beauty-making.

One summer, I was asked to speak at a culture camp for Korean adopted youth and their parents. I was cautious of the fragile audience. One man, fittingly a lawyer, laughed and declared himself the devil’s advocate. But his daughter, who was a teen at the time, came to me with her friends later on and asked me how to curl her eyelashes. The next day, their white mothers also came to me and asked to help them make their children feel beautiful.

There was another girl a few years younger. Her prettiness was irrefutable. She was shy and away from the older teens and I told her she was beautiful. Her mother said, “It doesn’t matter if she is pretty. She is smart.”

Ever since that time I’ve thought hard about what that girl’s beauty signified to her white mother. Why it was so threatening. Seen as exclusive from intelligence. I’ve thought about how isolated we sometimes feel, how lonely and how ugly. I remembered the pressed powder I’d steal from my own white mother’s drawer when I was that girl’s age and how it smelled like rotted flowers but still I’d dust it on my face to feel lovely. The ache and dry of unblinking wide eyes. The experiments with lemon juice that Seventeen magazine promised would lighten my hair. I remembered how my parents’ friends complimented my Canadian sister’s cuteness and my studiousness when we were young. I remembered how receiving no words confirmed my ugly. And how special attention was rationalized as a need for diversity as opposed to a desire for me in particular. I remembered praying for freckles and arm hair and eyes like my sister’s that turned green when she wore green and blue when she wore blue and grey when she was angry.

What was the danger of telling that girl she was pretty? Is it the same danger in telling myself I was too? Is it a reminder that there are things we are gifted from our Korean mothers that no one else can take credit for?

I was in my late twenties when I met her. I knew she would be beautiful. My Korean mother wasn’t smiling in the photograph that was our introduction but still, she was beautiful. Her eyes were serious and black. She wore yellow.

She stroked my hair when we reunited face-to-face. Her hands were in my hair and she said, “I’m sorry,” and then, to the translator who stood off to the side, “she’s prettier than in her pictures.” Later, as we sat next to one another on the agency couch, she laughingly confessed to the social worker of me: “I used to have the same eyes.”

One time in Seoul, I traced the tip of my finger across my mother’s lips. She asked, “weh,” in that lilting way that Korean women do, but I didn’t stop. I traced the shape of all her features and she didn’t blink.

My youngest Korean sister was there. Our mother asked me, through her, if I’d let her gift me with the day surgery that would give us matching eyes.

My mother calls me “ippun ddal” and sometimes “ippun aeggi” in her singing voice when we speak on the phone. “Pretty daughter,” she says, “pretty baby.”

People were always looking and guessing and holding me in place, holding me down, with both those acts. When I was small, they asked questions about the exotic lands I came from, its fiery food and the black-haired women who made it. As I grew older, it was prolonged glances, comments about Woody Allen. A neighbour who made me feel shy in my stomach. Children who reached for their mother’s hands, hid behind them, without breaking eye contact with me. My solution was to enrobe myself in ostentatiousness. To convince myself that I invited, curated, revelled in spotlight. I made myself into the main event, always smiling, always laughing, lips glossed and hair piled high.

At some point I left my hometown and was told I was valuable all by myself but it was too fast. I was reckless and felt powerful and at once it drew people to me but it also made me aloof.

Today, I live differently in my body. A calm acceptance and affection for eyes I used to widen, of skin I used to powder, hair I used to bleach, transforms beauty-making into pleasure.

Whenever that person I love very much tells me I possess a certain “swanness” and I conjure the duckpond of my earlier life.