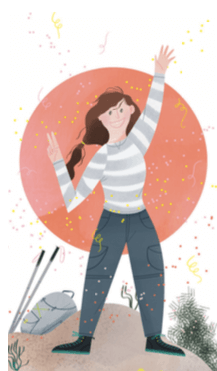 It’s been exactly 30 years since since you last subjected me to evaluation, but your quartet of badges still populates my worst nightmares. In the name of promoting healthier attitudes toward personal fitness, you terrorized an entire generation from 1970 to 1992. Your arrival every May coincided with nothing but dread: I lived in fear of the flexed arm hang, meant to measure upper body strength, which I never managed to exhibit since I lacked the bicep force to lift myself above the bar. Even when my gym teacher hoisted me up, my muscles held me up for a humiliating grand total of two seconds, before I plummeted to the floor with my entire class watching.

It took me decades to recover from the shame of my fitness test performances. Excellence, gold, and silver badges, remained squarely beyond my capabilities, but in my wildest childhood fantasies I longed for scores that would at least earn me a bronze. Instead, I received a hideous participation pin. I’ll never forget my endurance run in Grade 8, where the gym teacher didn’t even wait for me to finish; apparently my score put me right on par with seven-year-olds.

The final year I endured the traumatic test, either the powers-that-be abolished the plastic participation pin, or someone fudged my results enough for me to finally qualify for a bronze badge. But by that point, I was done with fitness for life and tossed the badge in the garbage instead of asking my mom to sew it onto my winter coat.

You didn’t just make me feel bad about my body, but I developed an antipathy to the word “fitness.” For years, your test convinced me I was weak and unathletic, and made me fear that exerting myself outdoors would result in yet another failed attempt at a high-intensity sit-up marathon or an embarrassingly short long jump performance. Everything I learned about grit and perseverance, I learned through encouragement and positive reinforcement, not through a test that reinforced the fact that I was uncoordinated and didn’t have a competitive bone in my body. For a bookish kid who excelled at learning languages and playing the piano, you made me fear my body by constantly reminding me it wasn’t fast enough, strong enough, agile enough, good enough.

The first time I was scheduled to hike a mountain at an artist residency in New Hampshire, I nearly cancelled on my friend at the last minute. Who was I to think I could finish a seven-mile largely-uphill loop when I barely qualified for a bronze Canada fitness test badge? I showed up at the foot of Mt. Monadnock because my friend promised that if it was too hard for me, we’d stop. “But you’re strong,” she said. “I’ve seen you bike up and down the rolling hills. You’ve got this.” I’d never heard the word “strong” applied to me and stared at her with a mixture of shock and gratitude. I spent much of the seven miles panting, but I refused to stop. This wasn’t me aching for a senseless metric that had little to do with my body’s ability and potential; this time, I felt the real strength of my body when I put one foot in front of the other, felt my legs hold me up and carry me with purpose, determination, and—dare I say—grace, all so I could see the stunning view from the top.

Now that’s the magic of a body’s fitness. And it has nothing to do with your cheap embroidered badge.