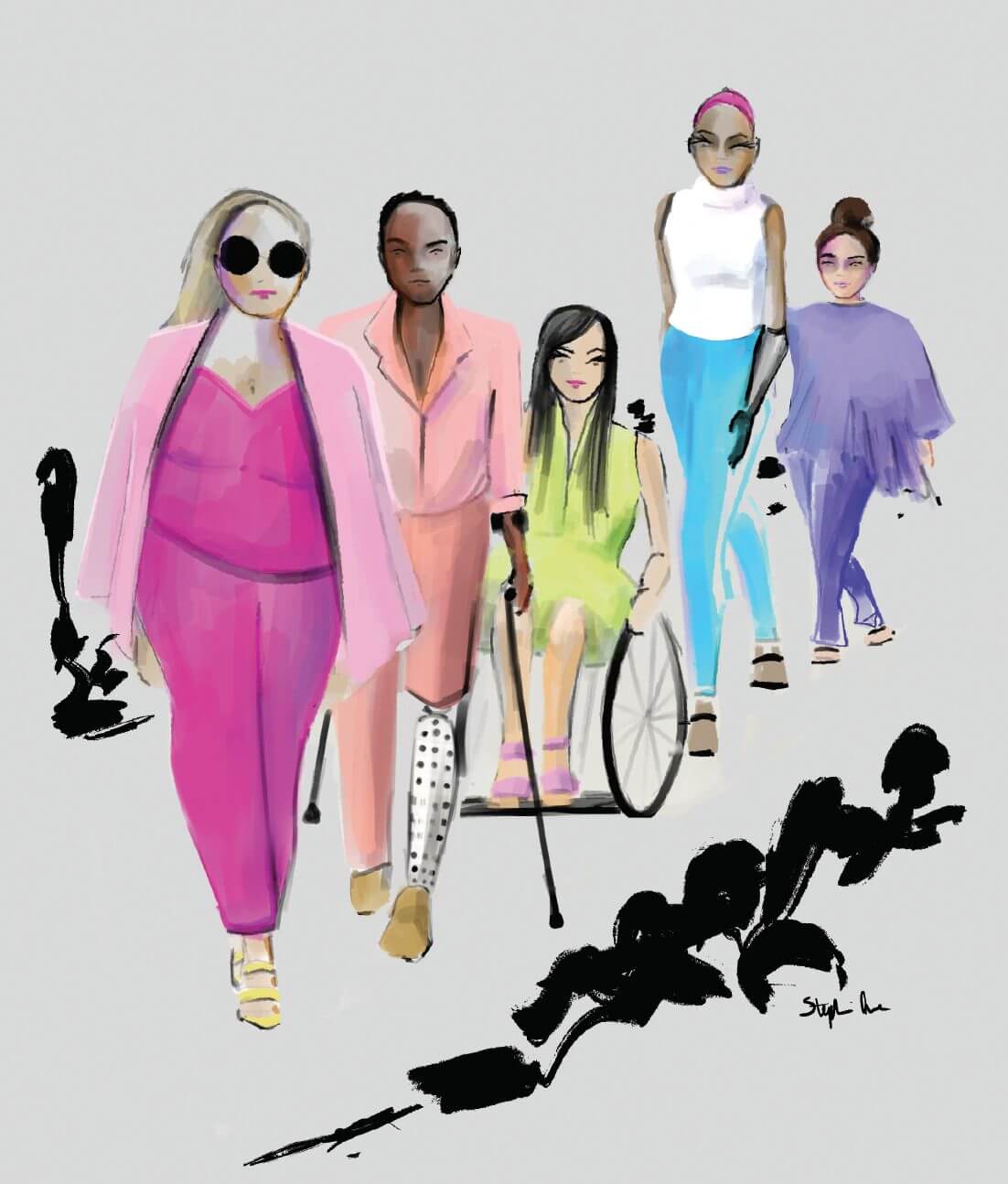 The fashion industry still has a lot of work to do when it comes to inclusivity. Often, when we discuss the lack of diversity—race, gender, body size, or disability—we think that the work of inclusivity has to start on the runways, in the boardrooms, or in editorial spreads. While it’s true that those changes need to be implemented too, if we want to truly break the societal norms in the fashion industry, we need to start in the classroom first where tomorrow’s designers can learn to design for all bodies.

In 2016, it was reported that the clothing manufacturing industry in Canada was worth $24.95 billion(U.S.), and although stats have not yet been released on what the industry has made to date, it has been forecasted to increase to $30 billion by 2020. Even with the steady increase in revenue in the industry and call-outs for more inclusivity to all facets of the business, fashion education programs throughout Canada have largely remained untouched.

From George Brown School of Fashion and Jewellery in Toronto to LaSalle College in Montreal, programming has largely remained unchanged, offering the same fundamental courses including pattern making and creation, construction, business management, and styling—to name a few. According to data compiled in 2015, 19.8 percent of those who graduate end up finding employment within the industry, which means that schools have the ability to shape students’ relationships with how fashion is produced and who it is made for.

In 2018, Ben Barry had just been appointed to become the incoming Chair and Associate Professor of Equity, Diversity, and Inclusion at the Ryerson School of Fashion, located in Toronto. In an interview with the Toronto Star he explained how, prior to being appointed, he told the Ryerson search committee that he hoped to revolutionize not only their fashion education program, but the industry and the world.

Fast forward to 2020, and Ryerson is in the midst of rolling out their new mandate that cultivates inclusion, equity, and decolonization in the field of Fashion Studies that helps students enrolled in their fashion programs. Barry hopes that by showcasing to students the marginalization and barriers some face in fashion, in the classrooms at Ryerson, they will be able to help shape and introduce new fashion norms by facilitating more learning experiences and discussion.

“I think that this approach is fundamentally why teaching students to design for diverse bodies and to think about diverse bodies in liberatory ways is the sort of way forward to really shift fashion education,” explains Barry, noting, “Education is really the birthplace of the thinking and the practices of the next generation, and it shapes the future of the industry.”

However, Barry’s approach to fashion education is quite unique in Canada. Many times, for changes to take place in the classroom, students will often have to advocate for themselves and call attention to the fundamental imbalance of representation within their program offerings, and the industry itself. In 2016, Nayyara Chue, a fashion design student at Parsons School of Design in New York City, petitioned to the school that she would be unable to finish her collection, as they didn’t have plus-size mannequins. When interviewed for Dazed magazine, designer and Parsons student Sinéad O’Dwyer mentioned that when she worked towards her BA in fashion design, beauty and thinness were ingrained within the
school’s culture.

Alysia Myette, contract lecturer at the Ryerson School of Fashion shares, “Students, especially now, have their finger on the pulse of social movements … and they’re just so much more vocal about the changes that they want to see happen … they’re using their voices in a really proactive way.”

Heather Clark, program coordinator with the Wilson School of Design at Kwantlen Polytechnic University in Richmond, B.C., recognizes, though, that like Chue at Parsons, many students are seeking more from their institutional educational program offerings.

“One of the challenges is that in a four-year undergraduate degree program, there is only so much that you can teach students,” she says. She explains that in the program they try to provide students with a good foundation of skills, so that once in the field they can start shifting and applying those skills as they see relevant.

But Clark realizes that some students who vocalize the need for more programming on body diversity and inclusive fashion are necessary. “As faculty, it’s up to us to go off and think ‘how do we help support these students?’” One of the first steps for faculty members to start teaching students about the different range and types of individuals, including plus-size bodies and disabled bodies, is to mentally reframe who should be included in the industry.

Myette believes that this ultimately becomes the biggest barrier for faculty members and a huge disadvantage for students. “A lot of the times when you bring in instructors from the industry, they’re bringing their own set of biases; they’re bringing their own understanding of what they know of the fashion industry and what works and what doesn’t, which then can influence what they teach in the classroom,” she explains.

For many students who are just getting starting on their careers, they don’t see themselves represented in the curriculum being offered. For many, the colleges and universities they are attending don’t feel like a safe or inclusive space to make the changes necessary, design the collections they want to see in the world, or even be themselves.

Hilary MacMillan, owner and designer of her namesake line, graduated from Blanche Macdonald in Vancouver in 2009, a creative arts college focused on hair, makeup, and fashion design. While she found the program useful, noting that her program included courses on construction, draping, and other skills, it was up to students to expand their studies outside of the school setting.

MacMillan became interested in designing for plus-size individuals, and introduced plus-sizes to her spring 2020 collection. Prior to its launch, she spent a considerable amount of time on research and development, since she had no formal training in school. She chatted with individuals who regularly purchased plus-size clothing, and also purchased garments to deconstruct, so she could examine how to construct patterns for differently shaped plus-size bodies all on her own. “I just tried to gain as much information as I could to figure out what was the best path for [our brand]. A lot of people think that it is just sizing things larger and that’s it. But there is a nuance to it,” MacMillan explains.

Similarly, Izzy Camilleri, the owner and designer behind IZ Adaptive, started designing ready-to-wear items professionally in 1984. During her time in school, Camilleri was taught the basics, which she explains gave her the tools to do whatever she wanted with her lines. It wasn’t until 2005, when Camilleri was approached by a wheelchair user to create custom pieces, that she became aware of the challenges of creating adaptive clothing. She says, “I didn’t realize what it actually took to get dressed and how limited her options were around clothing. So it was through that work I opened my eyes to a very big problem.”

Camilleri explains that making adaptive clothing is so much more than just designing, pattern making, and drafting; it’s also learning to understand the issues that people with physical disabilities face. This is why more than ever, it is important to challenge the status quo and have faculty open the door for marginalized groups to be represented and make inclusions outside of the industry norm in the fashion education system.

“I think that it’s almost that we also need to step back even further because part of this is about re-educating faculty and the majority of faculty,” explains Barry, noting that for many faculty members, they’ve grown up in a culture that praises specific types of bodies and is rampant with cultural appropriation. Barry believes that a refusal to represent or acknowledge certain groups can cause real harm to students, and the industry at large, by not training faculty to adapt. “There’s a process of learning—sort of educating them—and then there’s also practical consideration because when they went to fashion school, they didn’t learn how to design for a diversity of bodies or individuals. So there’s also training that’s required for them to learn these skills and practices to integrate that into their own courses and classrooms.”

While issues of diversity and inclusion are conversations that individuals like Ontario-based Métis artist Justine Woods and influencer Marielle Elizabeth in Edmonton, Alberta have been sparking online and offline, discussions like these often miss pointing out just how pivotal a role the fashion education system can be in changing things from the inside out. Jess Sternberg is the owner and CEO of Free Label Clothing and developed her line of ethical and size-inclusive clothing after working as a buyer and manager at a Toronto clothing boutique. Although Sternberg did not attend fashion school, she looks at many of the courses offered as a chicken-and-egg situation. “You know, we’re not being taught it and it’s not prevalent in the industry. So maybe I didn’t go to school, but what I needed to know wasn’t taught, like how to be size-inclusive or sustainable.”

Sternberg has a point: with a lack of accessible information available to students throughout Canada, at what point does the industry influence the education system? She further adds, “If we’re demanding that we want size inclusivity and we want more sustainable options for fabrics, fashion schools and the industry need to create more information and lessons on that because there’s a demand for it. We can blame the brands, we can blame the customer, we can blame the educational system, but somebody at some point has to make the choice to say ‘screw it and we’re going to go for it.’”

Right now, all throughout Canada, the training grounds for tomorrow’s crop of designers are bleak, but there is room for improvement. Clark admits that the sustainability conversation has been an amazing gateway for her faculty to open the door to conversations within the fashion industry, sharing they’ve had to explore how to make something that’s inclusive to all in terms of taste, what they need style and size-wise, and purposed for what they need the clothing to do. “There’s so many different components—and I’m not just talking about environmentally sustainable, but sustainable to our lifestyles as individual people. Everybody needs clothing!” she says.

While the system won’t change overnight, plenty of schools are slowly starting to implement the basic groundwork of diversity and inclusion into their programming, with Ryerson University leading the way in Canada. Right now, it’s time for these conversations to both enter and hopefully evolve continuously in the classroom. Myette says, “You really don’t know where the fashion industry is going to take you and learning to work with different bodies, learning to work with different personas, learning different facets of the industry and how you can play a role in different facets of the industry just gives you so much more of a well-rounded experience to enter the fashion industry, as opposed to just having a very narrow idea of what you’re going to do and closing all those other doors that could have otherwise been open.”