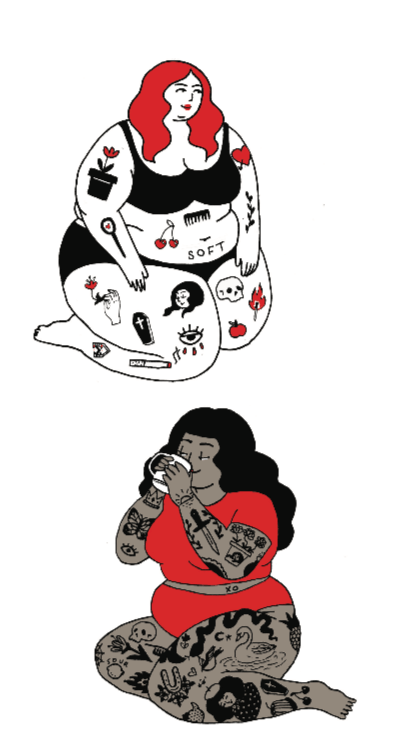 With bare midriffs, tattoos, and mermaid tails—or no clothes at all—Mollie Cronin’s unapologetic characters ride alligators, eat pizza, swim, lounge on cheese, and raise their middle fingers. The Halifax cartoonist distills millennial dating woes, the perils and joys of East Coast living, and the complexities of gender and body politics in her honest and funny illustrations.

Cronin challenges preconceptions of beauty, serving up celebratory representations of fat bodies under her pen name, Art Brat Comics. She started sharing her colourful, witty, and diverse characters on Instagram in 2015.
“I was going through a moment where I was embracing fat positivity at a time when I needed it in my life,” she says. “Pop culture was catching up to that also.”

Since then, Cronin has reached nearly 20,000 followers, and more than 30 fans have had her work tattooed on their bodies. The positive reception is clear in the comments section: “There’s nothing like the pleasure of seeing depictions of characters that look just like yourself. Thank you!” and “My six-year-old self thanks you for this image.”

Beyond selling her own prints and merchandise, Cronin recently partnered with Australian clothing brand Cutting Shapes Club—an indie label which makes “Fat Threads 4 Dope Babes”—to create a limited-edition custom dress featuring her fat babe drawings. Cronin’s illustrations have also been featured on the Hulu comedy series Shrill, in the book Happy Fat: Taking Up Space in a World That Wants to Shrink You by Sofie Hagen, and in Halifax’s alternative weekly newspaper The Coast.

Now, she’s planning to take Art Brat Comics even further, with hopes of publishing her own book of semi-autobiographical cartoon strips that bring fat positivity to the fore. “We’re in a really great moment for fat positivity and understanding that body positivity actually has its root in fat acceptance,” Cronin says. She’ll keep doing her part to push that movement forward, one shameless babe at a time.