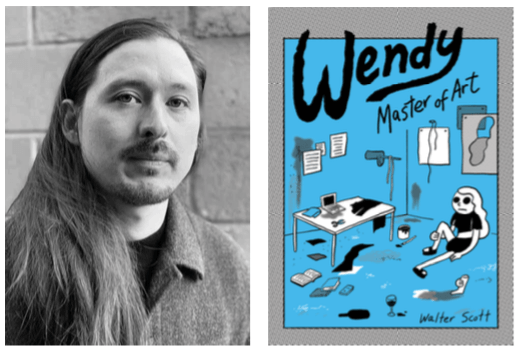 Wendy is far too high. She’s discussing her next steps in life with a semi-nude couple in a club in Berlin. If all goes well, she says, she’ll be attending an MFA program that fall. And she does end up attending the program—though in true Wendy form, she’s hungover and late for class on her first day.

Welcome to Wendy, Master of Art, the latest addition to Walter Scott’s comic series about the trials and tribulations of art-scene it-girl Wendy. Since 2014, readers have followed along as Wendy attempts to infiltrate the Canadian art world, find love despite her poor taste in partners, and maintain friendships while keeping up a party-forward lifestyle. Scott’s latest book, released in June, sees Wendy enter an MFA program in Hell, Ontario, in an attempt to discover her authentic artistic voice.

Scott, like the rest of us, was self-isolating when we spoke on the phone this spring. The Kahnawá:ke- born, Kanien’kehá:ka artist used to live in Montreal, where early Wendy comics were set, though he’s now based in Toronto. On top of releasing the new Wendy, the comic artist, multidisciplinary artist, and writer had a busy season planned: a group show at the MAC Montreal, a solo exhibition at Montreal’s Centre CLARK, and a sculpture and video showing in Edmonton. Scott’s multimedia sculptures use conflicting materials— fake hair, vinyl, neon, shoes, and tote bags—to express a cohesive aesthetic that is uniquely his own.

His schedule has, of course, quieted along with the rest of Canada’s arts world. When asked if he would be using this time to work, Scott said, “I’m not really motivated to make drawings right now. I have set up a studio in my kitchen, but I haven’t done anything yet.” It’s a struggle to be productive during a global pandemic. And this new reality feels a world away from the one Wendy inhabits.

Scott, who attended the University of Guelph’s MFA program, captures the tense yet supportive energy and personalities of art school almost too well. “It’s based on my experience at Guelph. There’s no getting around that as much as I want to pretend this book is pure fiction.” He gives Wendy a new semi-chaotic cohort, which includes an anxiously-woke white man, a far-too- established artist, and classmates who are obsessed with really long string, colour, and fermenting rot, respectively. “I wanted to express moral relativism,” Scott says of Wendy’s new surroundings. “I want readers to be confused about how they feel about these characters. No character can be pure good or pure evil.”

The same can be said for the toxic, yet charming, protagonist herself who Scott treats—despite her vague upper-middle class white privilege
and frequent bad life choices—with a sympathetic kindness. In this new chapter of Wendy’s life, we watch as she navigates her struggles with her creative practice, grad school, the difficulties of maintaining old friendships, and an exploration of polyamory.

Wendy, Master of Art is hilarious and heart-wrenching, chronicling a journey that explores Wendy’s selfishness, heartbreak, and attempts at honest communication. Her process of self-growth ultimately parallels her artistic journey, as she searches for a way to express herself legitimately. Setting this moment of growth in grad school is no coincidence, says Scott. It’s an environment that relies on people “being overly con dent while still being open to criticism and change.”

“I feel like the book is about Wendy growing up and starting to take more responsibility for herself and for other people,” he says. “She’s having these experiences that require her to really communicate—she has to figure out how to talk about how she feels. By the end of the book you’re seeing someone who can discuss their feelings. The real love a air is the one she has with herself.”